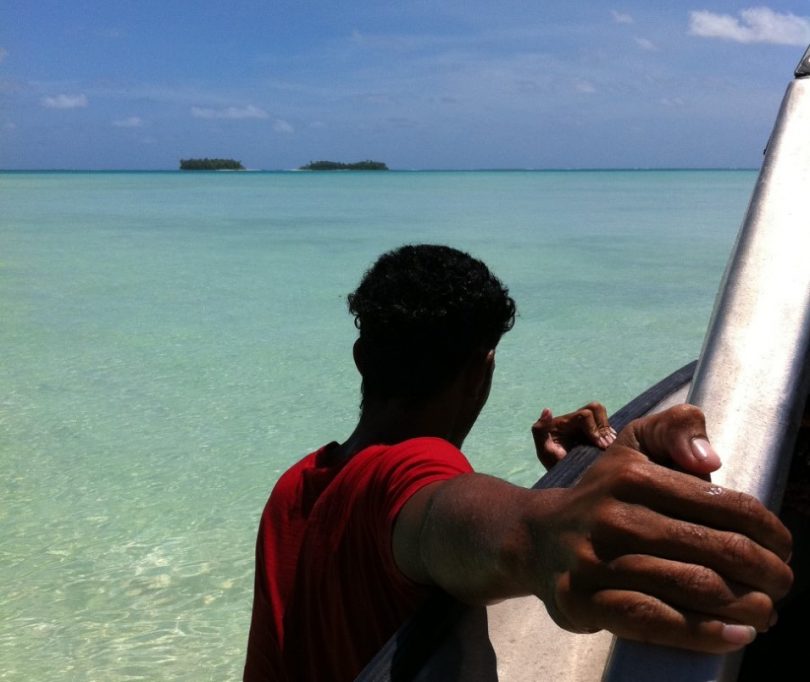 In this fortnight’s Memorandum of Understanding podcast we dip into Tom Bamforth’s rollicking and deeply humane book, The rising tide, which recounts his travels across the Pacific islands. As well as speaking to Tom, we conduct ‘key informant’ interviews with Tataua Pesi and Linda Kenni, Tom’s former colleagues from Tuvalu and Vanuatu, respectively. All three are wonderful raconteurs, telling stories that run the gamut between humour and pathos. You can access the podcast here.

This is Tom’s second book; his first, Deep field, was a set of stories recounting epiphanies, small achievements, pratfalls and complexities encountered whilst working as an aid worker in the aftermath of natural disasters.

Our conversation made us think whether his two books are outliers in terms of stylistic approach. While there is certainly lots of scribing about aid, little of it is written in the first person, recounting in a chatty and unmediated way what is going on inside a development worker’s head and heart. When we think of first-person aid memoirs only three immediately come to mind:

One of us has contributed to this boutique genre, having written a book on Timor-Leste that gave voice to the thoughts in his head as to whether all this international help was actually helping.

It’s a difficult and lonely business writing a book – George Orwell called it a “horrible, exhausting struggle, like a long bout of some painful illness.” That might explain the slim offerings but, then again, it’s still striking how many memoirs emerge from other tricky, sensitive, time-intensive professions as diverse as surgery to working on oil rigs. What is different about the calling of development that smothers the courage to write?

We recall a conversation with a good friend working on an aid project recently who said “we are always walking a tightrope, trying not to offend the host country or the ‘development partner’ we are working for….development work is a gig economy and you can’t afford to burn bridges.”

One of the ‘cutting room floor’ conversations we had with Tom sought to probe just why aid workers were so reticent to put thoughts down on paper. Gordon began by asking him whether he’d been marched into the aid-equivalent of the principal’s office and given a ticking off.

Tom: I haven’t really, I might have just been fortunate. And the organisations I’ve worked for have often been the touchiest about advocacy. The approach that I took, and I don’t know if this is the right approach, but it seems to be one that has worked for me, is don’t tell people … it’s easier to apologise than to seek permission. If you sought permission from colleagues within a very hierarchical and bureaucratic aid sector, then inevitably you would get someone at some stage saying ‘no’, or there’ll be so many qualifications that it wouldn’t be worth doing. So I took the view which was that you do it, and if it works, people will say, “Great, congratulations, well done”. And, and if it doesn’t work, you might just have to say, “Oh, terribly sorry”.

Gordon: Thinking through my own experience, my own book earned me the opprobrium of a few aid apparatchiks, but it was hardly ruinous. Apart from my two children, it’s my proudest achievement. From where does the reluctance to write stem?

Tom: I think this reticence is a recent phenomenon. When I was first becoming interested in development, which is a little while ago, it was still the period where people had quite strong political convictions and fuelled by activism; they’d spent lots of time in different places, they spoke different languages, they were part of the cause, in a way. And I suspect that what’s happened is the aid agencies got bigger, they’ve become more hierarchical, they become more administrative, they become more reflective of government, they’ve become increasingly dependent on government funding, rather than public subscription. When I started, it was people who were coming out of international politics, anthropology, development studies, and so on. But now the choice of course for aid apparatchiks is the MBA. That fundamentally changes the way you view the world, the kinds of skills that you have, and the interests that you have.

Gordon: I can remember an early part of my career, when I was part of a team working on an evaluation. We thought our draft was a good product. Half an hour after we sent it, we got an email back with the line, “This reads like something out of Newsweek” and in my callowness, I initially thought that was high praise. But in fact, it was an instruction to go and rewrite the thing completely.

Tom: It’s weird, isn’t it? People get involved in aid to begin with because they want to be involved in the messiness of the world, but this all gets sort of pushed off into these kind of administrative boxes on the spreadsheet. I find it really weird, defiant of reality.

Given that this podcast gives a platform to the human realities behind the quarterly report, the question of why there remains such literary silences is an important one. It’s certainly not for a shortage of stories to tell, or lack of value in telling them. What then is holding us back? Reflections on this, and more, in the latest Memorandum of Understanding.

Listen to the podcast here. Read an excerpt from Tom’s book on Devpolicy here.

Julia Bergin is the producer for the 'Memorandum of Understanding' podcast.