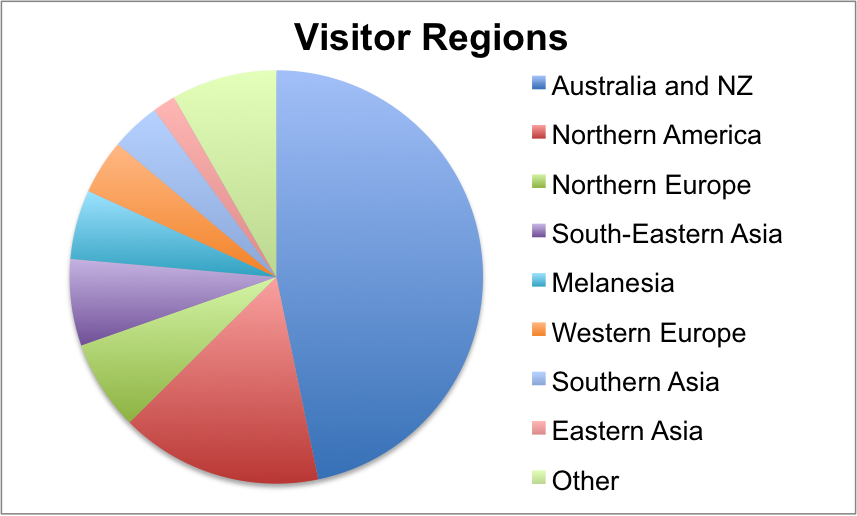 Visitors to the devpolicy blog by geographical region

On this the last day of January 2012, as the year gets underway in earnest, we at the Development Policy Centre want to share with you with you our top monthly blogs from 2011. They provide a good illustration of the sort of subjects we blog about, and are worth reading in case you haven’t already.The blog launched in late 2010, and since then readership has steadily grown. The pie chart below shows the geographical breakdown of our readers. The top countries are all developed nations: Australia, the United States, the United Kingdom, New Zealand and Canada. After that, however, it’s India, the Philippines, PNG, Indonesia, Fiji and Vanuatu.  It’s good to have these Melanesian and Asian countries in our top ten, and we aim to expand our Pacific readership this coming year.

Visitors to the devpolicy blog by geographical region

Here is our list and summary of the most popular Devpolicy posts each month so far, starting with the blog’s first full month, October 2010:

Oct. 31 2010 ‘Seven patterns and trends in Australian aid’ by the Development Policy Centre

This post looks at the scale and distribution of Australia’s rapidly expanding aid. Governance is the biggest spending area, but the environment and infrastructure sectors are growing rapidly. The shares of aid going to technical assistance and multilaterals are declining, and the average project size has fallen.

In this very popular post, Bob McMullan highlights some key findings from the Advisory Group’s report, reflects on lessons learnt and details some future steps. He describes how $100 billion might be raised through various taxes including international transactions and transport fuel taxes.

Cash on Delivery aid is a new proposal for improving aid effectiveness by only paying for verified results. Richard Curtain argues that donors should take a hands-off approach to the actual delivery of aid, and only pay for incremental units of progress.

Jan. 11 2011 ‘Aid to schools in Indonesia’ by Marc Purcell, Executive Director for the Australian Council for International Development

Marc Purcell defends Australian aid to schools in Indonesia after Robert Cannon’s critical opinion piece in The Australian. From building schools to improving the quality of education, our aid is making a real difference.

Feb. 20 2011 ‘Development policy of the future and why we aren’t ready’ by Todd Moss, Senior Fellow from the Center for Global Development

Todd Moss identifies three key trends in development: fewer poor countries, the growing importance of non-traditional donors, and the end to the scaling up of aid financing. This will cause a shift in focus towards value-for-money public goods and non-aid tools. Moss believes we aren’t ready yet.

Terence Wood busts the myth that reducing overhead costs is synonymous with improving aid, and lays out the harms it can cause.

With AusAID’s funding of scholarships $153 million and set to increase, Matt Morris calls for a genuine, evidence-based discussion on how to improve the value-for-money of aid-funded scholarships.

This post tackles the often-neglected task of reporting on and analyzing the Australian aid budget. The aid budget is growing fast, focusing on governance and education, and scaling up aid to Indonesia and Papua New Guinea.

From Harry Truman and the founding of the World Bank, to new innovations in aid, Terence Wood considers what we should have learnt: focus on poverty reduction, adopt an evidence-based approach, be mindful of fads, have reasonable expectations and commit for the long-haul.

Jul. 19 2011 ‘After the Review: how to make sure the Australian aid program saves lives’ by Garth Luke, Senior Researcher for World Vision Australia

Garth Luke calls on the Australian Government to live up to it’s commitment to saving lives by refocusing on health, an area where the knowledge and technology exists to prevent significant suffering, yet a funding gap remains.

Aug. 12 2011 ‘The quiet revolution in Australian aid: a blog for Tim Costello and Aid Watch’ by Stephen Howes, Director of the Development Policy Centre

Despite claims that over 40% of Australian aid goes to Australian companies, only 21% of 2009-10 aid actually went to private contractors. Stephen Howes discusses the changes in delivery modes which have occured within the aid program and calls for the debate to move on.

Sep. 6 2011 ‘Challenges for the final 1% until there’s no polio in the world’ by Chris Maher, Acting Director of Polio Eradication Research at WHO

The global burden of polio has been reduced by 99% over the last 23 years, but the areas where it remains are remote or difficult to work in. Chris Maher discusses the progress and challenges remaining in eradicating the final 1%.

Joel Negin finds that the Australian aid program in Zimbabwe demonstrates the impact of a focused and well-funded strategy in a difficult and fluid environment.

Nov. 3 2011 ‘Where have all the evaluations gone?’ by Stephen Howes, Director of the Development Policy Centre

Stephen Howes queries the low output from AusAID’s Office of Development Effectiveness, which in the two years preceding the post published only a single evaluation – the Annual Review for the 2008-9 year.

Matthew Dornan summarizes and reviews Fiji’s 2012 budget. He commends economic policies and the proposed tax reform, but argues that the budget fails to adequately address public sector reform issues and the problems faced by the National Provident Fund.

Kathryn Zealand is a Researcher with the Development Policy Centre.