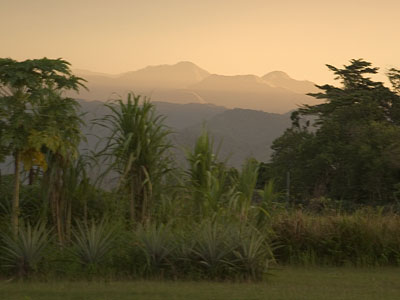 Commencing in the late period of preparation for Independence, a genuine PNG voice emerged in the colonial legislature, after which Michael Somare’s Pangu party took power on the eve of self-government in 1972. A consultant team, the Faber Mission, was tasked to recommend policies for an independent PNG. Keith Hart, originator of the idea of the ‘urban informal sector’, was a member of the visiting team. He observed that economic informality, while emergent in rural areas, was still very largely absent from PNG’s urban areas. The Faber Report placed informality at the heart of its strategies for development, later encapsulated in the ‘Eight Aims’. This was a set of national goals, described succinctly by a contemporary as requiring ‘self-sufficiency, reduction of social and economic inequalities and economic control in the hands of nationalists’. The goals were adopted enthusiastically (if only briefly) by the new government and incorporated in modified form into the Constitution as the ‘National Goals and Directive Principles’ (where they remain today, as a dead letter). Among other political projects, the Eight Aims inspired an attempt, ultimately unsuccessful, to ‘formalize the informal’ in the PNG urban economy.

Early positive reaction to the Faber Report among Pangu and its allies may be seen as a reaction by indigenous politicians and intelligentsia, along with an influential coterie of expatriate advisors, against the distributional effects of the policies of ‘accelerated development’ pursued by the colonial administration during the 1960s. This was a period of rising racial economic inequality, with a declining share of national income flowing to indigenous people, even though their employment levels and real incomes were improving in real terms. The Faber Report acted as a catalyst, giving point and direction to collective discontents, in which issues of localisation and the ownership and control of business were also elements. This is not to suggest that enthusiasm excited by the Faber Report was either universal or long sustained, but rather that a particular serendipity marked its timing and reception.

Faber and Hart met the new Cabinet in August 1972, after it had received the Report. The other team members had dropped out by then, for fear ‘that their consultancy careers would be wrecked by [what they viewed as] … the lunacy [we] advocated’. As Hart recalled, Somare said, “Gentlemen, before you came, we only knew of one model for development. Now we know there are at least two”. Hart’s account provided some insight into inter-departmental rivalry in Canberra at the time: ‘The Ministry of External Territories … had been a Country party fiefdom. But, with the help of the Commonwealth Treasury, we found that PNG was a redistributive device for siphoning A$500 million a year from taxpayers to three Australian interest groups: trading oligopolies … civil servants … and [Australian] farmers …’.

The team’s proposals to change this situation encountered opposition: ‘What we proposed in the way of grassroots development linked to an emphasis on the income of nationals’ was seen by a World Bank official as ‘a “racist” deviation from orthodoxy. Our proposal to renegotiate the terms of the Bougainville copper mine … upset everyone: the colonial administrators who had arranged a notorious give-away, the operators … [and] the World Bank who believed a contract was a contract, the Department of External Territories and so on’. It was in this ‘climate of confrontation’ that the team ‘found itself reduced to two’. As Hart later learned, the Commonwealth Treasury was ‘the source of our appointment in the first place’. Perhaps Treasury had doubted the future political stability of an independent state continuing on the trajectory of accelerated development, courtesy of a minerals boom whose benefits were distributed inequitably. And perhaps Treasury was not unhappy at the prospect of an increased ‘take’ for PNG, which would ease the new state’s transition from dependence on Australian aid.

The last gasp of ‘accelerated development’, set out in a White Paper, was rebuffed by the PNG Parliament in mid-1972 and thereafter events moved quickly. Tony Voutas (one of Pangu’s ‘founding fathers’) recalled that a small working group was deputed by Somare to draw on the Report to work up a draft set of policy aims. ‘Quite deliberately’, because of Cabinet’s distrust of the old guard, ‘there was almost no consultation on these aims with senior [expatriate] public servants’. ‘By imposing policy guidelines on the public service, the Somare Ministry was democratizing government’. By year’s end the old Administration’s colonial planning office had gone, the platform of ‘Eight Aims’ based on the Faber Report had been announced, and a new Central Planning Office was gearing up to implement it. In February the PNG parliament ‘took note’ of the Report and endorsed the Eight Aims as ‘the basis for economic planning in the coming years’. The idea of informality also found its way into the constitution of the new state, in that the ‘National Goals and Directive Principles’ were drafted with several clauses implying the duty of government to support and encourage informal economic activity.

Before long, however, a degree of ambivalence emerged, reflecting disparate elements within the governing coalition. It became apparent to Tony Voutas that the Eight Aims were contrary to the ‘entrepreneurial ambitions’ of some ministers, although their ‘pseudo-socialistic overtones’ continued to be ‘acceptable at the level of public rhetoric’. Mark Lynch, Cabinet Secretary 1972-77, believed that ‘the evolution of the … Eight Aims … was probably the closest the Ministry came to expressing a general ideological stance’. Otherwise, the open contest of ideas was muted by ‘the unstated knowledge’ that Cabinet consensus was ‘too fragile to withstand deep ideological debate’. This fragility, and the divergence of opinion at its core, would prove to have negative implications for many objectives based on the Eight Aims, not least the objective of stimulating informal activity. Much later, Ross Garnaut summed up what happened: ‘in response to an extraordinary concentration of income and wealth in the hands of a small expatriate community, redistribution of high-income employment and business ownership from expatriates to Papua New Guineans was the one distributional focus of the Eight Point Plan to be pursued vigorously and effectively’. A new domestic inequality replaced the racial inequality of the late colonial period.

For some years from 1973 two members of the ‘coterie’, Loraine Blaxter and Peter Fitzpatrick, collaborated to pursue a vigorous campaign for government initiatives to stimulate informal economic activity, and for the removal of a raft of regulatory impediments to it. In 1973, at the height of enthusiasm for the Faber Report, Michael Somare had announced a thorough review of all current legal restrictions, to make it easier for Papua New Guineans to engage in informal economic activities. That year the duo prepared papers announcing ‘A New Strategy for Development’ and dealing with a wide range of activities and restrictions. Activities discussed included liquor trading, passenger motor transport, street trading and marketing, and small scale enterprises. Blaxter and Fitzpatrick listed a catalogue of impediments to economic informality, including ‘penetration of expatriates into areas that are normally confined to the informal sector’, ‘comprehensive domination by expatriate interests of most areas of retailing and services’, and ‘a plethora of laws’ that effectively debarred indigenous participation. The geographer Croz Walsh later noted that they had ‘made 38 specific proposals for the development of an informal sector’, but that ‘none of these proposals … had been implemented by 1983’. He remarked wryly that the informal sector had grown nonetheless, without any government encouragement.

Walsh characterised ‘the Blaxter School’ as having proceeded ‘from the assumption that major economic changes can be accomplished by decree’. This required ‘assuming there was the political will‘. But, as we know now, that will never existed, since the ‘fragile consensus’ on the Eight Aims could not overcome the combination of entrenched interests and bureaucratic prejudice — both expatriate and indigenous — arrayed against the informal sector. One expression of this was a generalised political concern about ‘urban drift’, showing itself in periodic motions and resolutions in the legislature — in 1964, 1969, 1971 and 1973 — in which authorities were called upon to take action against urban migrants (to the extent of seeking to institute South African-style ‘pass’ regulations in 1971). Even indigenous parliamentarians were so imbued with the colonial ‘idea of the town’ that they were affronted by the visible manifestations of street informality (as they continue to be in 2015). Blaxter and Fitzpatrick had engaged in one of the earliest attempts at ‘formalizing the informal’ but this proved fruitless. The lesson from their failure was that informality, rather than being nurtured, would have to arise in the usual manner — as pushback against the forces of bureaucracy, vested interest and prejudice.

John D Conroy is a Visiting Fellow at the Crawford School of Public Policy at the Australian National University. This blog is extracted from Devpolicy Discussion Paper 45, ‘Informality’s elusive thread: policy debates in late colonial Port Moresby’, which can be found here.