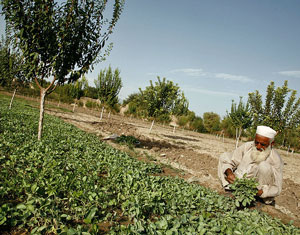 The final report of the inquiry is now available. The findings of the report were presented by Chair of the Inquiry, Senator Alan Eggleston at Devpolicy in late 2013. Details here.

23 submissions were made to the Afghanistan aid inquiry, and the Committee is now drafting its report. All of the submissions, including ours, can be found on the Committee’s website, and we’ve also loaded a slightly revised (corrected) version of our submission onto the Devpolicy website. This blog post provides an overview of our main points. As we stress in our submission, we are not experts on Afghanistan. But we know enough to make a few, selective points.

Aid to Afghanistan is huge. Afghanistan is the largest recipient of aid in the world, receiving $US6.5 billion in 2010, almost twice as much as any other country.

The stated objective of Australian aid is inappropriate. The official objective is “building the Afghan Government’s capacity to deliver services and provide economic opportunities to its people.” Capacity building is the holy grail of aid, but as Terence Wood recently highlighted in this blog post, the ability of aid to build capacity is severely limited. The roots of shallow capacity are typically political rather than technical. Government capacity shows little sign of improvement in Afghanistan, so if that is the objective of Australian aid, then it has failed.

Fortunately, the capacity building objective is inconsistent with the nature of most of the Australian aid activities taking place, which support the actual delivery of services. It would therefore be more accurate to describe the objective of the aid program as being to “assist the Afghan Government to deliver services and provide economic opportunities.”

Budget support provided by Australia and other donors to the Government of Afghanistan works and should be considered for use in other country programs. There are very few cases of Australia providing budget support, certainly not on an annual basis as it does to Afghanistan, through the World Bank managed Afghanistan Reconstruction Trust Fund (ARTF). The commitment to budget support in Afghanistan is substantial. From a total AusAID expenditure of $56 million in 2009-2010, $25 million was in budget support for the Afghan government.

It is widely accepted that most of the corruption involving aid in Afghanistan has occurred with aid distributed outside the government system. By contrast, the ARTF, which has been extensively and publicly reviewed (see here), seems to be an effective aid delivery mechanism. There are risks and downsides to the provision of budgetary support, but the experience in Afghanistan suggests that there are also strong benefits.

The heavy reliance on NGOs to deliver services in Afghanistan also appears to have worked well.The figures we have seen suggest that 23 percent of Australian aid to Afghanistan goes through NGOs. While we do not have access to independent evaluations, overall it would seem (and is consistent with international evidence) that these organisations do a good job of delivering health and education services. While more work would be needed to establish this with a high degree of confidence, it should also be asked why AusAID hasn’t made more use of NGOs to deliver services in other fragile settings, including PNG, where church-based service-providers have been neglected.

Despite these positive features, the realities of the Afghanistan situation suggest that additional aid is unlikely to have high returns. It is well established that the primary determinant of aid effectiveness is the effectiveness of the recipient country government. Given the very weak performance and capacity of the Afghan government (the individual efforts of various politicians and bureaucrats notwithstanding), not to mention the difficult security environment, it is highly likely that overall aid effectiveness in Afghanistan is low, at least on the margin. Afghanistan’s high level of aid dependency must also give rise to the suspicion that whatever benefits aid brings there are also serious costs including Dutch Disease, rent-seeking, and high transaction costs.

Aid to Uruzgan should be discontinued or at least wound back. It is very hard to see aid to Uruzgan, other than perhaps humanitarian aid and support for NGOs for service delivery, as effective. We say this primarily because it is very hard to see Uruzgan as remaining under Afghan control after the Transition Period. The extreme insecurity in Uruzgan also challenges effectiveness. The delivery of aid by the Australian Defence Forces is also unlikely to be sustainable, as it seems to be heavily focused on building infrastructure (roads that may not be maintained, schools that may lack teachers).

There is also heavy use in Afghanistan of AusAID staff and experts hired through the Australian Civilian Corps as Development Advisers. They have apparently helped Uruzgan officials develop a Provincial Development Plan. While the staff involved should be commended for their bravery, this sort of technical assistance is almost certainly a waste of money (and, more importantly, an unnecessary risk to human life). Technical assistance has a very poor track record in weak-governance environments. It is typical that such efforts focus on planning documents. But in difficult environments, plans are usually irrelevant.

Strategic objectives are also important, but unlikely to have been achieved, at least in Uruzgan. It would be misleading to assess the effectiveness of Australian aid only with reference to a development objective. The stated strategic objectives are to prevent Afghanistan becoming a safe haven for terrorism and to support Australia’s commitment to the U.S.

One of the most comprehensive “hearts and minds” aid studies available for Afghanistan has been undertaken by The Feinstein Centre at Tufts University across five Afghan provinces, including Uruzgan. In Uruzgan, the Feinstein study found that corruption, tribal politics and the heavy handedness of international forces have all negated any positive effects of aid. Aid was perceived to be poorly distributed and highly corrupt, and therefore unable to win the support of the population. The lesson from this and other experiences appears to be that only where aid is developmentally effective will it also be strategically effective.

Given the usefulness, yet infrequency of Parliamentary reviews of aid, and the rapid expansion of the aid program, Parliament should establish an Aid Committee. One Parliamentary inquiry into aid every six years isn’t enough. The Independent Review of Aid Effectiveness argued for “a parliamentary committee or sub–committee focused on aid and development.” Whatever the Committee finds about Australian aid to Afghanistan, we hope this is one recommendation they endorse.