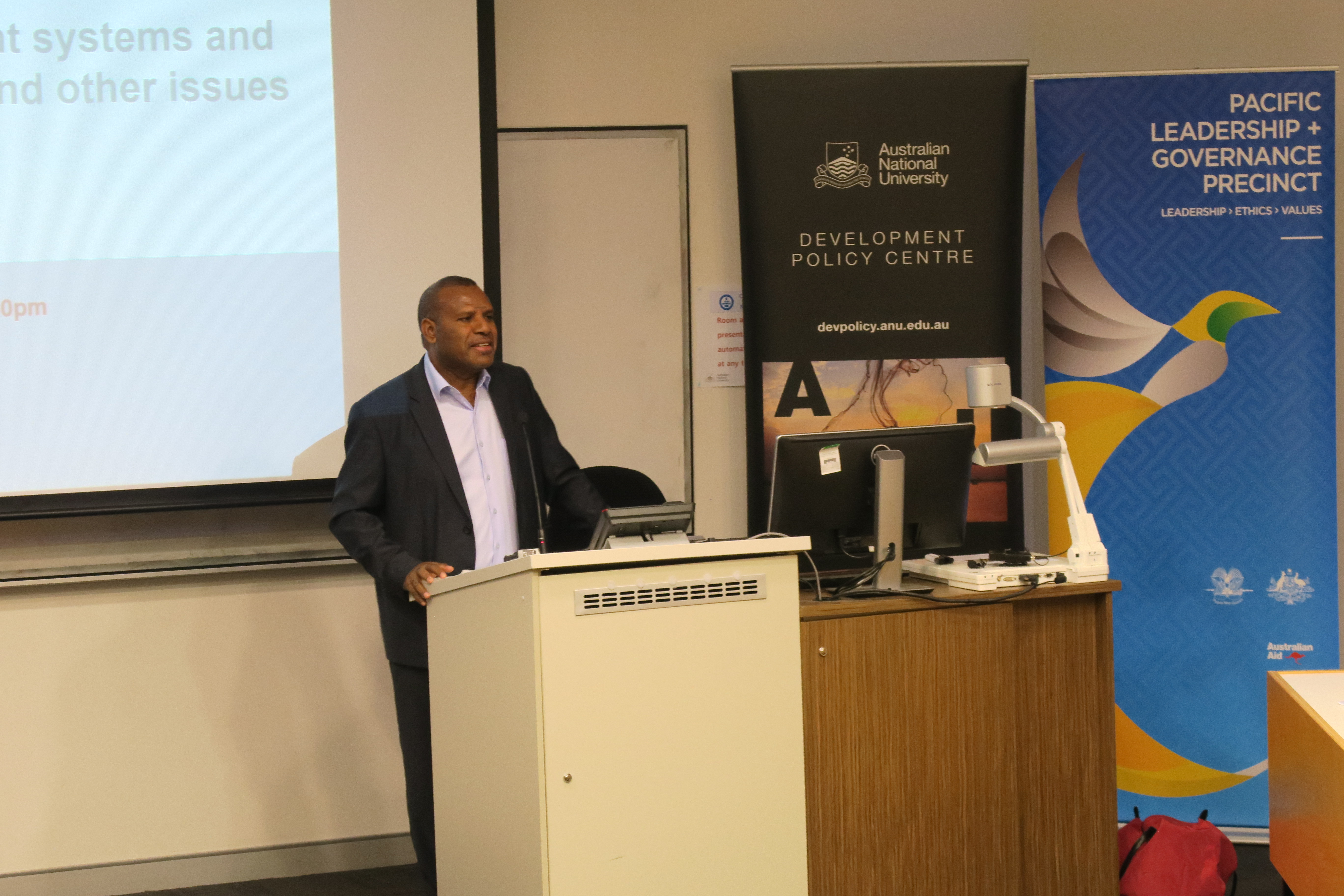 The elephant in the room: addressing corruption in PNG

There is a general consensus that Papua New Guinea (PNG) is in a deep financial crisis. The country is in desperate need of help from both within and outside PNG. The political and bureaucratic leadership is working hard to sustain the country under this financial climate.

The Government has reached out to the international community for financial assistance. There are some positive responses, which is encouraging for the country. However, this is a temporary measure and not sustainable. The real challenge is dealing with the elephant in the room – corruption – which permeates all aspects of PNG society. Unless PNG tackles this problem head on, any external or internal interventions to financially rescue the country will be futile.

The new Government has acknowledged that improving governance is crucial to the future of PNG. The Government is now embarking on several initiatives to improve governance systems to restore confidence in the government and its systems and processes. The Constitutional and Law Reform Commission (CLRC) has been party to many of these initiatives and it is in this context that I would like to share with you these proposals.

If PNG is to improve governance and encourage investment in the private sector, and strengthen its bureaucracy to deliver basic and other services to the people, the new Government must first of all combat corruption as its number one priority.

Corruption is a major problem for PNG. In 2016, it ranked 136 on the Transparency International’s Corruption Perception Index, the same ranking as Guatemala, Kyrgyzstan, Lebanon, Myanmar and Nigeria. As one of the most corrupt countries in the world, PNG has a huge task ahead to improve this image. PNG signed on to the United Nations Convention Against Corruption on 22 December 2004 and ratified it on 16 July 2007.

In 2011, the Government launched the National Anti-Corruption Strategy. After the 2102 National Elections, the O’Neill Government supported the establishment of an inter-government anti-corruption unit called ‘Task Force Sweep’ to investigate and prosecute crimes of corruption. This team was disbanded about two years later when the Prime Minister was implicated in a corruption scandal.

In 2015, the Parliament took carriage of the proposed ICAC Organic Law Bill. The Bill was referred to the Parliamentary Committee, and unfortunately that’s where it stayed.

The current Government has firmly resolved to tackle corruption. At the formation of the new Government (the Alotau Camp eventually formed Government on 4 August 2017), the Alotau Accord II was adopted, a political strategic plan to guide the Government through the five-year term of the new Parliament.

The Alotau Accord II sets out five priority areas for the new Government. These are: economic growth; infrastructure; law and order; education; and health. The Government acknowledged that to deliver on these five priorities, it needed to reform and strengthen the systems and processes of government. A key element of this strategy is to improve good governance – meaning fighting corruption!

The Prime Minister has publicly announced that the Government would like to introduce the Organic Law on ICAC either in this month’s sitting of Parliament, or in February 2018. The Minister for Justice and Attorney General, Hon. Davis Steven, has been tasked with finalising the ICAC bill for presentation to Parliament.

The key elements of the Organic Law on ICAC are:

There are three main criticisms of the draft Organic Law on ICAC: (1) power to arrest; (2) power to prosecute; and (3) unexplained wealth. The Government has listened and sought advice from police and the Public Prosecutor on the first two matters. In relation to the first issue, the police have explained that the Constitution and recent Supreme Court decisions declare that only police can make arrests when there are allegations of crimes.

In my view, the most critical goal at the moment is to establish ICAC and get it operational. The Constitutional Amendment establishing ICAC is already in force. PNG needs only to enact the Organic Law on ICAC to fully implement and operationalise ICAC. It is encouraging to note that the Government is serious about ICAC and wants to see it established sooner rather than later.

This is an edited version of a lecture given by Dr Eric Kwa, Secretary and CEO of the PNG Constitutional Law Reform Commission, at the Development Policy Centre on 15 November 2017. The full transcript of the speech is available here. The podcast is available here.

A copy of the draft Organic Law on ICAC can be found here. Feedback on this legislation is welcomed; please email Dr Eric Kwa at ericlkwa@gmail.com by 31 January 2018.