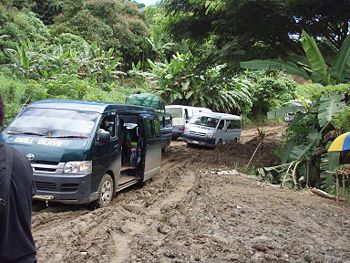 The very poor state of our national and provincial roads, non-existence of wharves and jetties in most maritime provinces and closure of many provincial and district airstrips stems from many years of maintenance neglect.

We are very strong supporters of Prime Minister O’Neill’s view that the failure to adequately maintain infrastructure is at the heart of the poor state of infrastructure in PNG (see here, here, and here). So what is the PNG government doing to address the problem?

A number of reforms are underway. The government has significantly increased funding for infrastructure, including maintenance and rehabilitation, which will help to address decades of underfunding (this blog post details funding in the roads sector). Institutional reform of infrastructure agencies, such as the Department of Works, is also occurring [pdf]. These reforms are guided by the new National Transport Strategy, established in 2013, which more clearly delineates responsibilities for various infrastructure assets. This is a big step in the right direction, although its benefits will depend on whether future governments adhere to the strategy. The establishment of the road fund and National Road Authority–which has been plagued by problems, as detailed here–is a reminder that institutional reform is not successful unless supported by political leaders.

Another significant reform is the proposed establishment of the Infrastructure Development Authority (IDA), which we wrote about last year. The IDA concept was originally promoted by Sir Mekere Morauta in order to “rehabilitate and maintain” infrastructure in PNG using proceeds from the LNG project. Since then an IDA Project Office has been established and a Draft IDA Bill has been released. While we were supportive of the IDA concept a year ago, recent developments raise a number of concerns.

The most important relates to the source of funding. A fundamental feature of the original IDA proposal was that it would receive secure funding from the Development Fund, which was to be part of PNG’s Sovereign Wealth Fund. In effect, this would have channelled revenues from PNG’s enormous LNG project toward infrastructure projects, with the roads sector likely to be a significant beneficiary.

It is our understanding that the government has now had a change of heart, and that the new Draft Organic Law on the Sovereign Wealth Fund will no longer include a Development Fund (this was confirmed by the Minister for Finance, James Marape at the PNG Update in June 2014). Instead the IDA will be funded through annual budget allocations from the government consolidated revenue.

In our view, this does not bode well for the establishment of the IDA. We consider reliance on annual budget allocations to fund IDA activities to be inadequate. The binding constraint for infrastructure development in PNG, particularly maintenance activities, is the availability of resources. An earlier post detailed how the road fund and National Road Authority had been unable to maintain PNG’s national road network due to a lack of funding. This, in turn, is a direct result of the government’s failure to establish an adequate funding source; occasional top-ups provided through the annual budget cycle have provided nowhere near the funding required for this task. Funding the IDA’s activities through annual budget allocations would subject it to the same funding uncertainty as the NRA. The potential for the IDA to suffer the same fate as the NRA, which is grossly underfunded and subsequently unable to perform its functions, is therefore very real.

We have noted previously that both the potential benefits and risks of an IDA increase with a more ambitious mandate–of the type adopted in PNG’s draft legislation. The potential for an IDA with a broad mandate to improve infrastructure management across the board–including in better design, construction, operation, maintenance and disposal of infrastructure–is clearly greater than that of an IDA that limits itself to conducting independent analysis/prioritisation of infrastructure projects. But the risks are also greater. One of the clearest, which we identified last year, is that an IDA with an ambitious mandate may duplicate the functions of other public sector agencies, becoming “another layer in an already inefficient and bureaucratic process for infrastructure development.”

Although the specific circumstance of the conflict in NSW is not relevant in PNG (rail is not an issue), the example does demonstrate the potential pitfalls associated with the establishment of an IDA with a broad mandate.

We are not arguing that conflict is inevitable in PNG, but the risk of duplication and conflict associated with spending decisions on infrastructure is real and needs to be managed. This will require strong leadership from current and future PNG Prime Ministers–leadership of the kind that the former NSW Premier failed to demonstrate.

So where does that leave us? What might the IDA achieve if established? A major activity of the IDA as currently proposed involves implementation of National Executive Council (NEC–Cabinet) decisions on infrastructure. Indeed, there are many bottlenecks in this process and the IDA has the potential to have a positive impact. One area we view as promising is the proposal for the IDA to undertake independent project procurement and tendering (a recommendation contained in our previous blog post) albeit subject to the provisions of the Public Financial Management Act. If approved, this new process would bypass the Central Supply and Tenders Board, which has a track record of creating major delays in the approval process.

We also see clear benefits associated with an organisation that has both the analytical abilities and independence to assess the economic benefits of potential infrastructure projects, and to provide advice on the prioritisation of government spending. The PNG Department of Transport already does good work in this space, as demonstrated by the National Transport Strategy, but the additional independence enjoyed by the IDA means that it is likely to be better placed to perform a similar function.

Whether this translates into better decision making is another question, which will ultimately depend on political leaders. The recommendations of the PNG Department of Transport and Department of Works are often not reflected in government budget decisions (something that also occurs in Australia – as demonstrated recently in the Australian Capital Territory). This is why it is important that IDA analysis is made public. The proposed legislation is deficient in this area. While requiring the IDA to prepare 20-year and 5-year infrastructure development plans, as well as sectoral plans, it also states that those plans may only be made public once they are accepted by NEC. Missing from the PNG legislation is a provision in the NSW legislation that states: “If the Premier makes any amendment to the strategies, plans and statements submitted by Infrastructure NSW … the Board may advise the Premier that it does not agree with the amendment and make that advice available to the public.” The absence of this provision weakens the independence of the IDA, and should be reconsidered by the PNG Government.

We would like to finish by returning to the issue of a lack of maintenance funding in PNG. We envision an IDA in PNG that has the analytical capability, independence and access to resources to ensure that PNG’s infrastructure is adequately maintained, thereby preventing the continuation of the build-neglect-rebuild paradigm that has not served the country well. In recent years, revenue from the resource boom in PNG has enabled the government to build new infrastructure and rehabilitate a significant amount of existing infrastructure–a process that is ongoing. With the resource boom having already reached its peak, attention should now turn to ensuring that PNG’s massive investments in infrastructure will be well looked after for future generations to enjoy.

Matthew Dornan and Anthony Swan are Research Fellows at the Development Policy Centre.