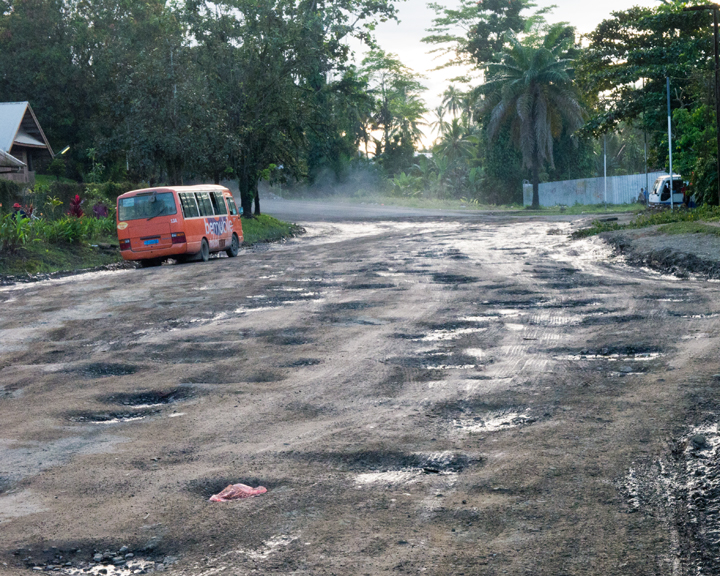 The PNG Government has in recent years significantly increased funding for road maintenance and rehabilitation – a positive and long overdue change, which I welcomed in an earlier post. This article details a less positive story: the establishment of the PNG road fund and National Road Authority.

The PNG road fund and National Road Authority were established to address the chronic underfunding of routine road maintenance in PNG. Legislation creating the institutions was passed by parliament in 2003, although it was not until 2008-09 that the NRA was formally established. In short, the road fund was designed to ensure that funding was available for maintenance of the national road network by hypothecating or earmarking revenues from road user fees and directing them toward routine maintenance. A new road agency, the National Road Authority (NRA), was to administer road fund revenues and maintenance activities. An independent board with road user representation would ensure that funds were used appropriately and not misdirected toward other activities.

In effect, these reforms were designed to de-politicise road management. A road fund removes the power of elected political leaders to determine the level of funding for road maintenance on a year-on-year basis. Instead, such funding is provided through the automatic transfer of revenue from road user fees (although the level to which this occurs depends on the nature and size of the road fund). So, underlying the concept is an acknowledgement that politicians have perverse incentives to direct funds toward new roads rather than (more cost effective) maintenance of existing roads; something that is evident in the actions of governments around the world (see for example the case of the United States).

These institutional changes mirrored developments in other parts of the world. Road funds had existed for decades in a number of countries, such as New Zealand and the United States. But their establishment really took off in the 1980s and 1990s as a result of World Bank efforts to improve road maintenance in Sub-Saharan Africa. It was also in Sub-Saharan Africa that the concept of second generation funds advocated by the likes of Heggie and Vickers emerged (see here for more detailed discussion).

How effective were these reforms?

There is a general view that road funds have increased maintenance spending in Sub-Saharan Africa, but not in other parts of the world where funds have lacked autonomy. Road funds have been most successful where accompanied by establishment of a road agency that is independent from the civil service and responsible for managing road maintenance activities (like the NRA). Not surprisingly, road fund ‘quality’ is also important. Better performing funds have been managed by an independent board, have been the subject of external oversight and audit, and have received sufficient revenue from user charges to manage section of road. An Independent Evaluation Group assessment of road funds concluded in 2011 that:

In practically all countries for which measures are available, there has been a significant increase in the percentage of roads in good condition”, but that “no road fund managed to cover all the maintenance funding needs.

In PNG, the road fund and NRA have achieved limited results due to the way in which they were established. The PNG road fund receives revenue from the earmarking of an existing levy on domestically refined diesel fuel, equivalent to 4 toea/litre – or about $16 million Kina per year ($7 million Australian Dollars). This is nowhere near sufficient to provide maintenance to sections of road for which the NRA is responsible, which according to the latest available annual report, stands at 2,000km. It is even less adequate for maintenance of other parts of the 9,000km national road network.

To put annual NRA revenue in perspective, $16 million kina per year represents less than 1.5% of total government spending on maintenance and rehabilitation of the national road network. No revenue is available from other sources, such as additional levies on diesel or other fuels, heavy vehicle charges, or vehicle registration fees. These measures were anticipated when the road fund was established, and some of were reportedly approved by the National Executive Council, but new levies were never established and user charges that were already in place do not accrue to the road fund.

This means that the NRA has been unable to assume responsibility from the Department of Works for maintenance of most national roads. This is unfortunate, in my view, because the road fund and NRA have shown great promise:

There are other criticisms of the way in which the road fund and NRA were established.  Concerns include: (i) lack of separation between management of the road fund and road agency (NRA), (ii) the diesel levy’s poor proxy for a user charge (diesel fuel in PNG is used not just for road transport but for electricity generation, mining operations etc. ), and (iii) the inability of the NRA to operate outside of the ‘public sector box’ (which is itself a consequence of a number of decisions by previous ministers).

But these issues are secondary to funding. It is funding that represents the binding constraint to the road fund and NRA performing the task for which they were established. NRA appeals for expansion of its revenue sources have gone unheeded, and subsequent requests for funding from the annual budget have been met with paltry allocations. This is at its heart a political failure. Successive PNG Governments have failed to support the establishment of an effective road fund and agency.

There are some signs that this may change in the future. The National Transport Strategy flags an expansion of the NRA’s role and funding base. This would be a positive development if it were to occur. Ultimately, what happens will depend on the decisions of political leaders. The NRA’s experience to date on expanding its funding base is no cause for optimism.

My next blog, written with Anthony Swan, will consider a more recent attempt at infrastructure management reform in PNG – the proposed Infrastructure Development Authority – and will argue that there are signs that it could face a similar fate to the NRA given recent changes to funding arrangements.