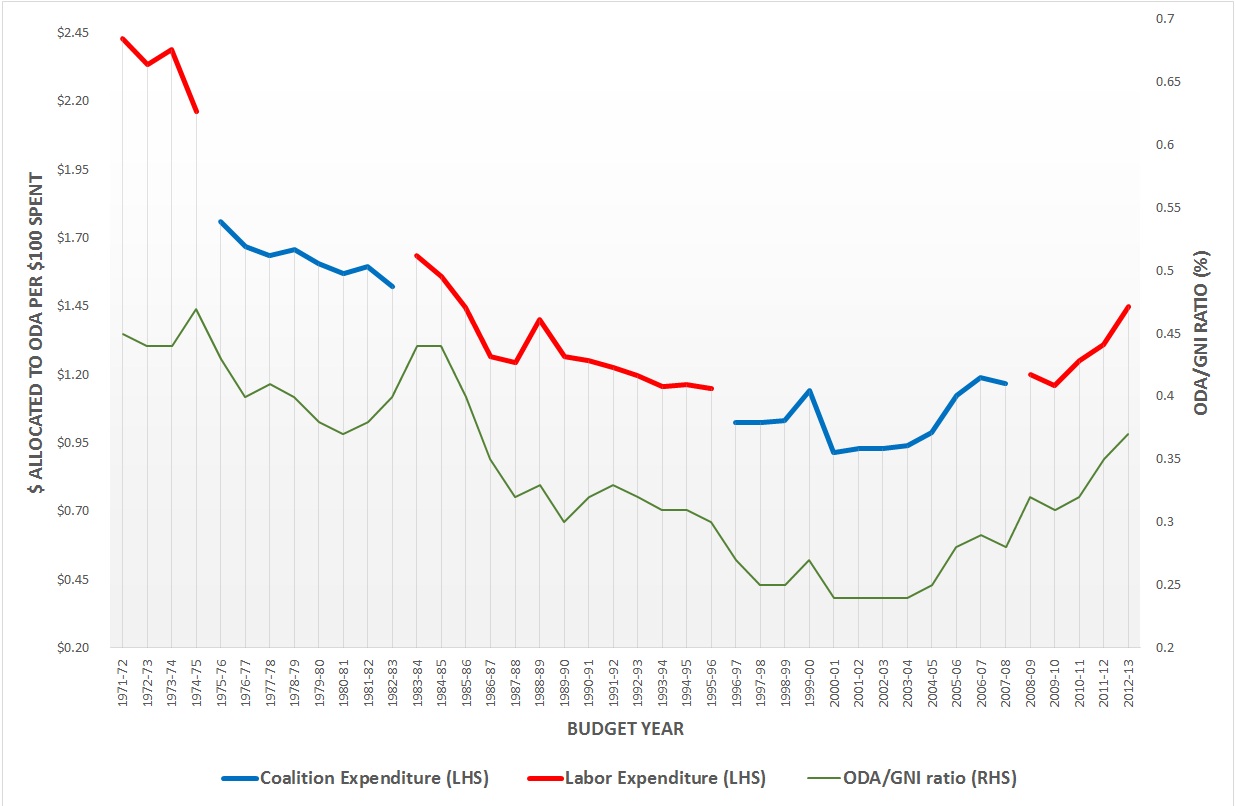 Given it’s budget time, those that work on international development issues are once again focused on that strange statistic, the ODA/GNI ratio, and the various targets, averages and historical trajectories related to it. It has become the standard for comparison of aid spending between countries, given it is adopted across the OECD, and reported on by the DAC. In essence it is seen as a benchmark for a country’s generosity and engagement with the developing world. But there are some obviously flaws with its use, for example it does not reflect on the quality of aid, and the delivery mechanisms used (ie donor countries’ domestic firms versus programmed aid through developing country budgets). Does it also truly reflect a Government’s commitment to aid?

The ODA/GNI ratio compares a Government ODA expenditure allocation against a much broader statistic on a country’s total income, including a range of factors related to personal and business income, which are beyond the direct control of government. Wouldn’t a more accurate numerator for GNI to reflect a country’s generosity be the total amount ‘gifted’ by a country (companies, individuals as well as Government)? This would reflect other flows to the developing world, including donations, philanthropic and CSR activities and even some forms of investment. The obvious problem with this is the difficulty in estimating the relevant data.

Another advantage of reflecting ODA expenditure against total Government payments is it is more easily communicated to the general public. How much of your individual taxes would you be prepared to see utilised to assist those less well-off in the poorer nations of the world? If you paid $10,000 in taxes do you think the Government should allocated $50, $500 or more of that to the developing world? How much do you think the Government currently allocates to ODA out of your $10,000 in taxes?

Below is a graph showing Government allocations to ODA for every $100 it budgets to spend. The graph disaggregates expenditure budget allocations to ODA under Coalition and Labor Governments, and demonstrates a change of government can result in a dramatic impact on the amount allocated to ODA from the in-coming government. It also depicts the ODA/GNI ratio. I have scaled this to include 0.7 % ODA/GNI which I think still is the official OECD target, with Australia’s recent commitment being to reach 0.5% by 2016/17.

ODA budget allocation for every $100 of federal government expenditure

The government expenditure ratio appears to closely align with the ODA/GNI line below, and the overall picture of a Government’s commitment towards ODA is not dramatically different.

So in answer to the question above, in the 2012/13 budget it was estimated that $1.42 out of every $100 it spends would be on ODA related activities. Therefore out of your $10,000 in taxes, the Government has decided to invest $142 into ODA (the 2013/14 budget has taken this up to $1.45 out of every $100 the government spends, or $145 in the case of this example).  More or less than you thought? It will be interesting to see what the actual outcome for 2012/13 is against this original estimate, but one would expect it be less given budget re-allocations during the year.

While the ODA/GNI is beyond its control, the priorities of budget deliberations during an election year will be clearly reflected in the ODA allocation to total expenditure ratio.

It would also be of interest to undertake an international comparison over time of this government expenditure ratio to see if this makes any difference to Australia’s international standing in terms of ODA commitments amongst DAC members. One would suppose countries where Government expenditure represents a greater proportion of GNI (e.g. Scandanavian countries) are represented better by ODA/GNI, whereas others may appear more generous under this alternate measure.

And in the lead up to the election, perhaps a more constructive conversation starter with the Australian public is to ask the question what percentage of their taxes would they be happy to see going to those less fortunate than ourselves in developing countries?

Angus Barnes is an independent consultant with 20 years’ experience in Australian aid and international development.

Angus Barnes has spent 20 years working on international and regional development issues. His 10 years with AusAID included involvement in a broad range of programs, including national and local governance, rural development, HIV/AIDS, peace building and private sector development. Currently, Angus is working as an independent consultant.