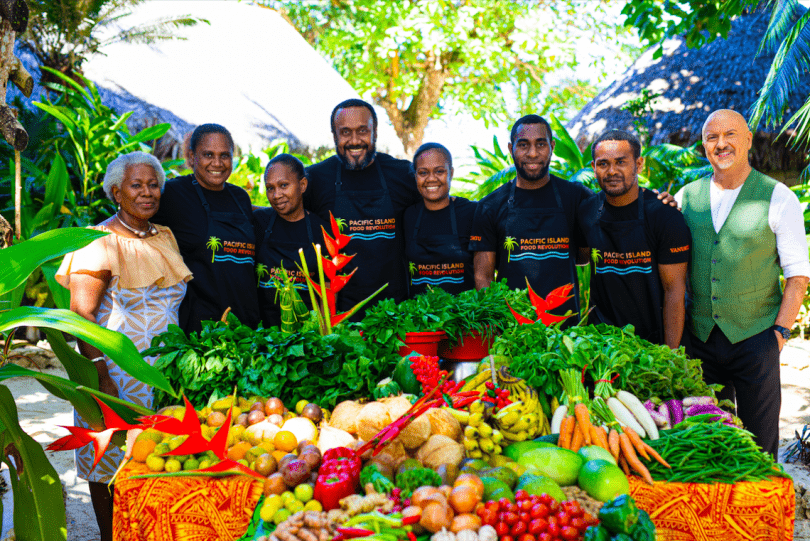 It was a great surprise and honour that Gordon Peake approached us to be the guinea pigs/first interviewees for Devpol’s inaugural ‘Memorandum of Understanding’ podcast. Gordon and podcast curator Julia Bergin have since encouraged us to buck the ‘literary silences’ and write about development in an engaging manner. ‘Use your zestiest voice’ was Gordon’s advice to us as we started piecing together this blog – apt advice since we wish to highlight the Pacific Island Food Revolution (PIFR).

We at the Timor-Leste Food Lab/Agora Food Studio are unabashed fans of PIFR. They have inspired us in our own work (here we focus on their work, not ours). Funded jointly by Australia’s Department of Foreign Affairs and Trade (DFAT) and New Zealand’s Ministry of Foreign Affairs and Trade (MFAT), for three years they have used the power of reality TV, radio and social media to celebrate the Pacific’s under-appreciated food heritage. PIFR showcases ‘food warriors’ from Fiji, Samoa, Tonga and Vanuatu over 12 weekly episodes as they create Pacific-inspired dishes to be tasted by regular hosts and guest judges. Birthed by a grant through DFAT’s now defunct and often maligned innovationXchange, PIFR is one example of where development and diplomacy harmonise.

PIFR’s innovation lies in employing a ‘social behavioural change communication’ approach to addressing food security and nutrition challenges in the Pacific islands. The program’s strategy is to ‘normalise’ positive behaviours such as cooking and eating traditional foods by associating them with the beauty of the Pacific islands, the glamour of professional cooking and the down-to-earthiness of relatable competitors. PIFR judges are typically respected Pacific figureheads including health ministers, chefs, athletes and even members of the Tongan Royal Family. They ‘nudge’ viewers towards healthier eating and cooking behaviours by fixing these aspirations firmly to Pacific family, church and cultural life. Viewers will notice that, in contrast to hyped-up, competitive ‘MasterChef’ and ‘My Kitchen Rules’ franchises, PIFR hosts and cooks exercise a vernacular, humour and tempo in tune with Pacific communities’ interactions.

The Pacific is home to the world’s highest rates of lifestyle disease, and dependency on food imports can be higher than 80% in some islands. PIFR acknowledges these crises without exhausting viewers to the point of helplessness. There are no banners, expert panels or ‘manels’, or text-heavy brochures in a language people don’t relate to. There is instead a subtler approach to embedding ‘awareness raising’ messages, only after viewers’ attention has been secured. Each episode has a theme such as seniors’ health or breastfeeding, reflected in contestant challenges and the guest judges’ manicured commentary. When screening in the Pacific, advertisement breaks are given over to organisations such as UNICEF for public health campaigns (note this is not the case for the series’ current screening in Australia on SBS ONDEMAND). The result is a product able to highlight solutions to the Pacific’s longstanding and serious issues with food without making its people feel like they are the problem.

In 2018, we joined PIFR and LAUNCH Food partners to learn how to apply behavioural economics principles to drive improved nutrition across the Indo-Pacific. We noticed then that New Zealand chef and PIFR host Robert Oliver and his Samoan colleague Junior Ulu had institutionalised communication that ‘dials down barriers’ by focusing on local solutions rather than seemingly insurmountable challenges. How would entrenching viewers’ feelings of helplessness change anything?

PIFR instead focuses heavily on ‘dialing up triggers’ by making eating local foods seem easier and sexier. The message is clear: if you are eating healthy local cuisine in the Pacific then you are cool. If you are not, then you are missing out.

Assessing long term impacts from a program like PIFR will be a challenge, especially within the constraints of time-bound funding cycles. Early results from surveys conducted by the Busara Center for Behavioural Economics are promising. 55% of study participants reported having changed their diets over the past year. A majority of respondents said they had started to incorporate new ingredients to improve the taste of their food at home. PIFR’s ambitious task, if it can continue beyond a third season, will be to link improved nutrition outcomes in the Pacific to its viewership. It will be fascinating in the longer term to plot consumption of well-marketed imported ‘food’ such as instant noodles and processed meats, in relation to newly-popularised traditional ingredients such as locally-adapted roots, shoots and fruits.

A criticism we have heard about PIFR is that it is ‘just a television show’. Yet the world class production qualities of PIFR have aroused genuine interest among television network executives. Currently 20 networks across 12 countries, with a combined reach of 5 million viewers, have televised the program (official viewer figures from those Pacific TV networks are not yet available). We noticed a torrent of comments from the PIFR Facebook page’s 63,000 fans emanating from Papua New Guinea and Solomon Islands in particular. Experiencing genuine FOMO (fear of missing out), vocal supporters are demanding their countries be included in future PIFR seasons.

This reach and passion contrasts starkly with your average development communications outputs for much more expensive interventions. No doubt many of us have jostled, perhaps reluctantly, over which logo should be where on a banner, report or promotional video, only to see it slide rapidly into the aid media abyss. On countless occasions, I have spotted dusty gender, youth or conflict prevention training manuals propping up broken furniture in a Timor-Leste government office.

Television’s army of producers and marketers, who specialise in grabbing our attention, have much to reveal to the aid community. PIFR’s significant penetration to date into Pacific homes shows that audiences turn up when they are truly reflected in a program. For the Timor-Leste Food Lab’s emerging food leaders, PIFR exemplifies a more inspiring way to do development and one we should all take notice of.

The Timor-Leste Food Lab/Agora Food Studio received DFAT innovationXchange (iXc) funding from 2018 to 2019, as a partner of the LAUNCH Food program.