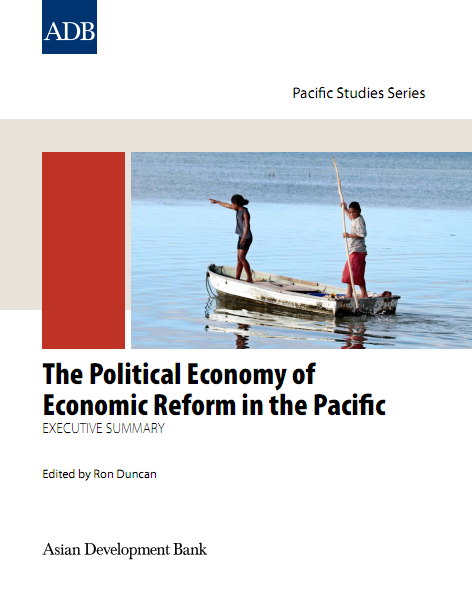 The political economy of economic reform in developing countries has become quite topical in development agencies in recent years, given the difficulties often experienced in achieving reforms. Not surprisingly, the bilateral and multilateral development agencies working in the Pacific have shown interest in the topic. A new Asian Development Bank publication, The Political Economy of Economic Reform in the Pacific [pdf], presents a set of studies on various aspects of the political economy of the Pacific island economies, including attempts at policy and institutional change.

The contributing researchers were asked to undertake a research topic, largely of their own choosing, that would shed light on different aspects of the political economy of these mostly small societies. The resulting studies, undertaken by researchers from several different disciplinary backgrounds—economics, political science, sociology, governance, etc.—cover many different dimensions of the political economy of the region. For example, there are reports on successful reforms (Charles Yala on the changes to land legislation in Papua New Guinea; Siope ‘Ofa on the opening of the mobile telephony market in Papua New Guinea; and Emele Duituturaga on the successful macro- and micro-economic economic reforms in Cook Islands and Samoa). Other studies of aspects of the political economy of reform include Margaret Cotton’s research on the attitudes of policymakers from across the region to different kinds of revenue policy reform; Giff Johnson and Ben Graham on Pacific leaders’ attitudes to economic reform as reported from their interviews with five former Presidents of the Federated States of Micronesia, Palau, and Republic of Marshall Islands. There are also studies of the political economy of various problem areas: Jon Fraenkel on “slush funds” in Melanesia, Matthew Allen on corruption in the logging industry in Solomon Islands, and Rod Nixon on the difficulties of reform in Timor Leste.

In my overview paper, I draw out various lessons from the studies. Perhaps one of the most important is what was learnt about the factors that are important in successfully implementing economic reforms. The studies confirm lessons from similar research in other parts of the world, such as the importance of a political “champion” of the reform, a supportive bureaucracy, and an effective communications strategy (including national summits) to engender public “ownership” of the changes. Additional lessons are: the “champion” need not be a politician—an organisation can be an effective champion, as in the telecommunications reform in PNG; an international treaty with “teeth” can be effective in locking-in reforms; local actors may perceive the changes as being much “larger” than the perception held by the development agency or their consultants, leading to difficulties in accepting the proposed changes; and it may be important to ensure that the change is in harmony with cultural practice.

Other useful lessons relate to thinking in development agencies towards aid to the Pacific island states. Jon Fraenkel sees politicians’ slush funds as being part of the “pervasive personalization of the management of state finance in Western Melanesia” and cautions aid agencies about the attitudes they should take towards government revenues, including aid, being used in this way. Roderick Duncan argues that aid agencies should turn the transparency traditionally associated with distribution in Pacific societies to their advantage by, among other things, institutionalising “big man” networks at the local level. Writing on the political struggles over the “rents” that have been distributed from the EU to Fiji through its sugar policy, Satish Chand shows how careful development agencies have to be about the impact that aid may have.

These are a set of studies worthy of considerable reflection by policy makers, development agencies, and researchers.

Ron Duncan is an Associate of the Development Policy Centre and Emeritus Professor at the Crawford School of Economics & Government, ANU. He was the editor of the ABD report ‘The Political Economy of Economic Reform in the Pacific“.

Ron Duncan is an Emeritus Professor at the Crawford School, ANU. His research is currently focused on the binding constraints to growth and ‘clientelist’ politics in the Pacific.