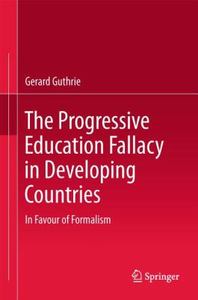 The fictional character, Atticus Finch, in To Kill a Mockingbird instructs his daughter that you never really understand a person until you climb inside their skin and walk around in it. This lesson is implicit in Guthrie’s book on education in developing countries.

Improving the quality of education is a development priority among donors. Australia has made a strong commitment to support education and further declared that: “Australia will base its investments in education on what works, is effective aid and achieves results”. Similarly, USAID’s education investments are to be “… grounded in the most current evidence based analysis of educational effectiveness and aimed at maximizing the impact and sustainability of development results.”

But where is the evidence for ‘what works’ in education interventions? The evidence commonly comes from the ‘grey literature’; from education project reports and special studies commissioned by donors as part of a development activity. This literature has important advantages of recency and specificity. However, unlike peer-reviewed, published research undertaken by universities and research organisations, many of these studies are done at very short notice, by teams of professionals unknown to one another and drawn from different countries, implemented within tight completion deadlines and subject to donor review before release. Such circumstances raise reasonable questions about the quality and independence of these studies.

What is less common is substantial, independent, research by experienced educationists. An outstanding exception is Gerard Guthrie’s book, The Progressive Education Fallacy in Developing Countries, In Favour of Formalism, (Springer, 2011). This book is primarily about Papua New Guinea (PNG) but also includes a chapter specifically on Chinese education in support of the author’s main thesis. The book focuses on the merits of formalism, also described as teacher-centred, traditional and didactic teaching, and the risks associated with the false premise that progressive, enquiry-based methods are necessary to promote intellectual enquiry skills among non-western school children. This premise he labels the “progressive education fallacy”.

Guthrie has a substantial academic and professional background from which to present his claims in this book. He was an academic and a prolific contributor to the research literature on education in PNG and subsequently became the Foundation Professor of Education at the University of Goroka, a Director in AusAID, and then a consultant to the World Bank.

Many practitioners will be alarmed (or perhaps have their views confirmed) to learn that their best endeavours to assist in the development of education may have been in vain. Guthrie argues that the curriculum reforms in PNG over the past 50 years have either failed, or lack evidence, to support any significant claims of successful outcomes. Furthermore, there is little evidence, he suggests, that the more recent education reforms there since the early 1990’s have succeeded in classroom change, despite the many inputs from the Australian aid program. In support of his conclusion, Guthrie presents a full chapter cataloguing failed local reforms, development programmes, and attempts at south-south transfer. He observes, rather sombrely, that: “Whether the lessons have been learned about the failure of progressivism in Papua New Guinea is highly dubious (p.145)”. Formalistic teaching persists in PNG because it is culturally appropriate. Furthermore, the high academic achievement often found in Confucian-tradition countries such as China, and evidence from elsewhere in Asia and Africa, shows that progressive education is unlikely to succeed in countries with pedagogies founded on different approaches to knowing and understanding.

Progressive education, which includes student-centred learning, active learning and learner-centred education, stems from European cultures based on a scientific epistemology that knowledge is there to be created and that student-centred progressive education should focus on helping students learn how to discover such knowledge. In contrast, the ‘revelatory cultures’ that prevail in many parts of the developing world focus on given truths that teachers are expected to pass on to their students. This revelatory function of teachers is wonderfully illustrated in The Pesantren Tradition; The Role of The Kyai in the Maintenance of Traditional Islam in Java by Zamakhsyari Dhofier (a former Australian Development Assistance Bureau scholar and doctoral student at ANU), published by the Program for Southeast Asian Studies at Arizona State University in 1999. The Javanese pesantren system is a large and complex religious and educational network and was the primary educational system in Java prior to 1900. It continues to play an important role in Indonesian education.

Guthrie provides evidence that classroom change in the developing world does not necessarily require progressive methods but can focus on upgrading more traditional and formal approaches to teaching and learning. This approach, he suggests, is likely to remain central to many school systems because it is compatible with their cultural practices. Improvements in primary and secondary schools will come more rapidly from working with existing teaching styles rather than trying to work against them or change them, he asserts. The way forward will come from approaches that build on what exists and not through constant borrowing from outside. Evidence suggests that incremental improvements to formalism are possible and can be successful when they accommodate local contexts.

National governments and donors often expend considerable energy to change classroom teaching on the assumption that student learning will improve. Yet, assumptions about teaching methods or culture are rarely discussed or debated let alone tested in developing countries. Although the field of school effectiveness and school improvement research does focus on student achievement, it has generally neglected classroom processes in their specific cultural contexts. This omission is one of my main disappointments with another new and important book by Bert Creemers and Leonidas Kyriakides, Improving Quality in Education: Dynamic Approaches to School Improvement, (Routledge, 2012). Context, in the Creemers and Kyriakides book, is defined in terms of national education policies, evaluation mechanisms, and stakeholder support and expectations. These matters are unquestionably important, but there is much more to a school’s context, especially local culture, than these factors suggest and as Guthrie clearly demonstrates. Having cited a Western text here, it is necessary to quote from Guthrie: “… so irrelevant to developing countries do I consider research on education in Western countries that this book contains almost no examples of it (p. xxvi).”

Despite the density and complexity of ideas that demand reader concentration, the book is very clearly written. It is devoid of the impenetrable jargon and convoluted prose that infects too much writing about education today and that, consequently, effectively locks out many educators particularly those from countries where English is not the first language. The Progressive Education Fallacy is a most interesting book and will become an important reference for those engaged in school education reform whether as practitioners, policy-makers or as researchers.

If reading this book does little more than lead us to pause, to ‘climb into the skin’ of others, reflect, and to discuss the cultural appropriateness of what we espouse with our development partners, it will have achieved its purpose. The book’s depth of discussion alerts us to the risks of adopting simplistic, common sense solutions to complex challenges. And, as Guthrie notes, perhaps the book will also provoke further research that may raise the possibility that progressive education is as much a fallacy in developed countries as in developing ones.

Robert Cannon is an Associate of the Development Policy Centre and is presently working as an evaluation specialist with the USAID funded Palestine Faculty Development Program and the new USAID PRIORITAS Project in Indonesian education.

Robert Cannon is a research associate with the Development Policy Centre. He has worked in educational development in university, technical and school education, most recently in Indonesia and Palestine.