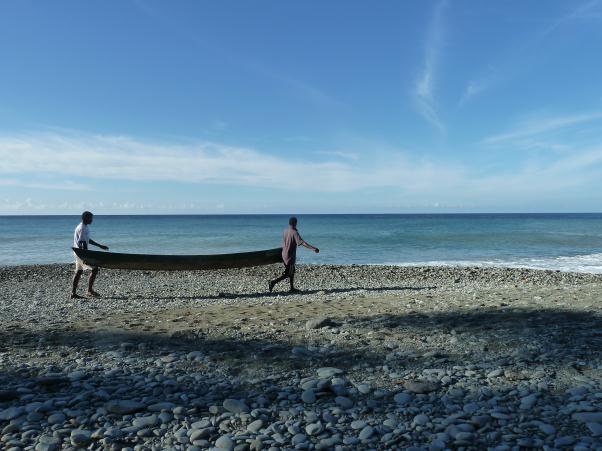 In November last year my wife and I travelled to the Weather Coast of Guadalcanal. The purpose of our trip was my PhD research on electoral politics in Solomon Islands but, as is always the case when doing fieldwork, it was hard not to notice the broader challenges facing the area.

The Weather Coast, despite the fact that it is little more than 50 kilometres from the aid and government centre of Honiara, is isolated and poor. Weather, poor infrastructure, and geography leave it virtually cut-off from the rest of the country at times, and it was badly affected during the Tensions. The people are friendly and, just like elsewhere in Solomons, trying their best to find ways of meeting their needs. But, owing to the isolation, this is not easy.

Paradoxically, being isolated from the rest of the country doesn’t mean that the Weather Coast is shut off from the forces of globalisation. In the Weather Coast’s case globalisation, and the global commodities boom, means mining prospectors. Almost everywhere we went we heard tales of geologists scouring the alluvial valleys and steep jungle covered mountainsides in search of extractable mineral resources. We also met quite a few community leaders who had been approached by mining companies seeking access the minerals on their land.

There’s nothing inherently wrong with mining. If land rights are clear, and if extraction is done in a manner that minimises environmental damage and downstream spill-over effects, and if locals are paid a fair price for the minerals taken from their land, then mining has the potential to bring at least a bit of development to a money-poor part of the world.

The trouble is that there are a lot of ‘ifs’ in that previous sentence. And experience from around the developing world (including parts of Melanesia) shows that, often as not, these ifs get bulldozed along with everything else in the race for mineral riches. Often the environmental damage is considerable. And often it is felt outside the immediate vicinity of the mining area, meaning that other communities who receive no benefits from the mining still feel its costs. In many cases land owners are paid much less than the minerals are worth. And, even when mining companies negotiate in good faith, overlapping land rights claims can mean that disputation and conflict arise nevertheless.

If these problems were to  arise on the Weather Coast it would be a tragedy, not least because the region is still recovering from the violent conflict of the Tensions years (indeed some of the underlying issues of that period remain). No one, least of all the region’s residents, wants to see conflict return to this area. And yet if minerals extraction from the Weather Coast is not managed well there is a risk that it might; or, that at the very least, relations within and between communities could be strained.

Avoiding such consequences is it seems to me an area where aid agencies could help. Specifically, they could help by providing communities with accurate information about the real wealth of the minerals they sit on top and providing them with assistance in legal negotiations with mining companies. Also, they might be able to facilitate negotiations between communities.

As far as I’m aware this isn’t happening though. When I asked an aid agency staffer if anything was being done in this area, they told me they were working with the Solomons Government with a view to having the government join the Extractive Industries Transparency Initiative.

This is good, but the trouble is, on the Weather Coast, as with much of Solomons, the central state has little or no reach. Information, service provision and legal enforcement tend to remain within the limits of urban areas meaning that the decision to join an international initiative may have an impact in Honiara, but it is quite likely that this won’t trickle down to rural areas.

The fact of the matter is that, for the time being, governance in most of Solomon Islands is a community affair. Decisions are made from within communities and enforced within communities. And, in the case of managing the adverse impact of extractive industries, for the time being this is the level where at least some of the international community’s attention needs to be directed.

Just to be clear: in writing this post I am not suggesting that all mining companies are inherently evil Some take corporate social responsibility seriously, but the trouble is that not all do. Likewise, I’m not saying that Solomon Islands communities are completely helpless in their interactions with extractive industries. However, when you place a village up against a large business in legal negotiations there are almost certainly going to be information and power imbalances. And, I’m not having a go at aid agencies: I know there are good reasons to focus on central government. The trouble is, in places such as Solomon Islands, if this focus becomes too exclusive, the local level, which is ultimately where the rubber hits the road in governing, tends to end up overlooked. In the case of extractive industries on the Weather Coast, this would seem to be a significant mistake.