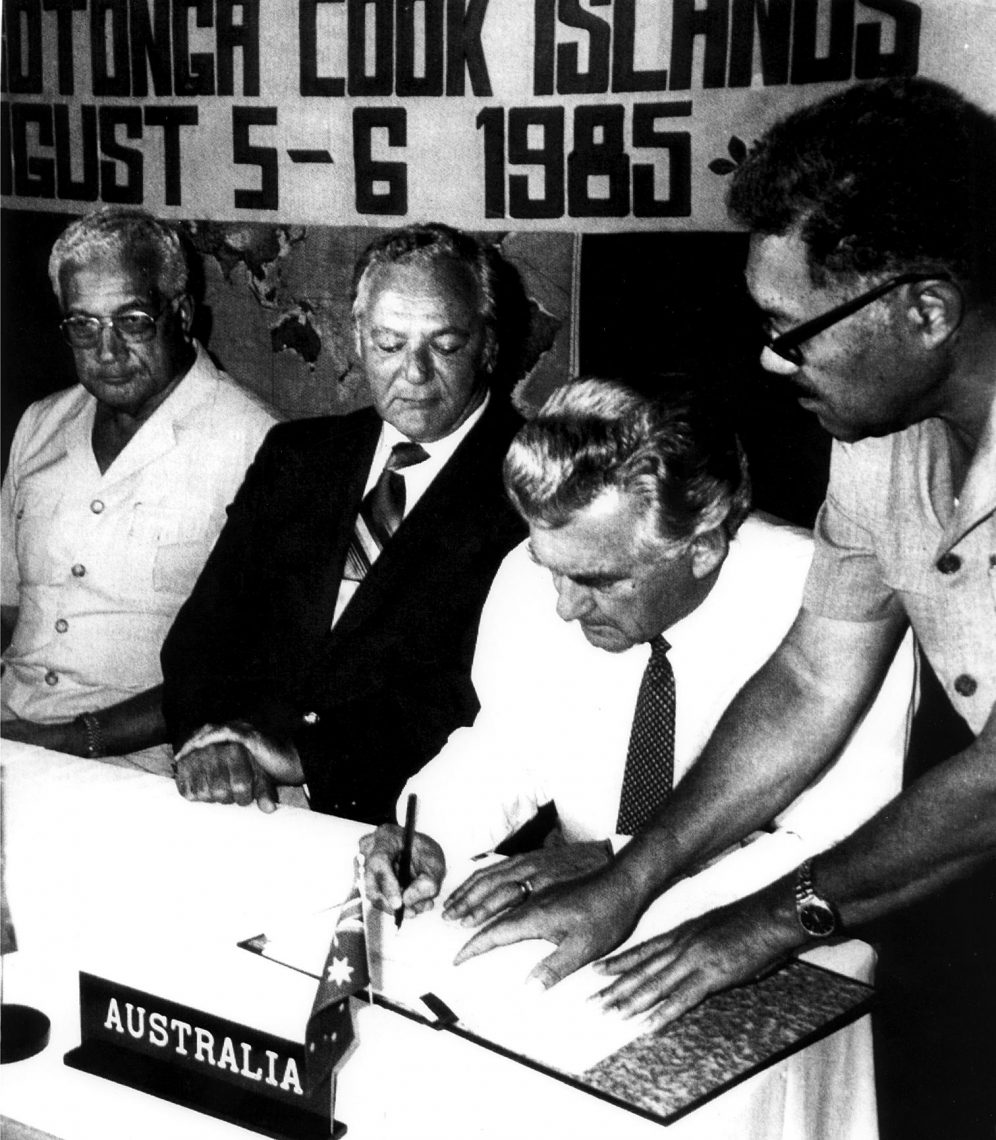 There is still hope for a global ban on nuclear weapons in our lifetime, and Pacific countries have long shown particular commitment to achieving this goal.

Two recent events have been encouraging.

In December 2020, the first ever meeting of state parties to the South Pacific Nuclear Free Zone (SPNFZ) Treaty was held to highlight the treaty 35 years after its adoption. It was a virtual meeting, organised by the Pacific Islands Forum Secretariat in response to the call ­at the 2019 Tuvalu Leaders meeting for the operationalisation of the provisions of the treaty.

The second event was the entry into force, today (22 January 2021), of the Treaty on the Prohibition of Nuclear Weapons (TPNW).­­­ This United Nations treaty includes a comprehensive set of global prohibitions on participating in any nuclear weapon activities, including development, testing, production, acquisition, possession, stockpiling, or use.

In the Pacific, the SPNFZ Treaty, also known as the Rarotonga Treaty, opened for signature on Hiroshima Day, 6 August 1985, in Cook Islands. There are 13 state parties: Australia, Cook Islands, Fiji, Kiribati, Nauru, New Zealand, Niue, Papua New Guinea, Samoa, Solomon Islands, Tonga, Tuvalu and Vanuatu. Ten of these states have also ratified the TPNW. Since the signing of the treaty, the three Micronesian states with a Compact of Free Association with the United States (Marshall Islands, Federated States of Micronesia and Palau), have remained outside of the Treaty zone, although they are current observers.

Parties to the SPNFZ Treaty commit never to develop nuclear weapons, or to test them in their territories. Protocols of the Treaty prohibit the testing, use, or threat of use, of any nuclear devices within the Treaty zone. Nuclear states with territories in the zone (France, Britain and US) have signed up to the protocols as required, but the US is yet to ratify any of them.

In what was seen as colonial racism against the indigenous populations of Australia and the Pacific, the United States, Britain and France conducted nuclear testing programs between 1946 and 1996 in the Australian desert and the atolls of the Pacific. The US conducted 67 atomic and hydrogen bomb tests at Bikini and Enewetak atolls in the Marshall Islands and the northern Pacific. Britain began testing nuclear weapons at the Monte Bello Islands, Maralinga and Emu Field in Australia from 1952 to 1957. Under ‘Operation Grapple’ the British government conducted atomic and hydrogen bomb tests at Kiritimati and Malden islands in the northern Pacific, involving Fijian, New Zealand and British naval personnel. Between 1966 and 1996, France conducted 193 atmospheric and underground tests at Moruroa and Fangataufa atolls in French Polynesia. While nuclear tests have ended in the Pacific, the health and environmental impacts live on, with some islands still unsafe for human habitation and ongoing health implications on others.

The nuclear tests triggered strong protests and resistance across the Pacific and in Australia and New Zealand, as disarmament and peace groups mobilised against the radioactive fallout across the inhabited islands. Resistance in the Pacific intensified in the 1970s, as churches, trade unions, academics, university students, women’s groups and customary leaders actively opposed the tests. The protests were diverse, including demonstrations at embassies, trade union bans and boycotts of French products.

As a student in Fiji in the mid-1970s, I was motivated to join protest groups like ATOM (Against Testing on Moruroa), led by Amelia Rokotuivuna, General Secretary of YWCA, who distributed ATOM t-shirts and inspired us with fiery speeches. Our principal then was Ms Taufa Vakatale, President of the YWCA, who became Cabinet Minister in the Rabuka government twenty years later, but lost her position when she chose to march against renewed French nuclear testing in 1995.

The formation of a Nuclear Free and Independent Pacific (NFIP) movement in the mid-70s led to the drafting of a People’s Charter under which grassroots, anti-nuclear and independence movements cooperated to press for a comprehensive nuclear-free zone and the recognition of indigenous people’s rights throughout the Pacific. The struggle against nuclear testing therefore became synonymous with the struggle for independence, self-determination and decolonisation. This was the regional context of resistance against nuclear testing in which the SPNFZ Treaty came into being.

The SPNFZ Treaty was finally negotiated in the 1980s after decades of campaigning, protests and resistance. When Greenpeace and other organisations prepared to send protest boats into the test zone, French intelligence agents responded by bombing and sinking the Rainbow Warrior in July 1985, as it was about to lead a flotilla of anti-nuclear testing vessels to Moruroa atoll. A month later in August 1985, Pacific leaders were ready to sign the treaty.

The SPNFZ Treaty has contributed to the elimination of nuclear weapons from the Pacific and beyond. Thirty-five years on, the need to review and strengthen the Treaty remains, including extending the zone to the northern Pacific. The election of President Joe Biden also presents an opportunity to renew calls for the US to ratify the Optional Protocols of the SPNFZ Treaty.

The COVID-19 pandemic has reminded us that no state is immune to the impact of trans-border catastrophes. A nuclear incident would pose grave risks to human beings and the environment alike. This threat remains as nine nuclear states – including China, the US, UK and France – continue to stockpile and possess thousands of nuclear weapons, in a state of high operational alert. A missile fired from North Korea against a US target in the Pacific would endanger the whole region. We in the Pacific must remain ever vigilant to ensure we remain a region of peace and never again allow our territories to become a testing playground for nuclear powers.

Ema Tagicakibau
Dr Ema Tagicakibau, a Fijian, served as Disarmament campaigner (2002-2008) with the Pacific Concerns Resource Centre (PCRC) in Suva, the secretariat of the Nuclear Free and Independent Pacific (NFIP) Movement. She moved to New Zealand after the military coup of 2006. She is a member of the Public Advisory Committee on Disarmament and Arms Control (PACDAC) in New Zealand.