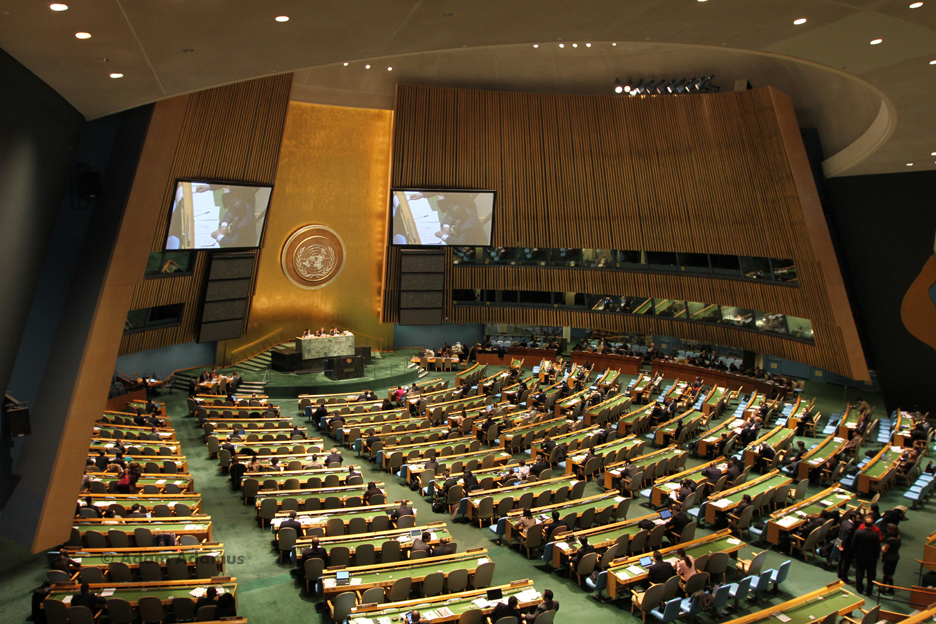 The sun is setting rapidly on the MDG era. Only months away, at the end of September, world leaders will assemble at the United Nations in New York to agree on a shiny new set of goals to guide global development efforts to 2030.

In some ways, the SDG era seems to have been on the horizon forever. For years, countless working groups, clusters and committees have been engaged in contemplations, negotiations and consultations with the objective of shaping the critical events of 2015. But for those not intimately involved in these machinations, or following them closely, only now are these efforts beginning to feel tangible. With the release of the latest draft [pdf] of the outcome document in early July and the Third International Conference on Financing for Development having just wrapped up, the rays of a new dawn are visible and things are beginning to warm up.

Yet crucial questions remain. Will the light of day reveal a truly different era of development? How likely is it that the SDGs, in the long run, will be successful? And by what criteria should this success be evaluated?

When contemplating such questions, it is difficult to avoid becoming entangled in a morass of detail. In one of my own forays into furthering my understanding of the SDG process last year, I came across the graphic below and froze. I gave up for a little while. I had wanted to get a view of the forest but was blinded by all the trees. (You can find a helpful primer on the SDGs here). 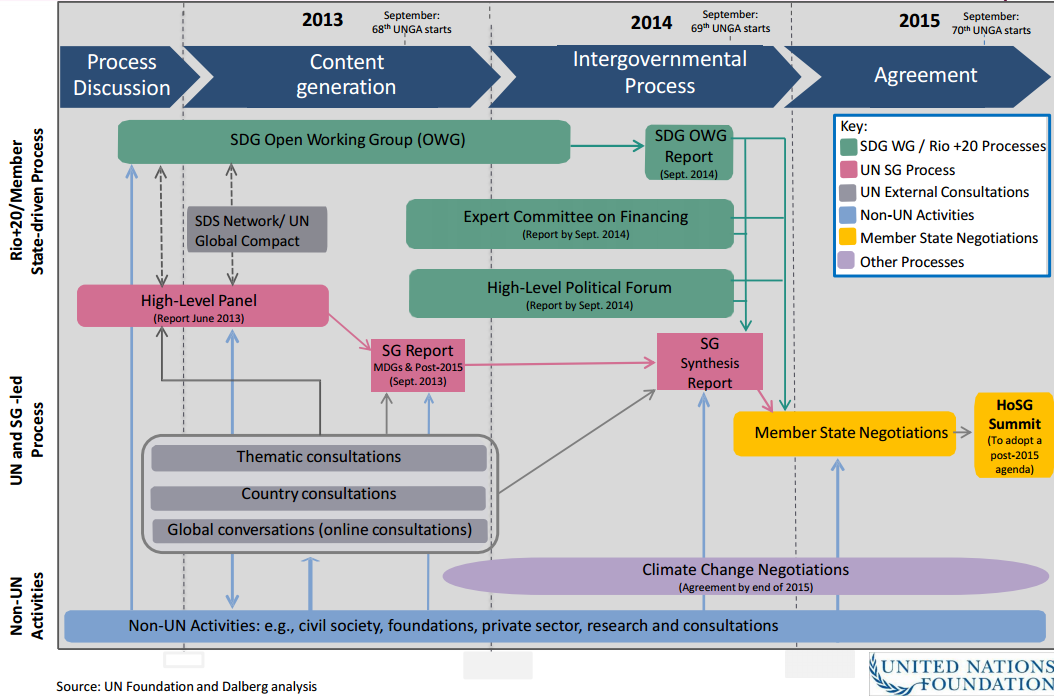 If you zoom out, it appears two camps are forming among those asking the types of questions above. When it comes to the SDGs, it seems, you are either on Team Bumblebee or Team Chimera.

The Bumblebees are the optimists. They believe the SDG process will ultimately deliver a set of goals that prove useful. This camp reckons the SDGs will get off the ground and fly, confounding the apparent laws of the universe. The SDGs will emerge as a coherent, functioning, productive creature.

The Chimeras are the pessimists. They believe the SDG process will ultimately deliver a set of goals that prove useless. This camp reckons the SDGs will be doomed at take-off by the weight of unrealisable ambition. The SDGs will emerge as an unviable, incongruous, mythical creature.

The Economist has situated itself clearly in the second camp. In a recent article, it concluded that “the proposed sustainable development goals would be worse than useless.” Railing against the proliferation of goals and targets, The Economist argues that “a set of 169 commandments means, in practice, no priorities at all.”  The ODI’s Philipp Krause is also a backer of Team Chimera. (In fact it was Krause, via this presentation at the 2014 CAPE conference, who was the genesis of the Chimera meme).

Homi Kharas and Amar Bhattacharya are cheerleaders for Team Bumblebee. They concede that the SDGs require fine-tuning, but emphasise that the enlarged agenda “gives voice to a range of different people.” The SDG process may be messy and require compromise to reach consensus, but it is worth it, argue Kharas and Bhattacharya, stressing that “a truly global effort to create a better life for all and a sustainable future for our planet is a cause to celebrate not denigrate.” The ODI’s Marcus Manuel, whose contributions on issues related to the SDG process can be found here, is another backer of Team Bumblebee. (It was his response to Krause’s presentation that inspired the Bumblebee meme).

In the lead up to the finalisation of the SDGs there will no doubt be much debate, both on this blog and elsewhere in the development community, both between Team Chimera and Team Bumblebee, and on the goals more generally. Is it overly simplistic to view the development of the SDGs as a competition between two teams? Probably. Is it fair to caricature the SDG process as being influenced by two opposing camps? Probably not. But is the Team Bumblebee versus Team Chimera framing a useful device for thinking about the SDGs as the pointy end of the process approaches? I think it helps. As this debate unfolds, it assists to frame some of the questions that remain unanswered in my mind.

As I’ve touched upon, much commentary and analysis on the SDGs is insider-focused and heavily technocratic. The Bumblebee–Chimera framing reinforces the pressing need for participants in the SDG process to continually revisit core questions and not get caught up in detail. Will the SDGs work? Will they achieve their purpose? Are the goals too ambitious?

It is also a reminder that, to be truly global in scope, the goals need to resonate deeply with the global populace, not just development insiders. There are difficult challenges ahead in translating the new agenda to a broad audience. How are the SDGs going to be ‘sold’ to the general public? Will they buy in? And will they instinctively consider the goals feasible? Will they assume the SDGs will fly?

The Bumblebee–Chimera framing also reinforces the fact that a contest is taking place. The crafting of the SDGs is a political process, requiring political decisions. Many voices are struggling to be heard. And as with any political process, choice is at its heart. Are the choices that are being made weighing down the Bumblebee to such an extent it has no chance of flying? Is collective over-ambition leading to a Chimera?

Another crucial question concerns the relevance and applicability of the SDGs for our region. While some of the issues discussed above are being debated abroad, discussions about the implications of the SDG process for our region are noticeably muted. Just how high are the stakes for the Pacific? Have the concerns of Pacific Small Island Developing States been adequately captured via the Open Working Group process? And what stake does, and should, Australia have in shaping the SDGs? It has been interesting to observe how Australia is directing its SDG-related diplomacy through the MIKTA (Mexico, Indonesia, South Korea, Turkey, Australia) grouping, as signalled by Minister for Foreign Affairs Julie Bishop in a recent speech. The government’s official response to the recently convened Third International Conference on Financing for Development took the form of a joint statement by MIKTA.

Any global deal must strike a difficult balance between aspiration and achievability. There certainly needs to be a bit of Bumblebee; we would all like to see something remarkable take flight. But equally there needs to be an awareness of, and active mitigation against, the risk that the SDG process could a spawn a Chimera.

Benjamin Day (Twitter: @benjaminsday) is a Research Associate at the Development Policy Centre and a PhD Candidate in the Coral Bell School of Asia Pacific Affairs at ANU.