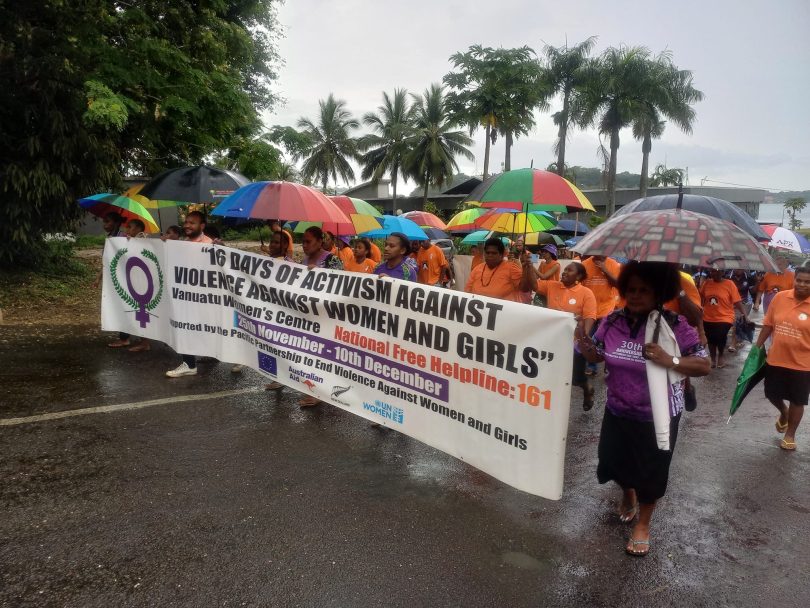 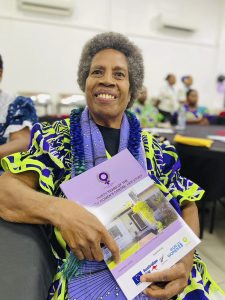 On 30 August 1992, three ni-Vanuatu women were on a plane back home to Port Vila, after attending a workshop in Suva with grassroots women from across the Pacific region. Three days later, the Vanuatu Women’s Centre (VWC) was born.

These three remarkable women were Merilyn Tahi, the Coordinator of VWC until February 2021, Elizabeth Mermer and Janet Saksak Boedovo. They returned from Fiji inspired by the First Pacific Regional Workshop on Women and Violence, organised by the Fiji Women’s Crisis Centre (FWCC). By November, VWC held its “curtain raiser”: Vanuatu’s first 16 Days of Activism against Gender-based Violence campaign.

VWC’s most recent publication, Thirty Years of the Vanuatu Women’s Centre: Her Story, documents the organisation’s journey through the memories and experiences of over 60 former and current staff and supporters. The book was edited by Merilyn Tahi and Juliet Hunt, and was recently launched at VWC’s 30th anniversary celebrations.

Merilyn Tahi tells her story in Chapter 1, documenting the guiding principles, challenges and achievements over the decades: “All the steps along the way have been informed by our work with survivors.” Many lessons about strategy emerge from her reflections and from the contributions in other chapters – about the most effective ways to prevent and respond to violence against women, how to adapt the learning from overseas and innovate to suit the Vanuatu context (such as through setting up rural committees against violence against women), and how to build a strong and sustainable organisation that ni-Vanuatu have shown they trust and value. For example, she shares how VWC addressed the challenge of navigating through custom and culture, and provides useful tips on what has guided her as an organisational leader. These tips and lessons are summarised in boxes and highlighted quotes for readers who want to go directly to this learning and experience.

The importance of autonomy and independence for ni-Vanuatu organisations are recurring themes, including local ownership of all aspects of programming. This makes the book a must-read for donor aid workers and policy makers who are following current debates about localisation, or who want to gain first-hand insights into why some of their efforts may be seen as neo-colonial in tone or impact. Merilyn gives a measured and honest account of how it feels when ownership is denied to those who are most impacted by donor efforts, and how to avoid this. She also describes how her involvement in the Vanuatu independence struggle influenced her thinking about how VWC was set up, and how it did its work: “I can make the link between the struggle of a survivor, and the need to have freedom from domestic violence, and the struggle for our nationhood, and the need for freedom from colonisation and control.”

In Chapter 1, Merilyn says “VWC is a change agent, we can see that, we can prove that”. In Chapters 2 to 5, we have direct evidence of how other VWC staff and supporters are all part of this change process. Each contributor tells their own story of how they are changing hearts, minds and behaviours, and each tells it in their own unique way – through poetry, drawings, or short narratives which range from a paragraph to a few pages. The contributions are a diverse mix of English, Bislama and French, Vanuatu’s three official national languages, with photos and quotes to accompany the contributions.

In Chapter 2, VWC’s co-founders and staff from the early days share memories of what it was like back then. We bear witness to their enormous courage as they stepped up to deal with resistance and opposition to their efforts to claim women’s human and legal rights. Chapter 3 provides readers with a range of different perspectives on the main challenges and achievements faced by VWC over the years. We hear from both long-serving and younger/newer VWC staff members, the son of one of VWC’s staff, and some of VWC’s most steadfast and hardworking male advocates. These men share how they were directly challenged by VWC on the discriminatory attitudes, norms and behaviours that underpin acts of gender-based violence and abuse; how this had an impact on them personally; and how they have worked with VWC to spread prevention messages and provide support to victims/survivors.

Chapter 4 takes us on some deeply personal journeys. We see how much having a service like VWC means to women living with violence. One of the strongest themes in this chapter is how the staff came to learn about their rights by being exposed to VWC’s messages about women’s rights – as community members and staff – and how this profoundly changed their lives. We learn how staff were mentored by the VWC leadership over the years to build their capacity, and to take on new roles that previously had been beyond their reach. The poetry and short narratives in this chapter provide a powerful set of examples of how we can live our commitments to human rights and the elimination of violence against women, and show us why VWC is such a strong ni-Vanuatu agency today.

Chapter 5 focuses on why Vanuatu still needs the VWC, with contributors’ thoughts often expressed through heartfelt poetry. Across the various chapters, the book also documents what helped VWC to sustain its work and maximise impact, including the support from local women and men, FWCC, the Pacific Network Against Violence Against Women, and VWC’s donors and other supporters.

When asked whether she and VWC have achieved the early vision that she had, Merilyn said: “As for eliminating violence against women and children, we are still very far from that goal, but we have got somewhere.”

The stories, reflections and poems in this book hold many lessons for people wanting to build viable civil society organisations, and for those committed to eliminating violence against women and children.

Download and read Thirty Years of the Vanuatu Women’s Centre: Her Story.

The Vanuatu Women’s Centre is currently funded by the Australian Government, the European Union, the New Zealand Government, UN Women and Oxfam Australia.

Tatavola Matas is Coordinator of the Vanuatu Women's Centre in Port Vila.

Merilyn Tahi was founding Coordinator of the Vanuatu Women's Centre (VWC) in Port Vila from 1992 to 2021, and is now Technical Advisor to the VWC.