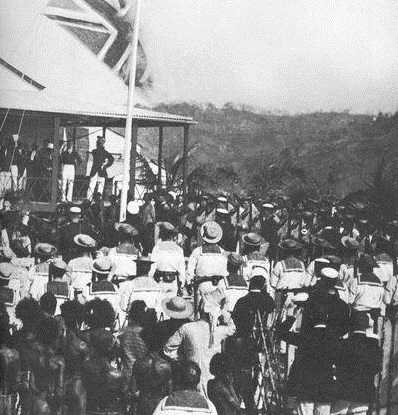 As the colonising power, Australia brought globalisation, war and then independence to PNG. By the same token, PNG and the broader Pacific stimulated federation, independence and a global role for Australia.

Neville Meaney writes that “geopolitics was the determining condition of Australian nationalism.” In April 1883, Queensland proclaimed the annexation of eastern New Guinea in the name of Queen Victoria. Britain refused to recognise the annexation and made a secret deal with Germany instead – infuriating the Australian colonies. The episode made it clear to Australians that Britain couldn’t be trusted with Australian security, and that the colonies needed an independent foreign policy.

Colonial Australia was born with a proprietorial attitude to the Pacific; that the region should be managed as “an Anglo-Saxon lake” to the exclusion of all other powers. From the 1860s Australians had been speaking of an Australian Monroe Doctrine in the Pacific – but unlike the American version which also relied on British naval power, Australian and British interests did not align. Britain frankly saw the Pacific as not lucrative or important enough to keep other powers out of; they were happy to cut deals with France, Germany and the US in the Pacific in order to get colonial concessions in what they saw as more important places, such as Egypt.

Australians were adamant that the only thing that would stop the British trading away their sense of security was if they took over the running of the Pacific. They insisted that the British accept Australia as the dominant voice in imperial dealings in the Pacific, and badgered the British to hand over the administration of Papua to Australia as one of the first acts of the federal Parliament.

For the next half century, they tried to get the British to hand over the administration of Solomon Islands and the British portion of New Hebrides to Australia, and even talked to the Dutch about ceding control of West New Guinea.

At the core of the Australian Monroe Doctrine was a deal: that Australia would assume responsibility for the stability, order and development of the Pacific as a condition for unwelcome interests staying out of the region. The unspoken assumption here was that instability and underdevelopment in the Pacific is the necessary and sufficient condition for the intrusion of unwelcome interests.

This is a strain of thinking embedded deep in Australia’s view of the world, and it continues to exert a powerful impact on Australian foreign policy in the Pacific.

At the end of the Second World War, Australia’s dreams came true. With Germany and Japan defeated, Britain and France preoccupied with internal rebuilding, and the United States rising to a global role, Australia and New Zealand were ceded responsibility for the Pacific.

The western alliance system divided up the world to keep it safe for freedom, and Australia at last had its Monroe Doctrine recognised as part of global allied strategy in the Cold War. So PNG and the Pacific became the platform for Australia’s global role – by assuming responsibility for a region, Australia gained a status and importance far out of proportion to its size or location. It embedded Australia in the western defence alliance – in effect Australia got American protection against Asia in return for assuming responsibility for looking after the Pacific.

As independence came to the Pacific in the 1960s and 1970s, Australia became the curator of the American-led global order in the region through promoting democracy and the rule of law; market-led economic development; and stability and resilience to transnational threats. Problems with any one or a combination of these would signify Australia’s failing in its responsibility for the region, as well as opening up avenues for malign influence in the region.

The other major driver of Australian policy towards PNG in this period was its perception of Asian power dynamics. As fears of Asia rose, the intensity of Australia’s engagement with PNG rose. Significantly, PNG’s independence coincides neatly with what I think of as the “Asian settlement” – the acceptance of American primacy in Asia by China in return for the space to develop economically; the exclusion of the Soviet Union from Asian power dynamics; and the shelving of rivalries in Southeast Asia to focus on individual and collective development. As Owen Harries argued 40 years ago, Australia was comfortable in rushing PNG towards independence because its fears of hostile Asian powers had receded.

This was the strategic context that governed the first decade of Australia’s relations with an independent PNG.

A policy of direct budget support emerged from a combination of guilt at not having done more to prepare PNG for independence, and a benign assumption that stability and development would occur naturally.

The eruption of violence on Bougainville shocked Australia out of these benign assumptions of unidirectional development. The behaviour of the PNGDF on Bougainville shook confidence in Canberra about the ability of Australian mentoring to shape institutions in PNG, while revealing the limits on Australia’s post-colonial influence.

Almost a decade later, the Sandline crisis raised fears that PNG was slipping towards a ‘coup culture’ like Fiji. Events in PNG, Fiji and Vanuatu began to call into question Australia’s capacity to exercise responsibility for the region. The threat of domestic instability in PNG and other Pacific countries jeopardised some of Australia’s foundational foreign policy principles, including the ability to curate western liberal values in its region of responsibility, and directly challenged the narrative that liberal institutions deliver economic development. They also raised the prospect that Pacific governments were willing to call on unwelcome outside interests to restore stability, thereby threatening Australia’s global reputation.

Canberra’s strong response to the Sandline crisis was soon followed up by its deeply risky intervention in East Timor. I think we will look back on the period between Sandline and the Enhanced Cooperation Program (ECP) in 2005 as a distinct, interventionist period in Australian foreign policy driven by three factors. First, a growing sense that arms-length attempts at indirect influence were inadequate for the increasingly complex and unpredictable dynamics of the Pacific. Second, a growing confidence in the effectiveness of stabilising interventions and a realisation that these could enhance rather than erode Australia’s reputation. And finally, an increasing comfort with the thought that Australia could find external solutions to its domestic problems by cutting deals with its Pacific neighbours.

While the 2005 ruling that the ECP was unconstitutional and the 2006 Honiara riots, not to mention the worsening violence in Iraq and Afghanistan, punctured Australia’s confidence in interventions, nothing shredded Australia’s legitimacy more than the so-called ‘Pacific Solution’.

The rhetoric of altruism and partnership was quickly deflated by the realities of transactional deals. This was nothing but pure Australian self-interest.

Here in PNG, the Manus Island detention centre has become a weeping sore at the heart of the bilateral relationship. For PNG, the deterrent rationale for detaining asylum seekers on its territory acts as a constant recycler of negative perceptions about this country, while for Australia Manus has become a source of dependence on another country that it has rarely had historically.

Meanwhile, the Asian settlement is looking increasingly ragged, as China more and more insistently contests American primacy in Asia and builds influence in Southeast Asia. Decades of encouraging private sector-led growth in the Pacific means that the days of the Australian Monroe Doctrine are ending fast, as Pacific nations engage with rising Asian powers.

Few Australians realise how foundational Australia’s relationship with PNG and the Pacific are to its global interests, and so are unaware how quickly and how profoundly things are changing in what we take to be our region of special responsibility. While here on the ground the PNG-Australia relationship is broad and intimate, its strategic context is changing. We are both part of an island chain that separates the Pacific Ocean from the Indian Ocean, at the fulcrum of a strategic realm increasingly referred to as the Indo-Pacific.

Australia and PNG will inevitably become subject to the rivalries among Asia’s rising powers and the United States as they try to reshape the regional order in their interests. This next phase of our relationship is upon us, and I worry that we have not yet transitioned from old modes of thinking about it. That’s why bilateral exchanges of ideas, such as the PNG Update, are so important.

Geography, history and deep social linkages bring our two countries together; we must ensure that our conversations and cooperation across the Torres Strait are constant and evolving in the challenging contexts that lie ahead.

Professor Michael Wesley is Professor of International Affairs and Dean of the ANU College of Asia and the Pacific. This post is an edited version of his remarks given at the 2017 PNG Update conference dinner.

Michael Wesley is Professor of International Affairs and Dean of the College of Asia and the Pacific at the Australian National University. He has published on Australian foreign policy, Asia’s international relations and strategic affairs, and the Politics of state-building interventions. His book, There Goes the Neighbourhood: Australia and the Rise of Asia (2011), was awarded the John Button Prize for the best writing on Australian politics and public policy.