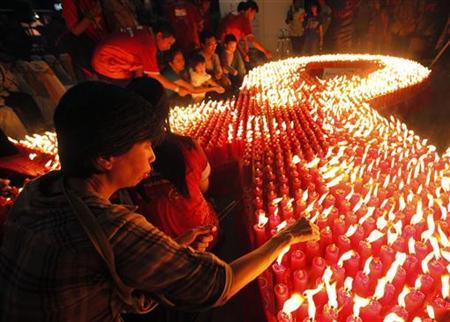 This World AIDS Day, the people of Asia and the Pacific, who are living with, and working to prevent HIV, ask that the Australian Government make clear its intention for HIV funding, and stress the importance of Australia’s role as an advocate for human rights in a region where legal impunities still restrict key groups – men who have sex with men and transgender people – from accessing the information and services needed to stop this epidemic.

New UN statistics [pdf], released on November 19, at the 11th International Congress on AIDS in Asia and the Pacific, show that HIV is growing fastest among men who have sex with men.

It is estimated that by 2020 up to 50% of new HIV infections will occur within men who have sex with men (MSM) communities. National HIV prevalence in China, Indonesia, Malaysia, Myanmar, Thai and Vietnam is estimated to be more than 5% with particularly high prevalence in large urban centres such as Bangkok, Hanoi and Jakarta (between 15%-25%). It is possible to make HIV a thing of the past, but to do that, we must focus our attention on working with these groups.

This is not new information. An assessment  from 2012, ‘HIV in Asia – Transforming the agenda for 2012 and beyond: Report of a joint strategic assessment in ten countries’, undertaken by AusAID, UNAIDS, USAID, WHO, UNFPA, UNODC, UNDP, World Bank and ADB, clearly stated then that the “incidence among men who have sex with men is rapidly becoming the largest single driver of the epidemic in the region…and while transgender men and women are recognised as highly vulnerable and stigmatised, little is known or done for them”. We have the information we need, we know where and how to direct funds and services, now we must act upon the evidence.

This can pose challenges in Asia and the Pacific. 18 out of 38 countries in Asia and the Pacific still criminalise same-sex acts between consenting adult males. It cannot be underestimated how this contributes to the stigma that prevents people from accessing the life-saving care and treatment they need and deserve as citizens. In these countries, community organisations that are trying to provide vital sexual health information to MSM, must operate through informal peer-to-peer networks to reach people often without the support of the government. This approach is limited in its scope to address the problem on a large scale. Australia has an important political role to play, to advocate for human rights of all to be able to access the highest level of available healthcare.

Australia’s role as one of the largest donor of funds for HIV in the region becomes particularly pertinent in this kind of environment. In lieu of government recognition, community-based organisations working at the frontline of this epidemic, need external support to maintain their service-provision and policy engagement to maintain the fight.

Community-based organisations are at a critical juncture in their efforts to address HIV in this region. In low-income countries, 95% of HIV funding is provided through external multilaterals, like the Global Fund – of which Australia is the largest contributor in this region. It is recognised that foreign aid cannot be seen as a long-term, sustainable funding model for community-based HIV work, but for Australia to scale-back its funding at this stage would lead to a major regression in HIV figures, that would take decades to overcome and require even greater investments of funds in the future.

In the past, large amounts of HIV funds have been misdirected to generalised prevention and programming campaigns with low-risk groups.  Instead, Australia must take a targeted approach, and invest in community organisations working directly with at-risk groups. We know that at-risk communities are more likely to access information and treatment from these organisations; this means more testing and faster access to anti-retroviral treatments to lower the risk of onward transmission. Community-based organisations, grown out of and working directly with local MSM and transgender communities, know their epidemic and know what works to stop it.

What they need now is: support to build their programming and organizational skills; allies in the political halls of power to push for a supportive legal environment; and long-term strategic planning at the upper tiers, to ensure funding gaps do not emerge as the transition for HIV funding moves from donors to national governments.

Midnight Poonkasetwattana is the Executive Director of the Asia Pacific Coalition on Male Sexual Health.

Midnight Poonkasetwattana is the Executive Director of the Asia Pacific Coalition on Male Sexual Health.