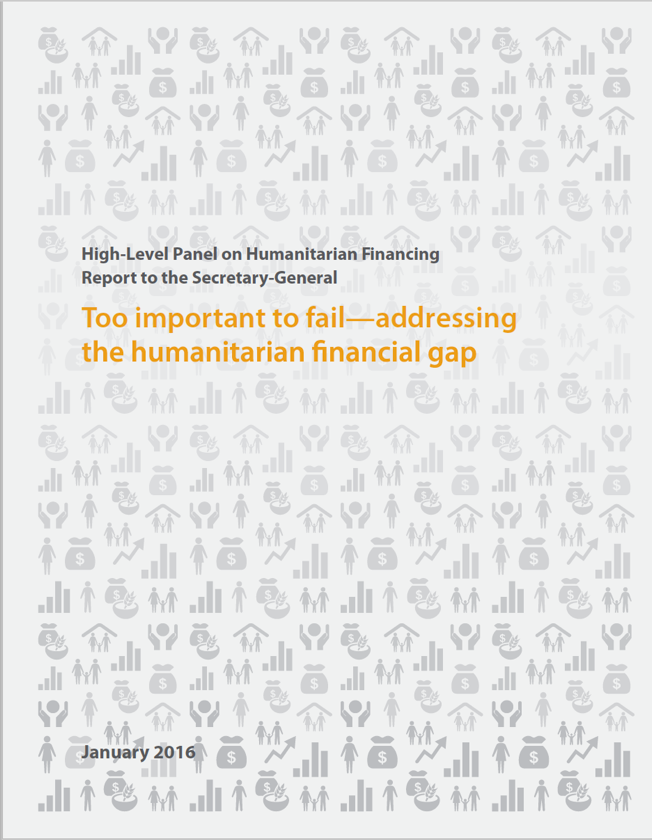 The report [pdf] of the Secretary-General’s High-Level Panel on Humanitarian Financing, Too important to fail—addressing the humanitarian financial gap, was done in a hurry, relative to the complexity of the task, and it shows.

The panel’s findings and recommendations, delivered only six months after the body was formed, are general and lack policy bite. Some are glib (‘engage the private sector to commit resources for in-kind response’). Some are poorly informed (‘rules used by international organisations to track assistance fall short in recognising the scale and value of inputs provided by non-DAC nations’). Some are tired (‘develop international media platforms for more systematic and predictable individual giving’). Some are half-baked and faddish (‘green or social impact bonds’ to finance ‘recurrent and protracted humanitarian costs’). The report’s centrepiece is a ‘Grand Bargain’ which, like most bargains, is not well made—on which more below.

There’s nothing to be gained by carping about the deficiencies of yet another UN high-level panel product. There is some value, though, in treating this panel’s report as a scaffold upon which at least a few concrete public policy ideas might take shape at some point before the May 2016 World Humanitarian Summit in Istanbul.

The panel perceived three challenges: reducing the demand for humanitarian financing, increasing the supply of it, and improving its efficiency. Under these wide-open headings it collected every idea that seemed remotely relevant, without adding to the stock of them or further developing any. Glaringly, there is no single recommendation that speaks to the enormous funding shortfall that exists and each year increases. As was observed by the former head of the UN Refugee Agency (now a declared candidate for the role of UN Secretary-General), António Guterres:

If you look at the humanitarian budget all over the world, it is somewhere between $20 billion and $30 billion. I don’t know any bailout of even a medium-sized bank that did not cost more than that. Not to spend more on humanitarian aid is a bad strategy, not to say a suicidal one.

A better approach, albeit a harder one given the inevitable diversity of views within a large panel, would have been to develop a shortlist of practical problems that need to be solved and, at least in principle, can be solved. True, some such problems are efficiency-related but the main problems, in my view, relate to the architecture of humanitarian financing and the structure of incentives for public and private action.

The present post is an attempt to concentrate attention on the first of these two problems and sketch a public policy response; a further post will attempt the same in connection with the second problem.

The most general problem of all, and arguably the culprit behind the stubborn global financing gap, is the strikingly centreless nature of global humanitarian policy and resource mobilisation. The UN panel’s report does in some sense look to the centre when it calls for a grand bargain (elements shown below) to be reached in the first instance by the handful of the major players—the ‘few giants’—among donors and implementing agencies. However, this bargain would merely exchange more money and less strings for more efficiency and more transparency about overheads and destinations. That is a worthy but plaintive call, not backed by any sense of how the contract would be formalised and enforced. The suggestion is not, as might be assumed, that there should be some kind of a global humanitarian action treaty. The panel has made nothing more than a plea for an attitude, aimed mainly at donors. 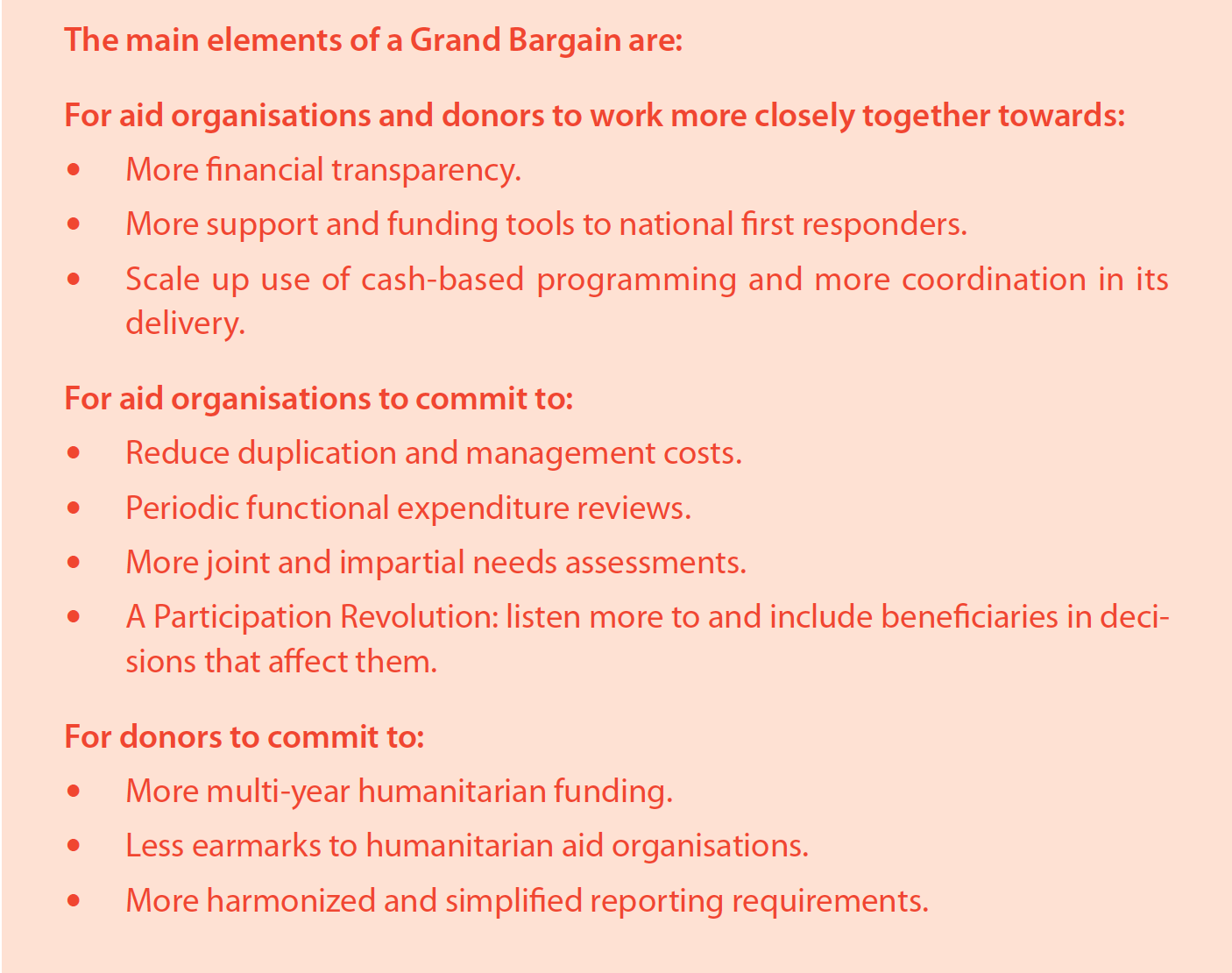 Something rather less paltry and process-oriented could have been proposed, short of a treaty, but with an eye to the world of the climate change negotiations.

What might that be? The world of humanitarian action has no standing intergovernmental expert panel on humanitarian crises. There is no pre-eminent, high-level political forum in which problems and responses are reviewed. (The UN Office for the Coordination of Humanitarian Affairs, OCHA, being only an office within the UN secretariat, has a Donor Support Group but nothing resembling an Executive Board.) There is no core financial mechanism with strategic investment capacity, independent of implementing agencies. All these things exist in the world of climate change action.

It is true that humanitarian assistance, by contrast with climate change mitigation, is not strictly speaking a global public good. It does not deliver global benefits, or require collective action, to the same extent as climate change mitigation. However, it certainly does deliver substantial global benefits and does require a high level of at least regional cooperation. These facts, together with the moral case for the provision of sufficient, effective assistance, warrant our regarding humanitarian assistance as something tantamount to a global public good as a matter of public policy. There is, therefore, a strong case for mirroring in the humanitarian arena the technical, consultative and financing structures put in place to deal with the mitigation and impacts of climate change.

Above all, there is an obvious need for a core humanitarian financing mechanism that provides long-term and reserve funding capacity for humanitarian crises. At present, we have in the multilateral system only the UN’s Central Emergency Response Fund (CERF) and the Crisis Response Window (CRW) of the World Bank’s concessional financing arm (IDA). Together these mechanisms allocated about $1.4 billion last year, equivalent to 7% of the OCHA’s 2016 global appeal (figure below) or less than 6% of last year’s total humanitarian expenditure as estimated by the UN panel. Other humanitarian agencies limp along from year to year on mostly ad hoc contributions. 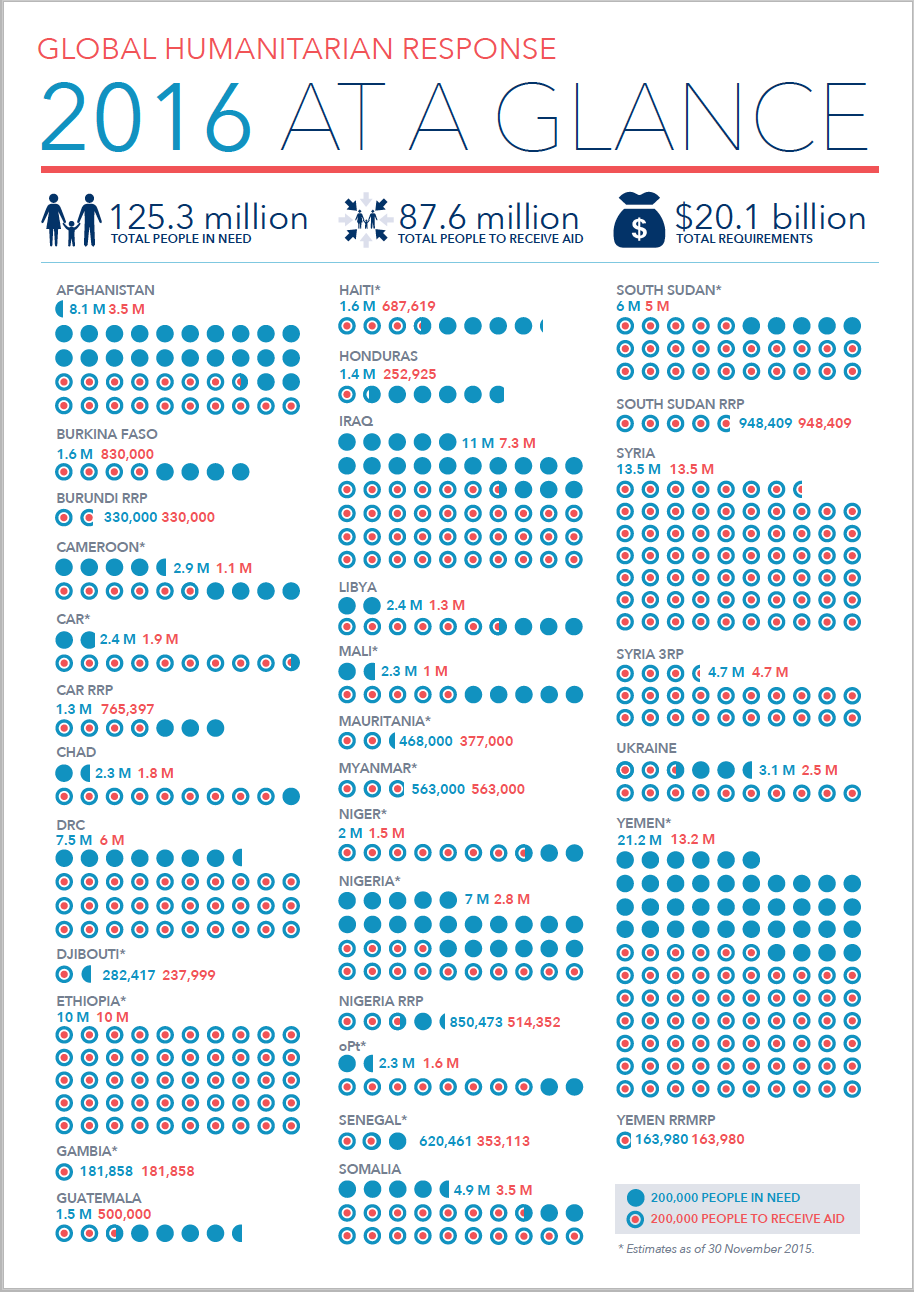 It would be so much better, surely, if there were a central fund, independent of implementing agencies and overseen by a dedicated governing body, with the capacity to direct funds through any channel and a CERF-like mandate to pre-finance rapid responses to emerging situations as well as ongoing responses to neglected ones. It must be considered surprising that the world is equipped with global funds for major infectious diseases, for climate change and even for education, but not for humanitarian response. A global humanitarian financing mechanism would preferably absorb both the CRW (which the UN panel wants to triple) and the CERF, and institute regular replenishment rounds of the kind that currently benefit other global funds and, via IDA, the existing CRW. OCHA would likely supply many of the personnel required for the fund’s secretariat, but the fund should not be a creature of the UN, nor be involved in operational coordination. It should be an investor.

The global fund’s governance, technical advisory and resource mobilisation arrangements could be geared to focus global attention on the big picture on a regular basis, in much the same way that the Intergovernmental Panel on Climate Change and the annual climate change conferences, with ministerial segments, focus attention on climate change.

The fund’s mandate could be heavily weighted toward protracted crises in order to correct for the present misallocation of resources in favour of emerging crises and in particular acts of God.

In addition, the fund’s grant resources could to a substantial degree be blended with loan financing from various international financial institutions, as happens in the case of financing for climate change mitigation and other environmental investments with positive international spillovers. This would obviate the need to fiddle with IDA’s eligibility criteria in order to be able to extend support to hard-pressed middle-income countries like Jordan, Lebanon, Turkey and Iraq (the panel recommends such fiddling: ‘follow the people in need, not the countries’).

Giving the global humanitarian fund a cofinancing mandate would also address the problem that humanitarian financing is heavily focused on the prevention of immediate suffering and contagion and not sufficiently invested in meeting the medium- to long-term needs of displaced communities, such as support for education, small enterprise development, community governance and complex infrastructure.

Host countries benefiting from blended concessional packages or grants could claim credit for their humanitarian contribution if they wished, in proportion to their outlays net of international support. (This would be better than both claiming the credit and getting concessional financing, as is oddly suggested by the panel.)

The resources mobilised by such a global mechanism would for the most part complement those raised through specific appeals. It would hardly be prudent to eschew fundraising on the back of individual crises and hope to deal with everything through pre-committed funds (the panel complains that ‘the current business model of the global humanitarian system is built almost entirely upon retrospective finance’). If certain forms of crisis seize the imagination and the purse strings of the general public and of politicians, then by all means let fundraisers make hay.

However, bearing in mind that the funds so raised are sometimes excess to requirements, an option that might be considered is to levy both public and official contributions to favoured emergencies in such a way that some proportion of the funding is set aside for protracted crises, and ideally placed in the global humanitarian fund. A small-print, opt-out approach might enable such a levy to operate effectively, and the same approach also be used to ensure that unspent funds still around after, say, six months are also reallocated to protracted crises.

A companion post will discuss some options for creating more effective incentives for public and private humanitarian action.

Robin Davies is the Associate Director of the Development Policy Centre. This blog is part of a series.