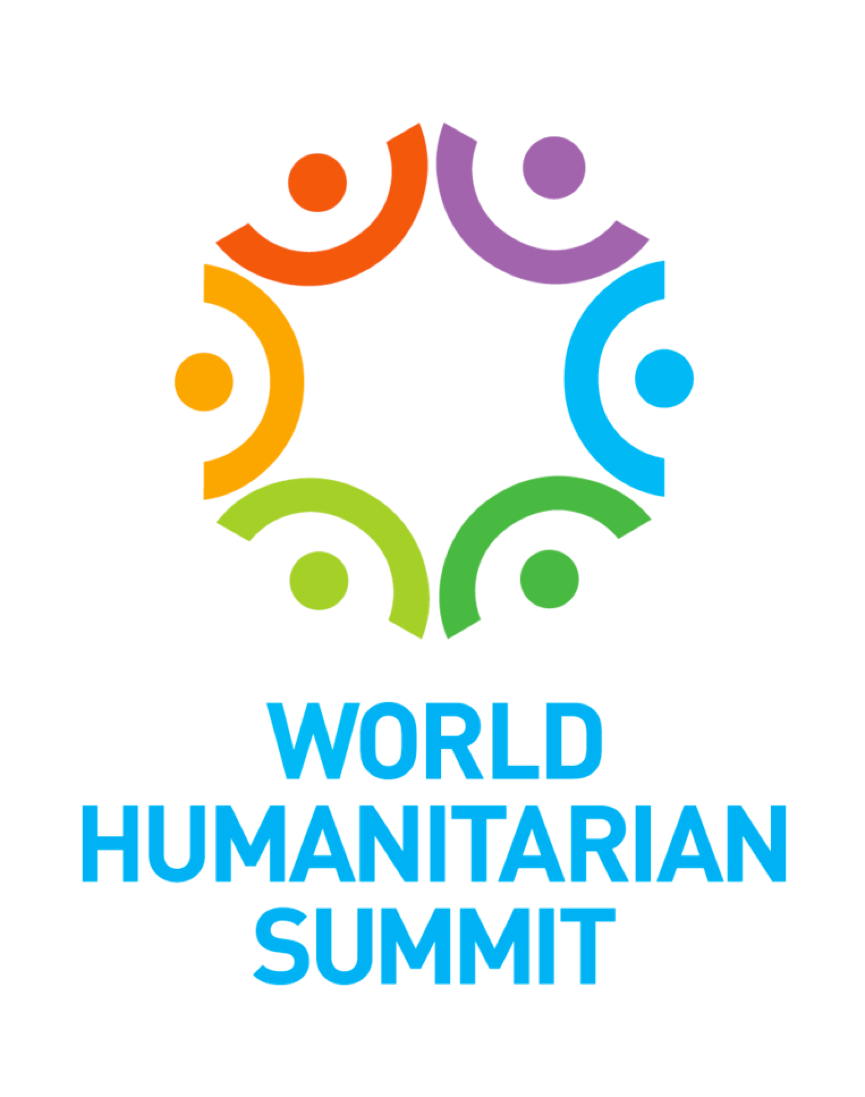 In reaction to the disappointing report [pdf] of the Secretary-General’s High-Level Panel on Humanitarian Financing, Too important to fail—addressing the humanitarian financial gap—the first part of this post proposed something that, surprisingly, was not considered by the UN panel: the establishment of a strategic financing mechanism for humanitarian assistance.

This companion post addresses a second and equally striking omission of the UN panel’s report: the absence of any proposals to change the structure of developed countries’ regulatory and legislative incentives bearing on humanitarian action. This is another area in which meaningful changes in public policy could, in principle, emerge from the World Humanitarian Summit (WHS) this May.

Two quite different problems could be tackled here. Both arise from perverse incentives grounded in multilateral or national rule-making. The first is that the current OECD rules governing the eligibility of public expenditure to be reported as Official Development Assistance (ODA) create incentives to charge immediate asylum-seeker costs to aid budgets, at a growing cost to other uses of aid and without promoting refugee acceptance. The second problem is that the current rules governing the eligibility of private donations for income tax deductibility typically create incentives for NGO proliferation and wasteful donor churn.

Rules determining the eligibility of national spending to be reported as ODA can have substantial incentive effects. Though the death of ODA is regularly predicted, or even called for (the UN panel, getting well ahead of itself, thinks the world needs a ‘post-ODA plan’), ODA reached its highest level ever in 2014 and represents a big honey pot for finance ministries wanting partially to offset domestic expenditure by immigration and border protection authorities.

OECD Development Assistance Committee rules relating to the treatment of refugee and asylum-seeker costs borne by host countries are well known to be a complete mess. At present, donors can get ODA credit for some such costs but the relevant rules are vague and interpreted variously. The trend is for much greater attribution of these costs to aid budgets, and this is already showing in retrospective ODA reporting (see the chart below, which compares expenditures in each of the last two years with those in 2005). Such costs have grown from US$2.3 billion to US$6.7 billion over the last decade (constant 2013 prices) and now easily exceed bilateral ODA to East Asia and the Pacific combined (US$5.8 billion net in 2014). While the overall cost stood at 6.2% of bilateral ODA in 2014, a few donors are reporting large proportions of their bilateral aid in this category. Most notably, Italy and Greece reported 58% and 46%, respectively, in 2014. Sweden and the Netherlands reported 25% and 22%, respectively. 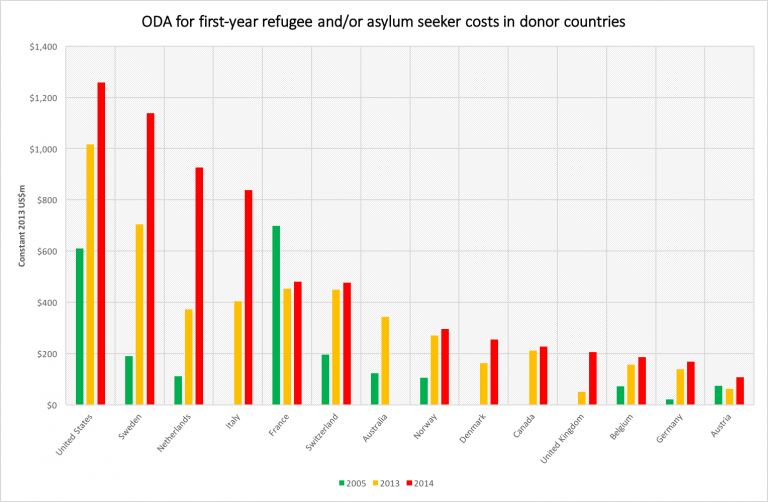 A large proportion—probably most, though it is impossible to be sure—of the costs claimed relate to asylum-seekers rather than accepted refugees, even though the DAC’s statistical reporting directives [pdf] refer only to refugees, not asylum-seekers. Some people argue that ‘real aid’ would not finance domestic costs of any kind, except perhaps those associated directly with aid administration. Here is a space-saving bald assertion: there is nothing inherently wrong with conceiving costs associated with refugee acceptance as a global humanitarian contribution. Indeed, ODA reporting guidance would preferably create clear incentives for refugee acceptance and the rapid determination of asylum claims. This could be achieved by conferring limited ODA eligibility on costs associated with refugees granted permanent residency in the host country, after the point of acceptance, but not costs associated with the upkeep of asylum-seekers in the community awaiting determination. (Costs associated with administrative detention, at least in institutions, are already ineligible to be reported as ODA.)

In addition, for the sake of simplicity, ODA cost containment and transparency, consideration could be given to negotiating a fixed global ODA ‘price’ per refugee accepted, perhaps with the costs distributed over 3-5 years to reduce volatility. This would, appropriately, reduce the incentive for high-cost hosts to accept refugees at the expense of other ODA expenditure. Non-OECD countries accepting refugees, which would tend to be lower-cost hosts, would have their costs calculated on the same basis for the purpose of tracking and comparing their overall dollar-value humanitarian contributions.

Rules determining the eligibility of private spending to be treated as income-tax-deductible can also have substantial incentive effects. The UN panel, while spending rather too many words on international taxation proposals, says nothing at all about this. Incentives for private giving, provided mainly through tax systems, are at least as much of a mess as are DAC rules about onshore refugee and asylum-seeker costs.

The blanket availability of tax deductibility for donations to organisations that manage to meet quite basic criteria of humanitarian motivation has undoubtedly contributed to a proliferation of national aid and development NGOs, and a consequent dispersion of the funds raised by those organisations for emergency response and humanitarian purposes. See, for example, the early 2011 Haiti NGO aid map below. By most estimates, at least several hundreds of international NGOs entered the country, which was already known as the ‘Republic of NGOs’, after the 2010 earthquake. A similar number of international NGOs had earlier appeared in the Indonesian province of Aceh after the 2004 Indian Ocean tsunami. Australia, for one, probably has more than 150 tax-advantaged international development NGOs, of whom a substantial proportion get involved in emergencies. The precise number, by the way, is very hard to come by, in part because some small NGOs obtain deductibility via a handy umbrella organisation. You can get a rough idea by searching relevant parts of the Australian Business Register, and you can witness the Australian Charities and Not-for-profits Commission struggling with the numbers here. 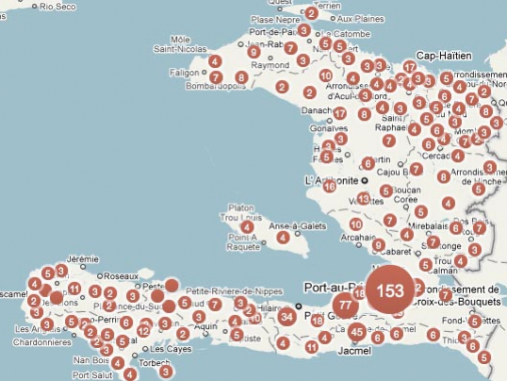 This proliferation is a longstanding problem, which could be addressed by smarter tax or matching incentives. Donor governments inclined to match public donations for a given situation sometimes match only donations to combined NGO appeals, which is a small start. A more aggressive approach would be to match or allow income tax deductibility only for humanitarian donations to organisations that have well-defined operational roles in consolidated appeals (this might be too hard to implement) or else to organisations that meet a certain size threshold or else pass funds to UN funds and programs or to the Red Cross and Red Crescent movement (easier to implement). It should be noted that arrangements of the latter kind are growing in importance: UN organisations are increasingly benefiting from the private fundraising efforts of national NGO affiliates. (Disclosure: The author is on the board of one such affiliate.) Individuals would be free to make humanitarian donations to other organisations, but the tax system would not encourage them to do so.

One particularly unfortunate result of NGO proliferation, not confined to the humanitarian field, is that there are substantial deadweight losses associated with fundraising competition. Spending a dollar to raise a few is fine, but spending a dollar to shift a a donor’s allegiance from one NGO to another is about as good as burning it. Again, it would be possible to use tax systems to create incentives for stability in support for NGOs. For example, a person might have to donate at least $250 per annum per NGO (i.e. an average monthly gift somewhere above $20) in order to claim an income tax deduction. This would tend to favour pledge donations provided on a regular, long-term basis, and help to nudge NGOs toward the cultivation of their existing donor bases and the acquisition of first-time donors. Combined with the incentive described in the previous paragraph, it would also ensure that smaller NGOs working on long-term development assistance projects, rather than providing humanitarian assistance, could maintain a deductible income stream—without the need to decide what counts as a ‘humanitarian’ donation.

There is an OECD angle here too. At present, much to the frustration of treasuries and finance ministries in donor countries, revenue foregone as a result of the provision of tax concessions for donations to development organisations cannot be reported as ODA. This is on the basis that it constitutes a transfer within the donor country, from the government to individuals, rather than an international flow. However, as in the case of costs associated with refugee acceptance, there is no compelling reason to cling so tightly to the OECD’s original notion of ODA as a flow from the official sector of a donor country to a developing country government or a multilateral organisation. Rather, the question should be whether an item of official expenditure can further a development or humanitarian aim. And the provision of smart tax concessions, like the provision of places for refugees, can certainly do that.

To sum up the present and previous posts, the WHS could do some practical things without getting bogged down in wicked problems and fads. Only the UN can fix the UN, if at some stage it gets strong leadership. The Summit won’t be squashing or merging any humanitarian agencies, and even a central fund with rational governance arrangements would take some time to starve ineffective agencies and fatten effective ones. However, what the Summit can do is focus on more tractable national and global public policy measures.

Above all, governments are well able to create a new, core financing mechanism independent of the UN and the multilateral development banks (MDBs) and run it with the rigour and profile of the World Bank’s concessional financing arm, IDA. The governing body of this mechanism could become an important global policy forum. Its resources, mobilised via scheduled replenishments, could be used to benefit both low- and middle-income host countries via blending with the MDBs’ and other resources, without any need to change IDA’s eligibility criteria.

Beyond this, governments could agree to lightly and discreetly tax big surges of public and official generosity to help fund protracted crises, and use their tax systems to discourage the diffusion and unproductive competition that afflicts private giving. Finally, OECD donors could agree, admittedly less easily and not without strong leadership from one or more of their number, on revisions to ODA accounting rules that would create sensible incentives for refugee acceptance and targeted private giving.

Robin Davies is the Associate Director of the Development Policy Centre. This blog is part of a series.