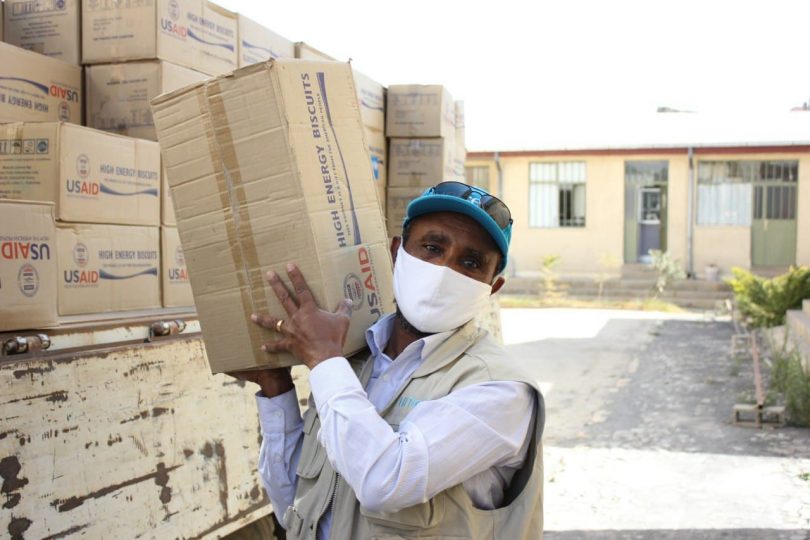 Just over a year into President Joe Biden’s four year term, how is the United States now approaching international development and aid? This first of a two part blog focuses on the US aid budget, policy and strategy, and key sectoral priorities.

The US remains the OECD’s largest country contributor of Official Development Assistance (ODA), providing an estimated USD42 billion in 2021. But it is also one of the OECD’s least generous donors relative to its economic size, providing just 0.18% of its Gross National Income as ODA, well below the 2021 average of 0.33%.

The Trump Administration was openly hostile to aid and attempted on multiple occasions to cut the development budget. These attempts were, for the most part, successfully countered by some of Trump’s own (short-lived) cabinet members and “internationalist” congressional Republicans. As noted in mid-2020, in the context of rising competition with China and the COVID-19 crisis, “both the foreign aid budget – thanks to the US Congress – and USAID itself have emerged broadly intact as four years of the Trump administration draw to a close”.

This analysis is borne out by the budget numbers which show a remarkable degree of stability despite the change in administration. 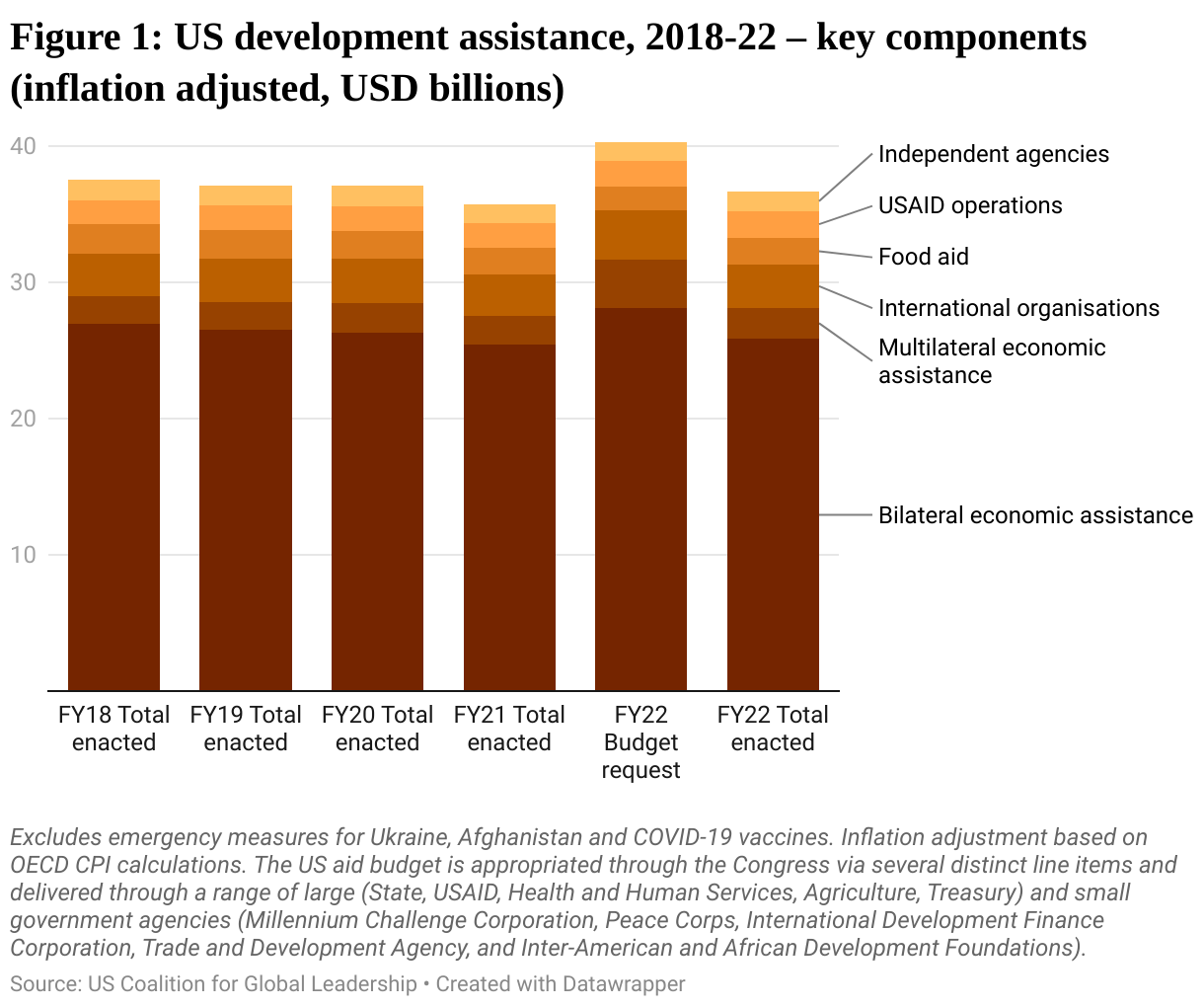 In real terms, and excluding multiple emergency packages such as those announced in response to the ongoing Ukraine crisis, there has been little change in the main components of the US aid budget between 2018 and 2022. While the OECD reported a 14% real increase in total US ODA in 2021, much of this increase was due to emergency funding for COVID-19 vaccines. And earlier this year the Biden administration failed in its bid for larger increases in bilateral and multilateral economic assistance for 2022. This resulted in a final Omnibus Bill, signed in March, that fell short of the Administration’s annual request by around USD3.6 billion on the aid front.

The US Global Leadership Coalition – a bipartisan lobby group comprising former Cabinet officials, Senators and Representatives, as well as senior military officers – estimates that overall US funding  for international affairs will increase by just 1% in 2022. It described the final spending deal as “not a serious response to the multitude of growing global threats that impact our health, economic, and security interests” and “a self-inflicted wound”. It was also critical of the Administration’s “last minute” withdrawal of USD5 billion in emergency COVID-19 funding from its spending proposals. This latter decision has raised the prospect of the US winding down large parts of its COVID aid, despite the large gaps in global vaccination rates and the ongoing threat of new, more dangerous variants. 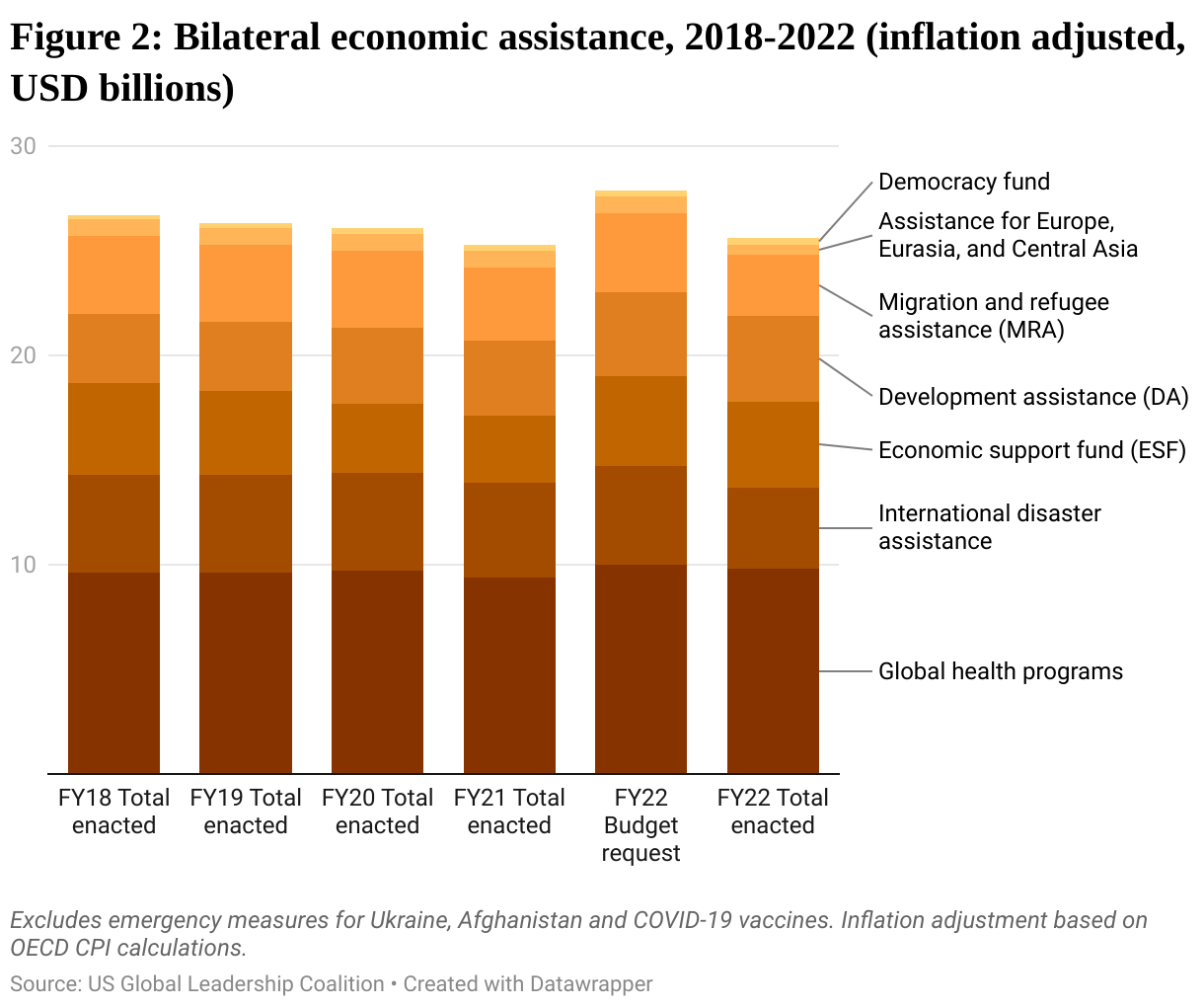 Within the largest category, “bilateral economic assistance”, the significant cut in funding for international disaster and migration and refugee assistance has also been criticised. Interaction, an alliance of international NGOs, called the Bill “a disappointing reflection of the United States’ global leadership role in funding foreign assistance”. While much of this decrease will likely be offset by the large packages of humanitarian and refugee assistance included in the Ukraine response, this will come at the cost of US support for other humanitarian crises in the Middle East, Africa and Asia.

In terms of policy and strategy, the Biden Administration’s broader policy goals are set out in the 2021 ‘Interim National Security Strategy Guidance’ which declares that “global development is among our best means to articulate and embody our values, while simultaneously pursuing our national security interests”. The more recent ‘Indo-Pacific Strategy’ highlights the importance of development cooperation across several domains, including economic growth, resilient infrastructure, good government and accountability, and digital infrastructure.

At a more detailed level, the State Department-USAID ‘Joint Strategic Plan (JSP), 2022-26’ sets out a range of multi-year goals and performance measures in global health, climate change, humanitarian assistance, economic growth, governance, and inclusive development. USAID Administrator Samantha Power has prioritised a more locally-led development program – “one that that is more diverse and willing to engage with new partners, more equitable in its impact, and more responsive to local voices.” The JSP includes a strengthened focus on evaluation, learning and impact – a welcome corrective following the Trump Administration’s decision to opt out of an OECD mid-term review of US development assistance.

In terms of sectoral priorities, unsurprisingly health features heavily. The US remains the world’s largest global health donor, with over USD9.8 billion appropriated in 2022 for efforts to support the ongoing COVID-19 response, advance sexual and reproductive health (a clear area of difference with the Trump Administration), address HIV/AIDS, malaria, and tuberculosis, strengthen health systems, and scale up support for global nutrition.

Geopolitics also makes a less than subtle appearance in the final 2022 budget, with Congress authorising USD300 million for the “Countering Chinese Influence Fund” and USD295 million for the “Countering Russian Influence Fund”. These funds are designed to “counter malign influence efforts by both countries, including diplomatic efforts associated with China’s Belt and Road Initiative and Russia’s efforts to sow distrust in democratic institutions around the world”.  While these programs are jointly administered by the State Department and USAID, it is unclear how much of this funding is ODA eligible. In the case of China, USAID has stated that this may involve increased support for civil society organisations and independent media in the Asia Pacific region in order to prevent “elite capture”.

The second part of this blog will explore the geographic focus of US aid efforts, donor cooperation with Australia and the Administration’s recently released 2023 budget bid for development assistance.

This blog is the first in a two-part series.