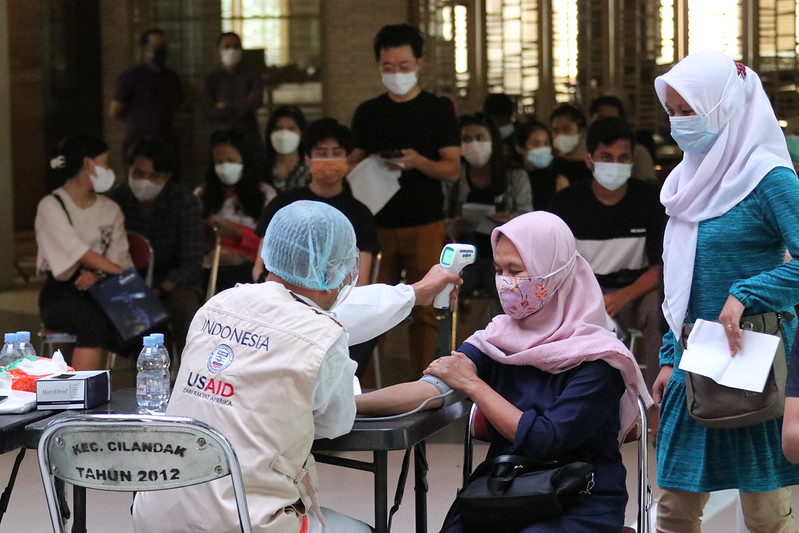 This blog continues our look at US development assistance under President Biden and focuses on geographic flows, donor cooperation with Australia, and the priorities of and prospects for the Administration’s 2023 budget bid.

Despite the United States’ emphasis on the Indo-Pacific and the prominence of regional competition with China in its foreign policy over the last decade, its 10 largest aid recipients in 2020 were, aside from Afghanistan, all in Africa and the Middle East – which is little change from 2011 (which included Afghanistan, Pakistan and post-earthquake Haiti as the exceptions). This reflects its continuing focus on fragile and poorer countries, as well as – sometimes adjacent – countries where US military forces have been directly engaged. 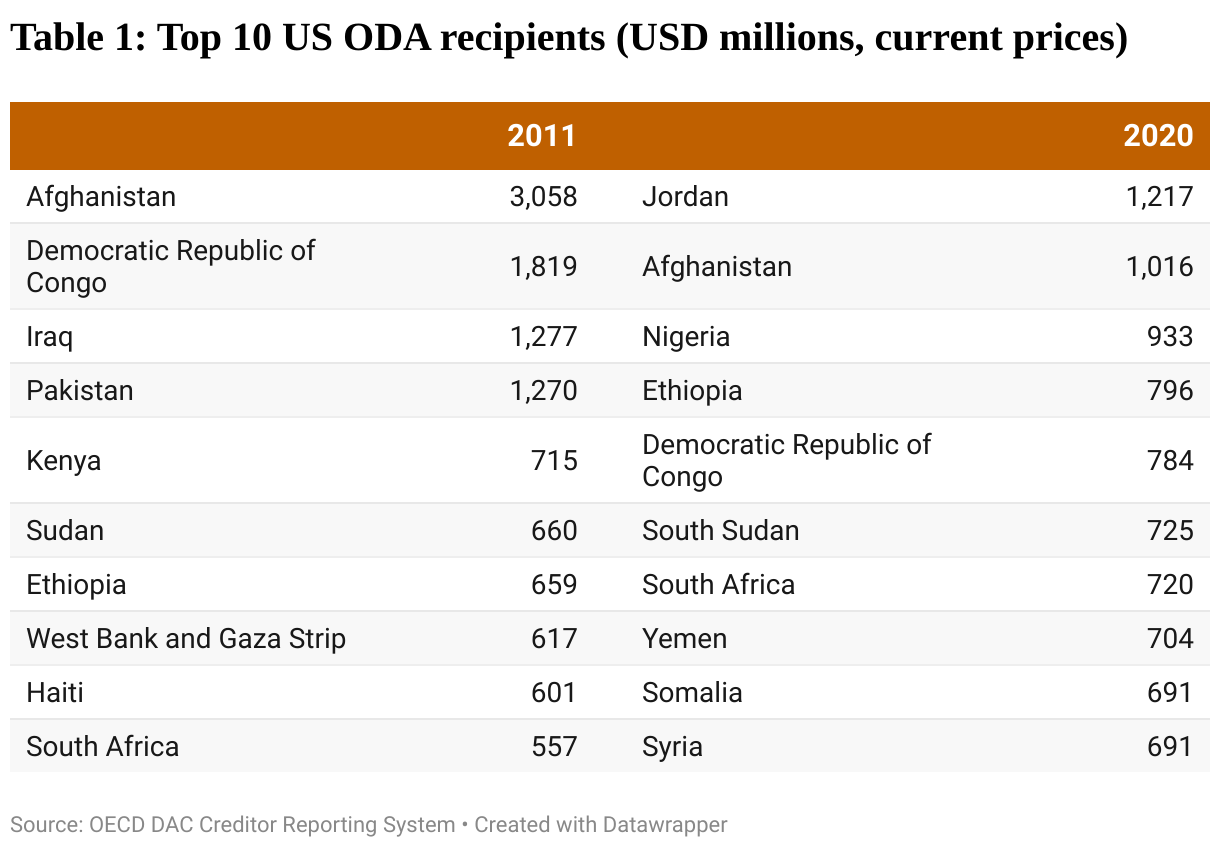 The US has, however, directed much of its COVID-19 “vaccine diplomacy” to the Indo-Pacific, with the top five recipients of its vaccine donations to date comprising Bangladesh (64 million doses), Pakistan (62 million), Vietnam (40 million), Indonesia (36 million), and the Philippines (33 million).

While the US is an active donor in all of Australia’s top 10 partner countries it is much less prominent in Australia’s largest Pacific recipients (Papua New Guinea, Solomon Islands, Fiji, Vanuatu), a smaller donor in our more proximate Southeast Asian neighbours (Timor-Leste, Indonesia), a larger donor in more distant Southeast Asian countries (Myanmar and the Philippines), and a much larger donor in South and West Asia (Bangladesh, Afghanistan). The latter region is where many of Australia’s bilateral aid cuts have fallen over the last decade, despite the “Indo-Pacific” frame.

This perhaps reflects an informal geographic “division of labour” – but one that may be in flux as the US seeks to further respond to China’s growing presence in the Pacific and as calls for the next Australian government to expand its diplomatic and development footprint Southeast Asia intensify. 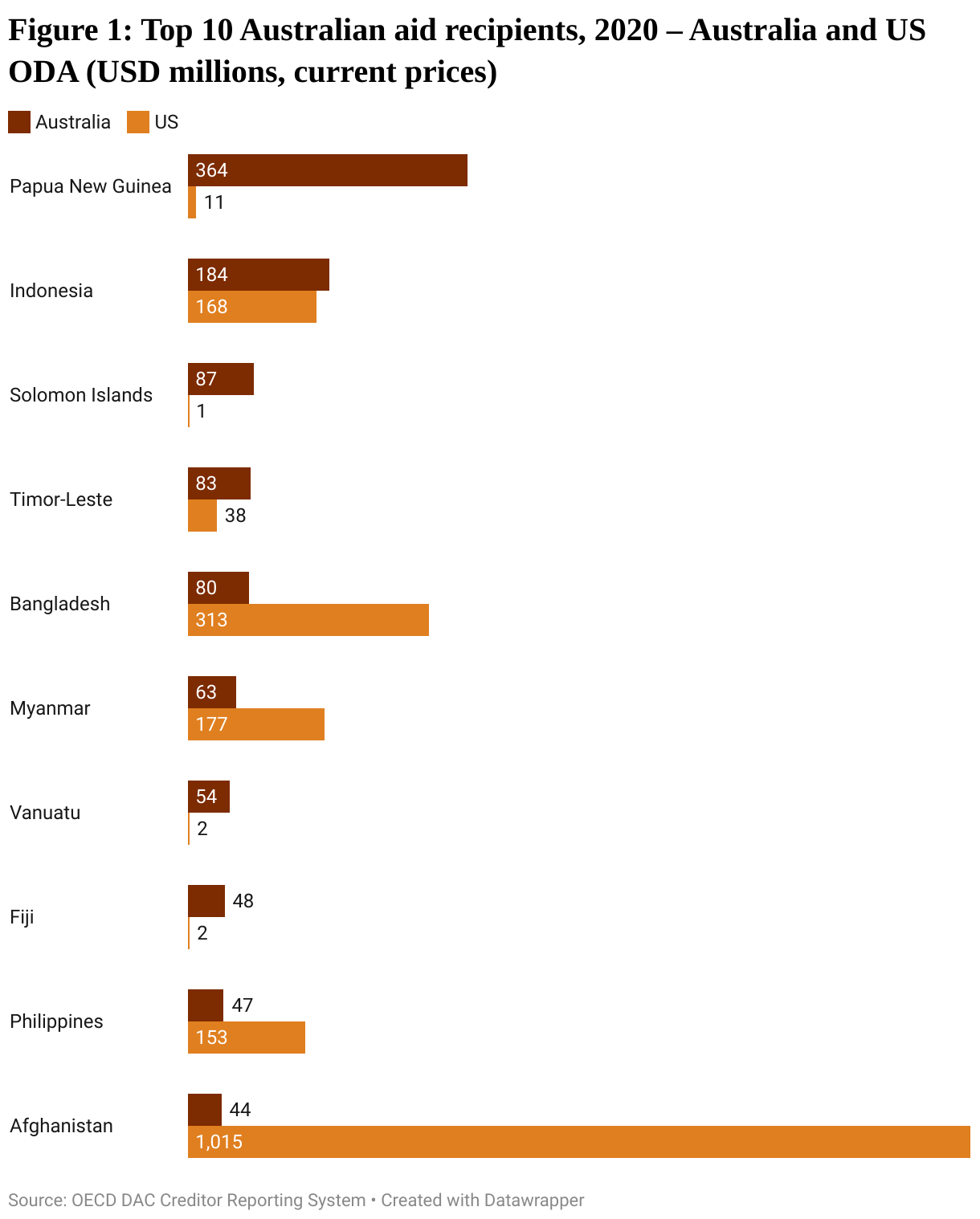 Donor cooperation between the US and Australia has deepened over the last decade. A 2010 MOU originally signed between AusAID and USAID was refreshed in 2020 and, in late 2021, USAID posted its first dedicated representative to Australia. The MOU identifies health security, education, governance, economic growth and infrastructure, gender equality, and climate change as shared priorities.

Among the current joint USAID and DFAT projects is a five-year Mekong Social Safeguards Program which aims to “accelerate the sustainable infrastructure transition in the Mekong Region by reducing negative environmental and social impacts of large-scale energy and transport projects in Cambodia, Lao PDR, Myanmar, Thailand, and Vietnam”. This program is undertaking a survey in northeast Thailand of local communities potentially affected by the China-constructed Bangkok-Nakhon Ratchasima high-speed railway project, a component of the larger Kunming-Singapore rail project.

As founding members of the Quadrilateral Security Dialogue (along with Japan and India), the US and Australia have been part of this group’s strengthened focus on development over the last two years, including a regional vaccine sharing initiative and cooperation on infrastructure standards. It is not clear whether this kind of “mini-lateral” cooperation will play a role in shaping Australia’s long-term budget and policy settings.

Looking ahead, the Biden Administration recently released its international affairs budget bid for 2023. In addition to boosts for global pandemic preparedness (including anti-microbial resistance), climate finance and the record bid for gender equality assistance, the proposed aid spend includes: additional assistance for the Western Hemisphere, as part of US efforts to address irregular migration from countries such as El Salvador, Honduras and Guatemala; increases in global humanitarian and refugee assistance; enhanced US contributions to multilateral development banks; and 200 more civil and foreign service positions for USAID to support aid effectiveness and stronger local partnerships.

In contrast to Australia, USAID is seeking to further expand a dedicated innovation stream through additional funding for its Development Innovation Ventures initiative. And it is pursuing reforms to USAID’s procurement systems to enhance competition and local participation, although this is predicted to face “perennial challenges around defining [localisation], along with vested interests, staffing constraints, and a rigid regulatory environment”.

Over the medium term – notwithstanding the Biden Administration’s ambitions and the horse-trading to come – the November 2022 US mid-term elections raise the prospect of a Republican-controlled Congress, one that could be decidedly more “Trumpian” in composition and outlook than its 2016-2020 predecessor. This would further constrain the Biden Administration’s room to manoeuvre when it comes to increasing aid, including to the Indo-Pacific.

In this scenario, pressure from the US for an incoming Australian government to do more in the region to counter China’s development forays, both in and beyond the Pacific, may well increase. This would put further strain on an Australian aid budget that is projected to fall in real terms over the next four years.