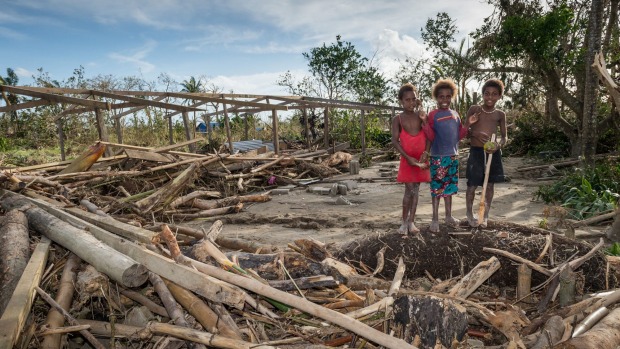 Vanuatu is currently faced with the daunting task of reconstruction in the wake of one of the strongest cyclones to ever hit the country. An earlier post noted that reconstruction will be expensive, and argued that the most important question for the Vanuatu Government in the coming years will be how to finance that reconstruction. That challenge will be the focus of this blog post.

Estimates of the damage caused by Cyclone Pam are still being undertaken. In the meantime, we can look at other disasters in the region for guidance. In the case of Cyclone Evan in 2012, the damage in Samoa was estimated at 30 percent of GDP. This is likely to be an underestimate in the case of Cyclone Pam, which impacted most provinces in Vanuatu. Nevertheless, if we use 30 percent of GDP as a guide, a similar impact in Vanuatu would equate to damage of $248 million USD, or 26,601.7 million vatu (an amount equivalent to 140 percent of annual government revenue).

Much of this damage bill will of course be absorbed by households and businesses – only some of which are likely to have had insurance cover. But the Vanuatu government will also fund considerable reconstruction, given the damage to public infrastructure such as schools, health clinics, and government administration buildings. It is also assisting households affected by the disaster. The government has already funded much of the emergency response and initial recovery effort; in its appeal for emergency relief, the government sought $29.4 million USD, and received about half that amount. In its subsequent Humanitarian Action Plan, which will cover three months to the end of July, the government has requested $13.5 million USD.

Revenue raising options are limited. The government is unlikely to increase taxes just when ni-Vanuatu are reconstructing their homes and livelihoods (in fact, it has lowered import duties on certain goods, such as farming tools, seeds and building materials). The same consideration will also restrict its ability to widen the tax base. The establishment of income taxation is a worthy long-term endeavour, but not something that should be pursued in the aftermath of Cyclone Pam. The imposition of a disaster levy, as occurred in response to the Queensland floods in Australia in 2010–11, would adversely affect households hit by the cyclone. (In the case of the Queensland flood levy, the Commonwealth Government was able to transfer resources collected by the tax from non-affected parts of the country to flooded areas – an exercise that is less feasible in Vanuatu given that most of the country was struck by the disaster.)

External funding will therefore be required.

A surge in aid provided in response to Cyclone Pam will cover some reconstruction costs. Australia has announced $15 million AUD in assistance (less than $5 million of which, it appears, will take the form of budgetary assistance), the ADB is giving $5 million USD, and the World Bank a similar figure. The Pacific Disaster Risk Financing and Insurance scheme has also provided $1.9 million USD. This funding has been welcomed by the Vanuatu Government. However, it is grossly inadequate for the task of reconstruction. This is hardly a surprise. As noted previously, experience around the world tells us that increases in development assistance never fully fund reconstruction. Past disasters in Vanuatu (three cyclones in 1985) and Samoa (Cyclone Evan in 2012) have resulted in aid surges of approximately 5 percent of GDP – far below the cost of damage caused by these events.

The Vanuatu Government will need to borrow funds for reconstruction, as did the Samoan Government after Cyclone Evan. It makes sense to do so. Access to finance for reconstruction is an essential element of recovery, and one that influences the severity [pdf] of the economic impacts of a disaster. Cyclone Pam was not like other cyclones that regularly hit Vanuatu. It was a unique event, which one hopes, will not be repeated for some time.

Vanuatu is currently in a sound fiscal position, with public debt of only 21 percent of GDP, well below the 40 percent threshold recommended by the IMF. On the face of it, the Vanuatu Government is therefore in a position to borrow money for reconstruction. However, look more closely and the government’s position is less rosy. It currently has a significant pipeline of infrastructure investments forecast. These projects are to be funded through a combination of grants and concessional loans from donors, and would result in a considerable increase in public debt – forecast to rise to just below the 40 percent threshold identified by the IMF (and this is optimistic, given that it does not account for the economic impacts of Cyclone Pam). 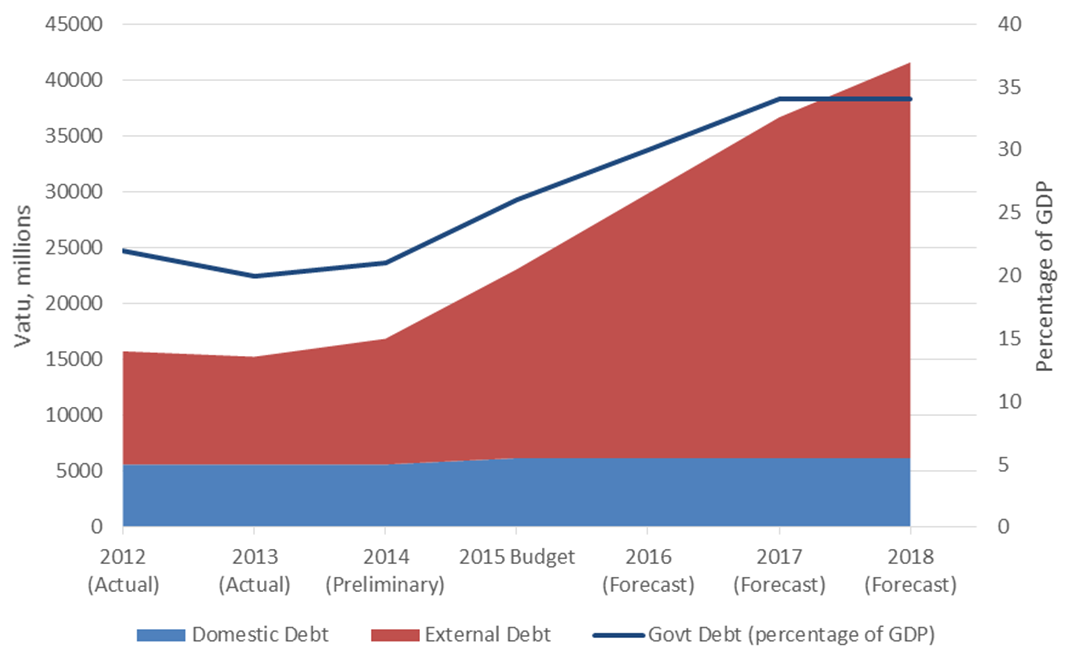 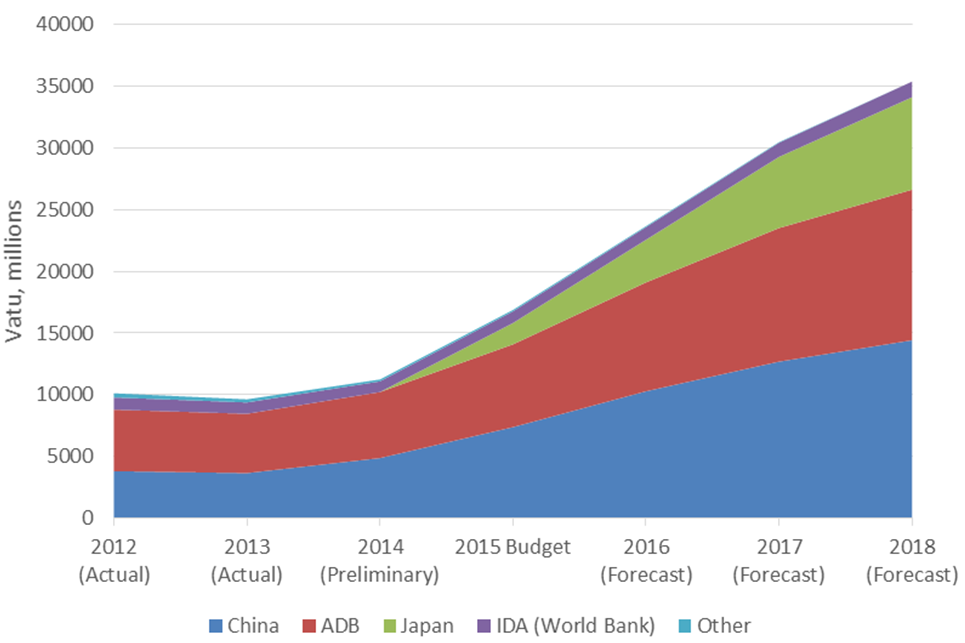 The government will need to reconsider whether infrastructure projects that had been planned prior to Cyclone Pam should proceed. There are strong fiscal grounds for cancelling or postponing, where feasible, given the financial and logistical demands that reconstruction will place on both government and the private sector in Vanuatu. If all of the projects that were planned prior to Cyclone Pam were to proceed, it is difficult to see how the government could fund them in addition to reconstruction without placing itself in a precarious financial situation. The government will be conscious that the more it borrows, the more vulnerable it is to future disasters, whether of an economic or natural variety. The inflow of funds also risks placing upward pressure on the vatu, and the construction activity associated with such projects would exacerbate inflationary pressure caused by reconstruction activity (Samoa experienced this in the wake of Cyclone Evan).

The government must therefore balance the need to finance reconstruction with the long term risks associated with that debt.

However, cancelling projects will also involve costs, and will not always be feasible. Some projects are well-advanced. Construction work has already been tendered, and construction companies have invested in plants and machinery. There is concern in Vanuatu’s private sector that these projects will not proceed, leaving businesses out of pocket. The decision about whether or not to proceed will therefore need to be made cautiously, with a view to the impact on the government budget, private sector, and the economy over the long run.

Where possible, projects should be modified to incorporate reconstruction work. There are some projects where this is clearly possible. The Vanuatu Tourism Infrastructure Project, for example, which includes beautification of the Kalsakau Drive (Port Vila seafront), has been fast-tracked by donors in response to government requests. Rehabilitation will include reconstruction work. This ensures that the project meets the needs of Vanuatu, while also honouring contracts.

The debt implications of projects should also be considered. Many of the infrastructure projects in the planning pipeline involve both concessional loan and grant elements, which makes them attractive even if there is no potential to incorporate reconstruction activities. The Port Vila Urban Development Project is a case in point. The project is estimated to cost $39 million USD, but most of this is being provided as a grant by DFAT – borrowing for the project will involve only $5 million. Debt associated with this particular project is therefore minimal.

Projects that are good candidates for cancellation or postponement are a) those that require the government to borrow considerable funds on less concessional terms, and b) those that are less advanced, or where financiers are willing to amend contracts. One project that fits the first characteristic is the road upgrade in South Tanna and Malekula, which is being funded by China Eximbank. The conditions associated with this loan are not very concessional – interest of 2 percent will be charged over 20 years, with a five year grace period. The loan is also reported to be very large, at $50 million USD (for purposes of comparison, the Lapetasi wharf development is being funded by a Japanese loan of approximately $40 million USD, which will incur an annual interest payment of 0.56 percent and be repaid over 40 years, with a ten year grace period). Outright cancellation is unlikely, given that ground was broken for the project last week, but modification or downsizing could be possible – the second phase of the project, focused on Malekula (which was not so badly affected as other parts of the country), has not yet begun.

The economic impact of a project is also important, of course. Projects that generate economic activity, and thereby increase revenue that the government can use to repay debt, are attractive. However, it is worth stressing that when considering economic impact, a conservative and risk-averse approach is appropriate, given Vanuatu’s exposure to natural disasters and economic (and policy) developments in neighbouring countries.

The Vanuatu Government clearly has some difficult decisions to make as it seeks to ensure that sufficient funding is available for reconstruction. Although public debt is currently low, the government has entered into agreements with development partners and contractors for a range of infrastructure projects. These should be amended to include reconstruction where possible. In some cases, where projects are less advanced and grant finance is minimal, it will make sense to postpone projects (possibly indefinitely). Cancelling or postponing any project will be a painful and contentious exercise. Not doing so will also be painful – in the long-term – as it will limit the government’s ability to borrow funds for reconstruction.