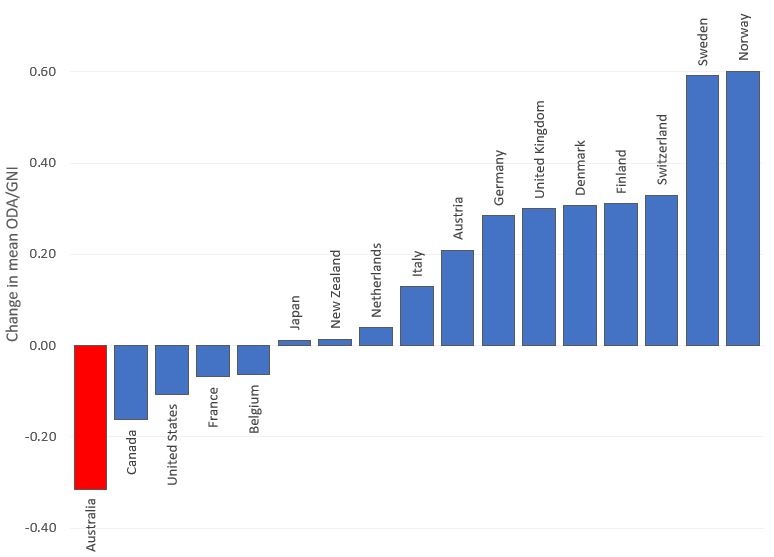 Development Policy Centre staff and associates have used many methods to study Australian government aid. Richard Moore used qualitative interviews to gauge the impact of AusAID’s integration. Luke Levett Minihan and I undertook website content analysis to assess aid transparency. Matthew Dornan, Sabit Otor and I used project data to examine aid effectiveness. Ashlee Betteridge studied the aid program’s use of communications tools. Our Stakeholder Surveys have tracked changes in aid program performance. And Stephen Howes has systematically investigated problematic parts of the aid program, such as the Innovation Exchange (aka the iXc).

Today we are launching a new report in which, Matt Dornan, Sachini Muller and I have analysed publicly available data on aid flows. (The report has been a long time in the making: Matt and Sachini no longer work at Devpolicy, but are co-authors of the paper, reflecting their earlier work and insights.)

In this blog post I will cover the four key points from the report.

While most donors have become more generous, Australia has become less

Usually, as countries become more affluent they become more generous aid donors. Specifically, as their GDP per capita goes up, countries usually give an increasing share of their GNI as Official Development Assistance (ODA). As a result, most of the countries that were members of the OECD DAC (the OECD’s donor club) in the 1970s are more generous donors now than they were in the early 1970s.

There are exceptions though. Australia is one. In fact, it’s the donor whose ODA/GNI ratio fell the most since the early 1970s. (In the figure below we’ve averaged ODA/GNI across five-year periods and compared the first (1970-74) to the most recent with data (2015-19). As we discuss in the report, there are other ways of making the comparison. Australia came out worst in almost all of them.) 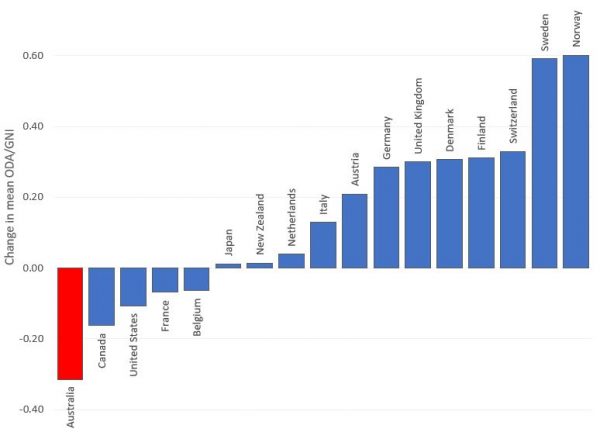 When donors report to the OECD they state which of their projects are ‘principally’ or ‘significantly’ focused on gender and women’s empowerment. This is self-assessment, and is not perfect, particularly in the case of the ‘significantly focused’ measure. But the ‘principally focused’ measure is good enough to use in comparisons. And when we compared Australia with other donors, Australia performed very well. 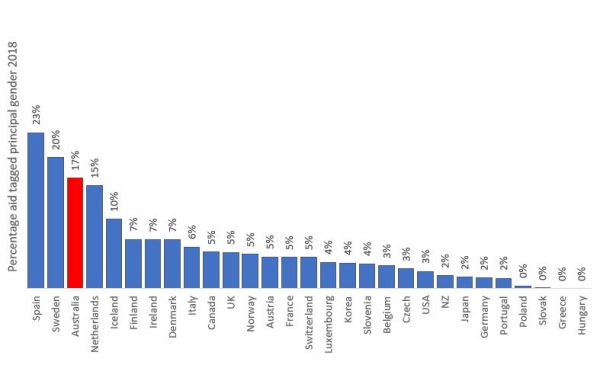 Usually in the report we used multi-year averages to prevent findings from being driven by idiosyncratic years, but owing to (legitimate) changes in Australia’s reporting practices in 2018 we did not do this for gender. The same changes make comparisons over time difficult, but Australia’s gender focus has clearly improved since 2004, presumably because of the emphasis Julie Bishop placed on the issue.

Australian aid focused on climate change adaptation in the Pacific 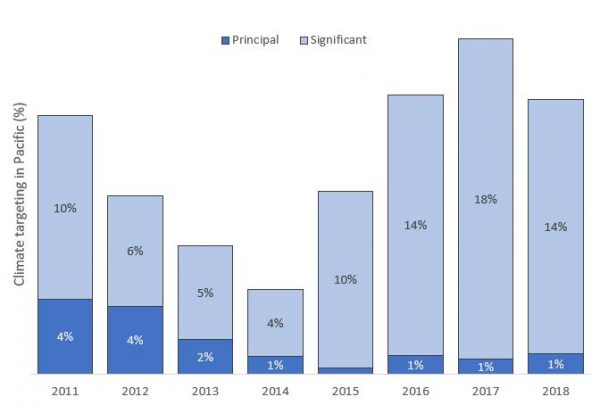 Australia doesn’t fragment aid too much across recipients

Generally, donors should avoid fragmenting aid across too many countries. Less fragmentation ought to mean lower overheads and greater expertise about the countries donors focus on. Australia, as we show in the report, gives some aid to almost every eligible recipient country on earth, but mostly it gives small amounts. The bulk of Australia’s aid is focused on a few large recipients (Papua New Guinea, Indonesia and Solomon Islands). As a result, when we compared Australia to other donors using a standard measure of fragmentation (the Herfindahl–Hirschman Index) we found Australia performed well. 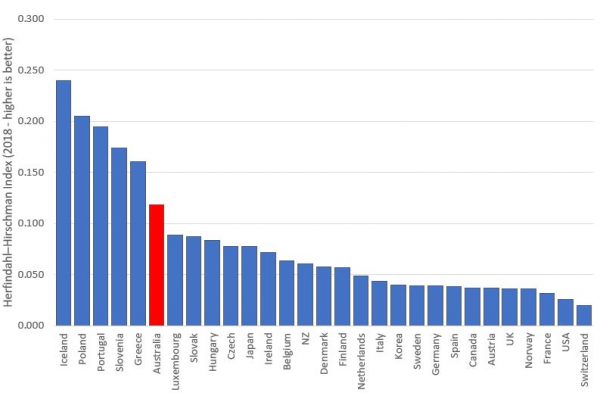 There’s a lot more in the report: we look at sectors and where Australia gives its aid; we also look at aid volatility and project fragmentation. We’ve placed most of our data online too in a ZIP file.

Data on aid flows won’t reveal everything important about aid. Other approaches are needed. But analysing aid flows provides vital clues in the puzzle of understanding donor performance.

You can read the full report here and the executive summary here.

This research was supported by the Bill & Melinda Gates Foundation.