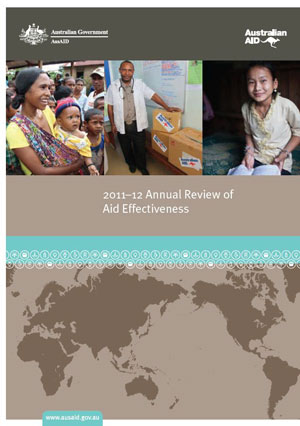 As part of the scale-up of aid begun under John Howard and continued by the Rudd and Gillard Governments, the agency formerly known as AusAID invested a significant amount of effort in improving its development effectiveness capacity. It had a Quality, Performance and Results Branch that set out the “minimum expectations for performance management and evaluation in AusAID”, and an Office of Development Effectiveness (ODE) that independently evaluated AusAID funded programs. After a lull in releasing evaluations, the former agency had published multiple studies as part of its transparency charter and separately under the ODE banner. Notwithstanding critical comments relating to its Annual Review of Aid Effectiveness (see here and here), AusAID’s progress on aid effectiveness represented a welcome and important development.

That was AusAID in the past: what does the future hold? Julie Bishop recently commented on the need for a greater focus on aid effectiveness, transparency and, in particular, for benchmarks to be met prior to further funding increases. This should give us hope that aid effectiveness will not be lost in the DFAT-AusAID merger process. But a key question remains, how will aid effectiveness be measured if the objectives of Australian aid become, for example, “to promote economic growth, poverty reduction and the national interest through support for Australian foreign and trade policy” (based on comments in earlier blog posts here and here)?

Consider project one, where our Foreign Minister, after a request from an Australian company and a Minister in a Pacific Island country, decides to fund the construction and subsequent maintenance of a road from a remote area with mining potential to a sea port (hence facilitating extraction and export of raw materials). In the short term the road construction may employ and benefit local workers, while in the medium term it may promote economic growth and reduce poverty as a by-product of royalties to landowners and taxes to the government. Given mining is capital intensive, long-term direct employment of local labour by the mining company may be limited.

Under this project our national interest is promoted, given the Australian connection and the request from a friendly Minister. Hence, assume when measuring the effectiveness of this aid, the economic growth, national interest and trade policy components receive a big tick, while immediate poverty reduction receives a small tick.

Consider an alternative project — project two — where we acknowledge a large proportion of the same Pacific Island country’s population suffers from diabetes and require amputation. Instead of spending aid money on road construction and maintenance, we could instead facilitate greater access to wheelchairs and prosthetic devices for disabled people in the same country. Assume that as a result of this intervention, poverty reduction in the short-term receives a big tick. However, the benefits to economic growth, trade policy and the national interest receive, at best, a small tick.

A development practitioner might be indifferent about the two projects. While it would depend on the details, from a distance both are good for development: the first promotes economic growth, the second has a more immediate impact on poverty. In such a situation, under the new regime project one might get the nod because it appears more strongly aligned with our national interest.

How then should project one be evaluated? If the objectives of the aid program change, the rubric or standards for measuring aid effectiveness are also likely to change. Aid effectiveness should be measured by performance not only against economic growth and poverty reduction, but also the national interest. This thinking is not new. Andrew Natsios in a 2010 Centre for Global Development paper, argues that there should be political based evaluation standards, where success is judged by achieving objectives linked to foreign policy, rather than (or as well as) development performance standards.

For AusAID, or now DFAT, this is complicated enough. I wonder what it means for our implementing partners. Surely they are not expected to consider the implications of the intervention for national interests. Hence, I’m assuming partners would still measure effectiveness of aid on poverty alleviation and economic growth, while DFAT may need to consider effectiveness according to aid’s new objectives. Interesting times ahead, but whatever DFAT’s preferred path, my plea is that we maintain the momentum of the aid effectiveness agenda promoted by both Coalition and Labor governments over the last decade.

Dinuk Jayasuriya is a Research Fellow at the Development Policy Centre. He was formerly with the World Bank Group and currently advises the Asian Development Bank on impact evaluation issues.