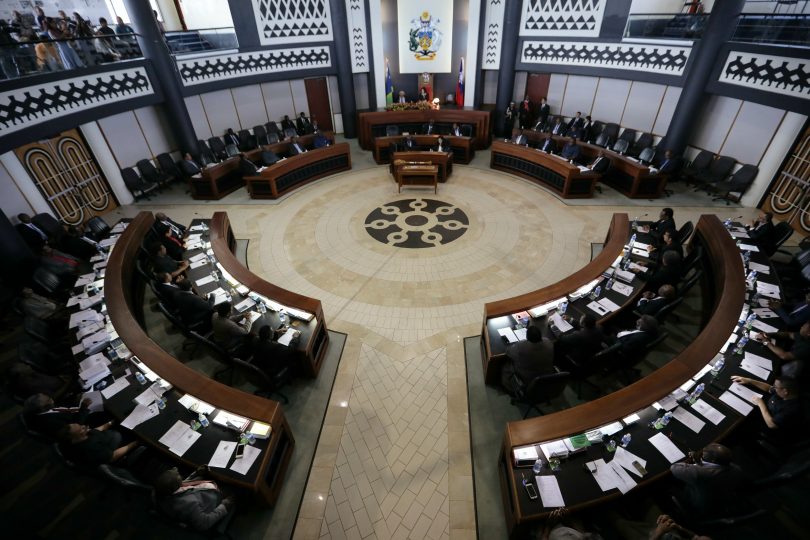 Solomon Islands Parliament (Office of the President, Republic of China/Flickr/CC BY-2.0)

At the beginning of 2017, Solomon Islands began to roll out its three-year National Anti-Corruption Strategy (NACS). The NACS aims to reform existing anti-corruption legislation and policy, and add new components to the country’s anti-corruption framework. The strategy is geared toward addressing weaknesses in public administration, the judiciary, law enforcement, the private sector and civil society.

However, at the start of 2018, many are pessimistic about the potential for the Solomon Islands’ government to pursue this anti-corruption agenda. The most significant blow to the NACS came in November last year, when now former Prime Minister Manasseh Sogavare was removed from office by a vote of no confidence. Although there is much debate about what motivated Mr Sogavare’s dismissal, he is likely right in accusing his detractors of attempting to derail the much-debated Anti-Corruption Bill (ACB), a key part of the NACS. The ACB aims to establish an Independent Commission Against Corruption (ICAC). The proposed ICAC would have the power to prevent, investigate and prosecute corruption offences. Mr Sogavare’s office noted that some of the nine ministers who defected from his camp were those who had been hindering the progress of the ACB, and suggested these ministers feared prosecution, should the ACB ever pass.

The second bill that has been put on hold aims to enable whistleblowers to report corrupt activities without fear of repercussion or identification. It is increasingly recognised [pdf] that comprehensively protecting whistleblowers is central to safeguarding and promoting integrity and accountability in both public and private institutions. The Whistleblowers Protection Bill proposes to do just that: it includes heavy penalties for victimising and exposing whistleblowers. However, such offences must be reported to the proposed ICAC, which, like this new piece of legislation, may never see the light of day.

There are reasons to be concerned about these political maneuvers. In particular, they highlight the significant difficulties faced by those seeking to challenge political corruption, which has been linked to organised crime and the decimation of the country’s natural resources.

Yet, for anti-corruption reformers, not all is lost.

A new Ombudsman Act was passed before Sogavare’s departure. This Act has been the only legislative component of the NACS to be introduced so far, and it is important for a number of reasons. First, Section 13(2) of the Act allows complaints to be made orally, whereas Section 8 of the previous Act mandated complaints be made in writing. The codification of this practice is a step forward for the accessibility of the country’s anti-corruption framework – particularly as a number of Solomon Islanders are illiterate.

Section 22(2) also imposes a hefty maximum penalty for refusal to furnish information to investigators, amounting to 50,000 penalty units (estimated to be 50,000 SID or 8178.31 AUD) and five years’ imprisonment, while the previous Act carried a fine of up to 200 SID and one year’s imprisonment. Section 15(b) of the new Act allows complainants to retain anonymity and Section 23 provides expanded powers of entry and seizure to investigators. Although it has yet to be gazetted, these and other changes to the legislation have the potential to significantly improve the Ombudsman’s investigative capacity.

In addition, while a new ICAC has been championed by some, it is far from certain that once in place, this institution would meaningfully address corruption in the country. For a start, it is unlikely that Solomon Islands has the resources to properly support such an institution: as witnesses before the country’s Bills and Legislation Committee have suggested, it would likely exacerbate existing logistical problems and further diffuse already stretched funds. (This is despite a proposal [pdf] for the agency to be ‘cost neutral’).

Moreover, while the ICAC is supposed to play a coordination role, there is no guarantee that existing agencies would comply: Solomon Islands’ anti-corruption agencies have well-documented problems with information-sharing. In line with growing international skepticism around the effectiveness of such anti-corruption agencies in developing countries, the defeat of the Solomon Islands ICAC may not be as detrimental as it might appear.

While Solomon Islands has made some gains on the anti-corruption front, there is still much to do in a climate of political pushback. The new Prime Minister Rick Hou has, in the past, stood against corruption and poor governance. While there is little appetite for large-scale reform, the new PM may be open to implementing other anti-corruption measures.

The NACS offers some useful suggestions for what reformers might focus on next. First, much more needs to be done to support the country’s nascent civil society, which has been at the forefront of recent anti-corruption protests. Sensibly, the NACS calls for more productive engagement with the churches, in order to bolster awareness about corruption. In addition, it promotes greater focus on corruption in non-state organisations, particularly the private sector, and bolsters support for overseeing public tenders. The NACS also calls for the development of anti-corruption training programs for the public sector, which if properly supported, might – given the current political climate – be a small but important step in the right direction. Finally, the strategy recognises the need to ensure better coordination amongst and support for existing anti-corruption organisations. All this, along with gazetting the Ombudsman Act, can be achieved without establishing a shiny new ICAC.

While the politics of anti-corruption does not look promising, the NACS still offers a worthwhile roadmap, although policy makers will have to anticipate the many political potholes on the road to reform.

Philip Matthews is completing his final year of a Bachelor of Laws (Honours) at the Australian National University. He has conducted research on anti-corruption institutions in the Solomon Islands and is currently undertaking a legal internship at the North Queensland Land Council, a Native Title Representative Body. He also holds a Bachelor of International Relations from ANU.