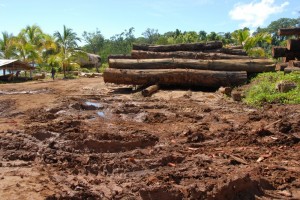 As we’re approaching the Regional Assistance Mission to Solomon Islands’ (RAMSI) ten year anniversary, as well as the anticipated transition towards a scaled down civilian mission, there appears to be a unanimous view in the region that the intervention has been a great success.

Ten years on, Solomon Islands’ economic growth rates have been robust; peace and stability have been maintained, with the exception of the April 2006 Honiara riots; and Solomon Islands’ political leaders could not be grateful enough in public for Australia’s contribution to making this turn-around possible.

The inconvenient truth, however, is that RAMSI’s success to date has had little to do with its self-described mission of building state capacity and a lot to do with its unwitting facilitation of rapid expansion in the unsustainable logging, and to a lesser extent, fishing industries.

Here also lies the seeds of the potential undoing of RAMSI’s apparent achievements. The expected exhaustion of commercial logging stocks in the Solomons over the next few years will likely destabilise the country again, although it is hard to predict precisely in what ways and to what extent.

To understand why, we must first note that contrary to the expectations of modernisation theory, which is still at the core of mainstream development policy ideas such as ‘good governance’, not all ‘good’ things come together. It is not essential for liberal market-led development, democracy and peace, to all arrive in one package. It is quite common, for example, to find that peace and stability are bought at the expense of empowering some unsavoury groups in the state and in society.

With this in mind, it is crucial to point out that in Solomon Islands the environmentally destructive and communally divisive practice of commercial logging on customary land has played a pivotal role from independence in bringing together otherwise flimsy political coalitions. Hence, RAMSI’s effect on the logging industry is not a side-show to the main business of state ‘capacity building’, but the most significant aspect of the intervention. Yet, preciously little attention has been paid to this by most commentators.

Unsurprisingly, for a country that never went through the industrial revolution and where a national market and collective national or class identities have never formed, ideological differences do not play a meaningful role in politics. Instead, politics is intensely local and election to office requires maintaining local support-bases, usually through the dispensation of patronage and material rewards.

In the near absence of alternatives for generating cash incomes, logging has become a widespread practice, and logger-backed politicians have been particularly powerful in Solomon Islands in most post-independence governments. Arguably, the violent conflict of the late 1990s had its origins in the Asian financial crisis. The crisis caused a sharp decline in log export revenue and thus undermined the logging-dependent structures of power running through the Solomons’ state and society, which although highly exploitative had kept the peace to that point.

By contrast, the RAMSI-era has seen a logging boom so big that logged timber volumes have reached extraordinary levels of six to eight times the estimated sustainable yield of 250,000 cubic metres per annum – more than double the previous logging boom of the 1990s.

Of course, nowhere in RAMSI’s stated objectives was ‘initiate an unsustainable logging boom’ mentioned. But by pacifying the country and cutting ‘red tape’ for foreign investment it has unwittingly (though entirely to be expected), unleashed a logging investment bonanza. No doubt, a greater portion of the rents generated from logging now ends up in state coffers than before. But this does not alter the inescapable fact that this logging boom will not last much longer, and its legacy in terms of long-term economic development will be minimal.

It is precisely because of this logging boom that most powerful interests in Solomon Islands have had no reason to resist RAMSI. It has bought the peace by reinforcing their already privileged position. But one wonders what the end of the logging boom would mean for the sustainability of this arrangement? Fledgling mining operations are a long way off replacing logging revenue. And because mining is highly localised, it is possible we could see the intensification of competition over control of mining rents (in a way not previously seen in logging) as timber is a widespread resource.

As RAMSI’s most significant ‘achievement’ to date has been supporting an unsustainable logging boom, I can only regrettably conclude that the current period of growth and stability is likely to prove achingly ephemeral.