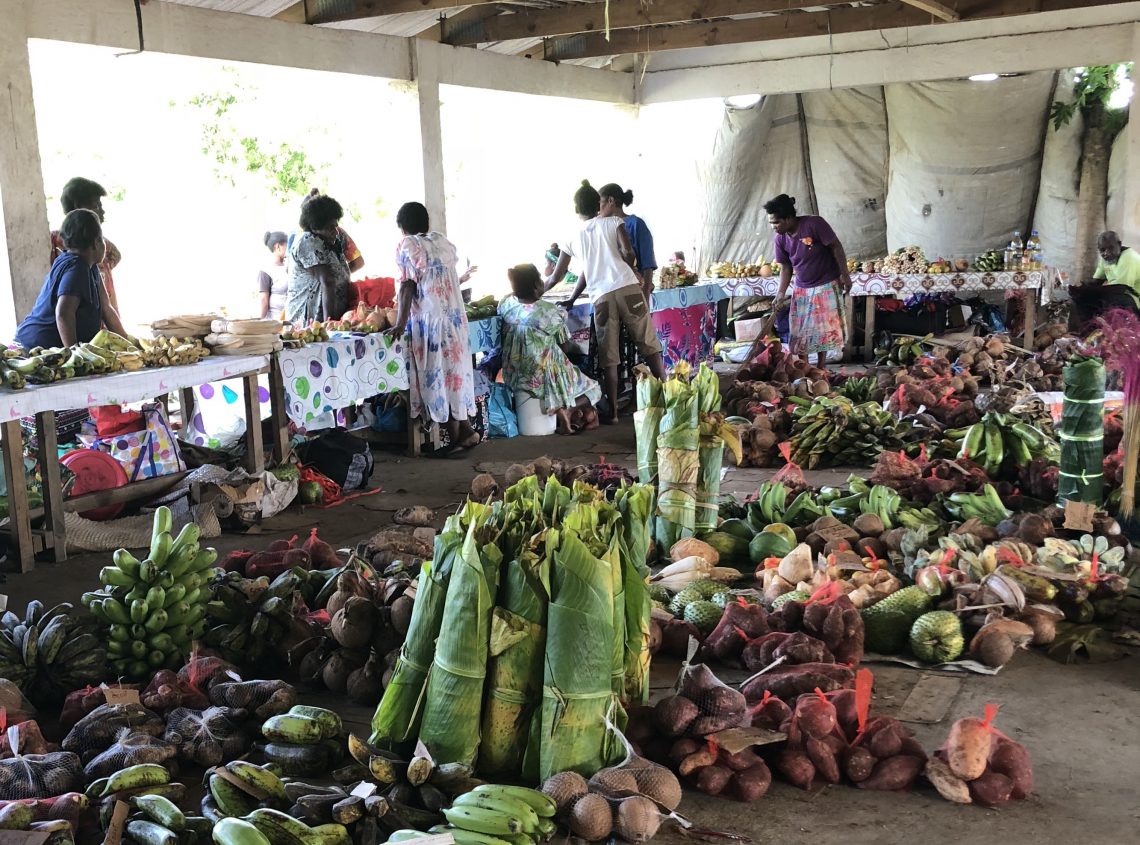 It is well known that disasters are experienced differently by different groups in society. Generally, disasters disproportionately affect women and girls, but women are also at the frontlines of disaster response and recovery processes. The recent double whammy blow in Pacific countries – COVID-19 combined with Cyclone Harold’s path of destruction – is no exception, with concerns arising around the additional burdens that are piling up on women as they take up significant responsibility for security and safety in the face of a lockdown and cyclone.

This blog reports on the findings of our place-based analysis of the response and recovery strategies used by some women in Vanuatu – the most at-risk country globally to natural hazards – in the wake of Cyclone Pam and the severe drought that followed. Cyclone Pam was the worst cyclone recorded to make landfall in Vanuatu while the following drought was the worst in 20 years.

We draw on the stories of 53 female market vendors. 75-90% of vendors in the Pacific are women, making the marketplace an appropriate space to explore the everyday disaster responses of Pacific women. As Mary Jack, a Ni-Vanuatu woman at the frontlines of emergency response, asserts, “…we can only support each other if our stories are being heard”. We hope to add to existing local voices that are already sharing and calling for change by detailing four key strategies and roles that women have undertaken in disaster recovery.

We found that in the aftermath of disasters, many women used informal social networks to share critical resources, such as crops, seeds, tools and food. A food exchange system, for example, emerged after Cyclone Pam, which allowed women on different islands to trade goods and help each other meet their needs. Some women also developed a grassroots insurance scheme whereby “they get together and do a little saving kind of scheme with each other” (Epule market vendor, 2018). The combined incomes act as emergency money to support speedier recoveries.

Women’s social networks also support the recovery of those who are particularly vulnerable or disadvantaged. Those who were less abled or burdened with heavy workloads as a result of disasters could, for example, rely on other women to sell products and collect incomes for them: “After the cyclone, all the widows and those that are weak, that can’t go to the market, [they] prepare their food and give it to someone who is stronger to go and sell” (Epau market vendor, 2018).

The interactive nature of marketplaces helps foster these informal social networks – across islands and villages – that can be drawn on in times of need.

Women as collectivising and leading forces

We also found that the ability of women to collectivise through formal associations and networks and exercise voice is critical in disaster recovery. Women have, for example, collectivised and lobbied against certain organisations and the local government to ensure their needs, rights and priorities have been catered for. In one instance, a group of women successfully lobbied against organisations that were excluding them from the distribution of material aid after the cyclone. In another instance, a group of women, whose market infrastructure (and therefore livelihoods) was destroyed, lobbied the government until they were granted another space to sell their products and maintain income flows. As one participant summarised, “…we empower women so that we will never face another disaster…Not just stand there and let other people do it. We can do it” (Market association executive member, 2018).

Women are also innovators, adapting their behaviours to prepare for future disasters. Through experimentation and innovation, women devised a series of adaptive farming behaviours, including: regularly trimming crops such as yam sticks to reduce the extent of damage when cyclones hit; planting different crops depending on rainfall and cyclone season; and changing the location of certain crops based on susceptibility to damage. These initiatives support speedier future recovery through lessening the initial damage that hazards can pose.

Women have also created seed banks in response to the extensive damage to gardens from Cyclone Pam. Every year, they collect and keep the seeds of important crops to create reserves that can be drawn upon when they need to quickly recover their gardens after disasters. This is critical for recovery as external assistance is often delayed by weeks or months: “I know that if one disaster comes now, I’ve saved some seeds…Don’t wait [for external assistance]” (Epau market vendor, 2018).

Women also had leading roles in maintaining post-disaster income flows for their households. After Cyclone Pam, for example, several women took advantage of the arrival of international aid workers by selling them locally-made handicrafts. In recognising the risks of depending on climate-sensitive income streams, women also diversified their livelihoods by using savings to springboard into other livelihood activities that are less climate-sensitive (e.g. guesthouses, weaving, and jam-making, among others). Social networks have supported the transfers of these skills as women are teaching and exposing each other to other livelihood pursuits.

Women’s increasing roles as primary income earners has led to a flourishing ‘businesswoman’ identity. This has nurtured a growth in self-esteem and generated some changes in household roles and responsibilities. Some women are, for example, gaining more control of how to spend earnings and their husbands are becoming more involved in household work: “To me, there are changes…we work together as a team at home” (Port Vila central market vendor, 2018). Although this has the potential to transform gender relations, it is not automatic and it can be fleeting.

Women should be at the frontlines, but not without some big changes

Our study shows that despite their critical roles in disaster recovery, women continue to operate in an inequitable system. On top of some women having finances controlled by husbands, we found that women tend to have significantly larger workloads, can have their voices filtered through male managers, and take up stereotypical livelihood activities that can prolong problematic perceptions of female identities (e.g. in terms of the types of jobs a woman can and ‘should’ have, which are usually lower-paying). Therefore, although our findings point to the importance of centring women in disaster recovery efforts, we also warn that that this cannot be done without efforts to improve women’s wellbeing, agency, livelihoods and prospects more generally.

You can read the full paper here.

Rachel Clissold
Rachel Clissold is a Senior Research Assistant at the University of Queensland and is interested in exploring interactions between people and the environment, especially in terms of how diverse groups of people are impacted by and responding to a changing climate.

Ross Westoby
Ross Westoby is a Research Fellow in the Griffith Institute for Tourism at Griffith University, specialising in the intersection between tourism, livelihoods and climate change.