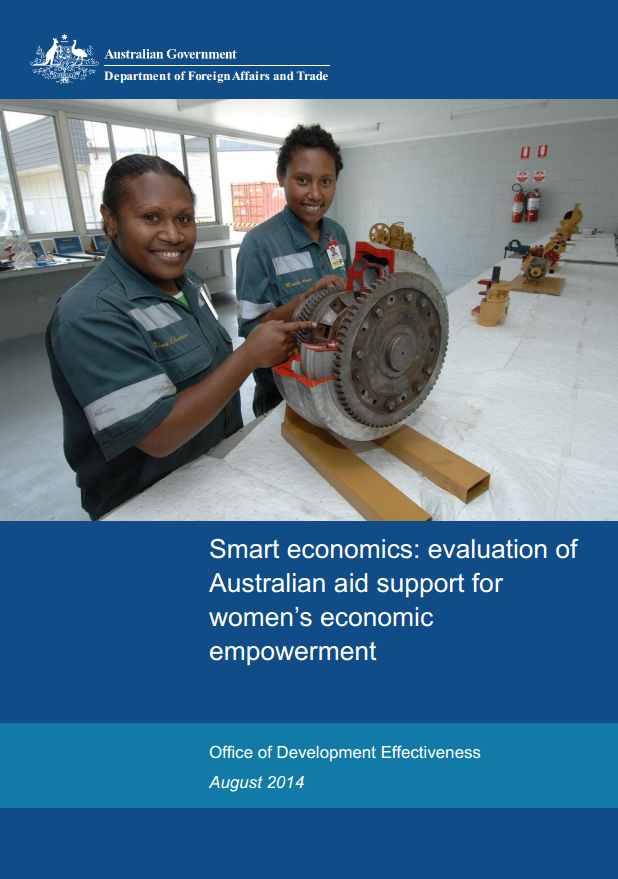 Our aid program will promote the empowerment of women and girls in our region. When women are able to actively participate in the economy, and in community decision-making, everybody benefits.

We will focus in particular on women’s economic empowerment – on promoting women’s leadership in politics, business, communities and families and on eliminating violence against women and children. One of our performance benchmarks is that all of our aid investments must assess gender issues with at least 80 per cent focused on support and empowerment of women.

The ODE evaluation, released last month, brings forward some surprising insights. To give a selective summary:

It’s a very useful report. It gives a large number of good examples of projects which tried to economically empower women, and a few cases that are able to provide evidence of success.

It doesn’t present any cases of failure, either of projects which set out to empower women but failed to do so, or of ones which should have but neglected to empower women in the first place. The report overreaches when it finds that three of the five energy projects assessed did “moderately well” on addressing gender but goes on to criticise the aid program for not providing loans or grants to women to purchase electrical machinery. Really? This is essentially criticising one project for not being another. This kind of logic would mean one would never do anything because one can never do everything.

One confusion this report gives important insight on, though doesn’t resolve, is in relation to the gender target for projects. The Minister’s speech says that 80 per cent of projects should be “focused on support and empowerment of women” (and that “all” should “address gender issues”). If that’s the case, the aid program is in trouble. The report reveals that only 55 per cent of aid projects have gender as a significant or principal objective. The other 45 per cent are not focused on gender equality.

But the actual “performance benchmark” which the Minister refers to (in the benchmark document she was releasing when she gave that speech) says that: “more than 80 per cent of investments, regardless of their objectives, will effectively address gender issues in their implementation.”

The aid program’s performance management system already requires every project to report on its gender progress, and all projects are rated, regardless of whether gender is a focus. In that system, as the ODE report shows, even projects which are not focused on gender can get a satisfactory gender score. Indeed, the report shows that more than two-thirds of projects for which gender is not a focus nevertheless report satisfactory progress against gender. The overall current average “gender satisfactory” rating is 73 per cent, and the ODE report recommends that this be increased to 80 per cent.

If that is all that is meant by the Minister’s commitment, it is not a radical shift. Indeed, once the 80 per cent target is imposed, it would be natural to expect the satisfactory rating scores to lift, subjective as these scores are. Hardly any change would be needed in the gender focus of the aid program itself.

It would be good to have this clarified by DFAT. In particular, the ambiguity whereby a project can be rated satisfactory on gender, and yet not have gender as a focus needs to be addressed. If the Bishop interpretation is to be followed (and she is the Minister) such a project should be given a score of zero. If the benchmark interpretation is followed, it should be given a “N/A” score.

Another tension that the report sheds light on is that between a gender focus and an economic development one. The aid program is meant to have more of each. Yet, as the report shows (see the first bullet), economic projects are much less likely to have a gender focus.

The evaluation makes a large number of recommendations under four headings: increasing resources and building on promising approaches; articulating clear commitments in program strategies and design and economic diplomacy efforts; ensuring adequate staff and sector-specific capacity; and improving monitoring and evaluation in the economic sectors to capture results for women’s empowerment.

DFAT manages both to agree with all the recommendations and to imply that it doesn’t need to change a thing. This is odd, particularly given: that the aid program is being geared up to do more on gender; the emphasis of the report on the importance of gender expertise; and the large number of aid experts who have left since integration. Unfortunately, but not unsurprisingly, the evaluation does not go to the issue of whether this en masse departure will have any bearing on the gender orientation and impact of the aid program.

Ashlee Betteridge is a Research Officer at the Development Policy Centre. Professor Stephen Howes is the Centre’s Director.