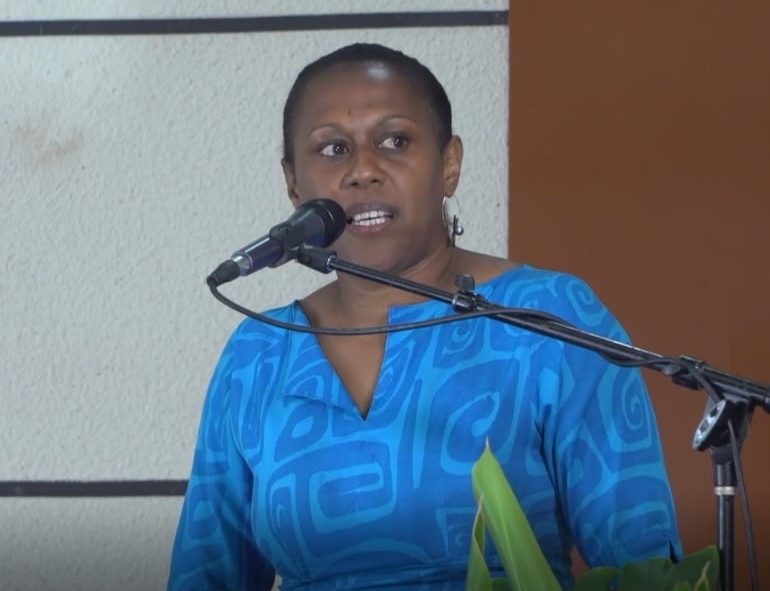 Jennifer Kalpokas Doan is a part of the management team of the Balance of Power Initiative in the Pacific. Her father was a leader of the independence movement in Vanuatu and, following in her father’s footsteps, Jennifer has been a tireless advocate for developmental and inclusive leadership in her country. As part of International Women’s Day celebrations in March, the Vanuatu Broadcasting and Television Corporation invited Jennifer to be part of a public panel on women in leadership. This is her statement translated from Bislama.

One of the many things that we grapple with in today’s modern society is deciding what is socially and culturally acceptable. The Vanuatu that we live in today, our current reality, particularly in the urban areas, is not the Vanuatu that our ancestors and forefathers experienced 100 years ago. If we reflect on how life was in 1921, the things we were exposed to, and what we accepted as the norms that shape what we call our culture – so much looked very different to what we see today.

And then there is individual preference. Our free will to live in line with our own principles and values. And who we choose to associate with in order to be accepted for how we want to live. This is often where there are clashes and conflict. When one person’s wants and needs to live a certain way come into conflict with another person’s, or society’s perceived rules, tensions, fractures and changes arise.

And then there is rural versus urban, along with changes in connectivity and access. With increasing mobile phone technology and access to information, the divide between what we know and don’t know is so much narrower than what it used to be. And that means exposure to other ways of life and new forms of knowledge and understanding, which we can now be so much more easily influenced by.

These things combine to mean that what we accepted to be the norm in 1921 is no longer the way in 2021. The tide that we are riding as human beings in this day and age is constantly changing and growing and, in this moment, as in every moment, we are shaping that. Individuals, churches, chiefs, government, the media – all are part of this change process.

One of the things that is changing is the status of women – the accepted status of women and their roles. I would like us to consider the question of how to be more inclusive and more mature by looking at why our society continues to exclude women in certain areas.

I have used this analogy before. Today we have female surgeons. We have female Boeing aircraft pilots. We have women architects and engineers. All roles which were traditionally male dominated. We have had women in Parliament in Vanuatu – this is not a new thing. But we are not able to consistently maintain elected representation, and perhaps that is because on some level we are still not voting for women because we are not regarding their competence the same way as that of men.

When we go to the hospital, we trust a woman with our lives – to operate on us or have control over our health, and indeed sometimes over whether we live or die. We get on an aircraft and are literally at the mercy of a woman operating a plane, flying through midair. If we can accept that, then it is not a stretch too far to accept a woman, sitting in a chair, under a red roof, making decisions about the welfare of the country – especially when women make up more than half of that country’s population!

For men, our society automatically assigns roles and responsibilities to them and views them as strong and powerful, and therefore naturally assumes they are leaders in a very specific, limited sense of that term. In particular, we might call it the ‘bigman’ system in Melanesia.

So, if women want to also be considered, respected and accepted as leaders, they are already starting from an uneven playing field within that ‘bigman’ conceptualisation of leadership. This means the social acceptance and barriers they have to overcome are so much higher and more difficult.

So, how do women do this? By the demonstration of competent leadership. By our achievements as evidence of our ability to exercise leadership. And as much as we hate to have to admit and conform to it, by our personal actions and behaviour and how we conduct ourselves both publicly and privately. Because a stricter level of scrutiny is being used to assess women than it is for men, whom we just automatically accept as leaders, regardless of all these criteria.

But to take it a step further, women are so often, especially in rural areas, grappling with stronger perceived cultural norms. This means we have to exercise leadership with demonstration of respect to our elders, of our cultural heritage, of church doctrines and rules, and above all, with the greatest humility. We do it by ‘working with the grain’ of the accepted way of doing things – growing and maturing within our own culture – but doing so in ways that influence change from within, rather than thrusting forward an ideology that might be considered western, and therefore foreign and externally imposed.

So much in our lives has already changed. So much of our everyday existence has already adapted to, and accepted, new things. So much of our everyday life is already dependent on global trends and global events. Just take the current pandemic, for instance. It has completely altered all our lives, and we have taken in the good and the bad. But above all, we have taken in what we consider to be the most useful, beneficial and important for our ongoing safety, growth and development. And I am here to say that women in positions of leadership and decision-making, and indeed women in Parliament, is one of those necessary beneficial changes that we need to accept.

Everything takes time. The evolution of our thinking takes time. Changing what we deem ‘acceptable’ takes time. But all that is changing every minute of every day. We can’t stop change. As the younger generation grows up, so much of what we consider new and strange now will become normal in a short period of time. Acceptance of women in leadership has already begun in Vanuatu, evidenced by the ability for women to be elected into parliaments in the past. However, more work still needs to be done to improve that acceptance in a way that will translate to more women being elected going forward. This acceptance will continue to evolve until one day, it will just be entirely ‘normal’.

Jennifer Kalpokas Doan is Director of the multi-country Balance of Power program.