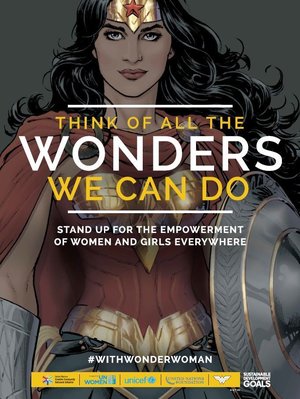 The news recently broke that Antonio Guterres, former prime minister of Portugal and head of the UN’s refugee agency, will be the next Secretary-General of the United Nations, after a UN leadership race that was starting to feel as long as the US presidential race (though the UN race was thankfully, at least most of the time, rather less acerbic).

Another high-profile human resources announcement came hot on the heels of Guterres’ appointment. Last Friday the UN officially launched a new honorary ambassador to champion the cause of women’s empowerment. She’s a globally recognised feminist and queer figure with considerable star power.

Yes, the 75-year-old comic book character. Yes, the one who was created by a man. Yes, the one who came from an all-female nation (what happened to #HeforShe?) designed “to allegorise the safety and security of the home where women thrived”. The fictional character.

The irony of this pick was clearly not lost on The New York Times, whose initial article on the appointment was headlined ‘U.N. picks powerful feminist (Wonder Woman) for visible job (mascot)’. The appointment spurred a barrage of think pieces and op-eds, and has certainly raised the ire of some UN staff, who started an online petition against the appointment and staged a silent protest at the launch.

According to the UN outreach director quoted by the Times, Wonder Woman will appear on the UN’s various social media platforms to spread messages about women’s empowerment, gender-based violence, and other global development issues predominantly affecting women and girls.

All very worthy causes, of course. But the choice of a fictional character to promote them strikes as laughably quirky at best, and downright patronising at worst.

As has previously been noted on this blog and elsewhere, the UN system continues to face very real gender inequality problems. No woman has ever led the UN – despite there being seven impressive female candidates vying for the top job ahead of the most recent appointment – and women remain underrepresented in UN leadership roles. Though it committed to achieving gender parity in senior roles two decades ago, according to a July 2016 staff list just 26% of the UN’s 96 under-secretaries-general were female; at the next level down, 39% (36 of 128) of assistant-secretaries-general were female. In 2015 92% of staff appointed at the most senior (under-secretary-general) level within the UN were men.

If the combined staff in these two senior levels made up a parliament, the UN would rank in 32nd place globally on women’s representation, alongside Costa Rica, Grenada, and Macedonia (Figure 1). Not bad, and ahead of Australia (28.7%) and the US (a dismal 19.4%), but not exactly leading by example. So beyond appointing honorary standard-bearers for the cause of women’s empowerment, the UN could first and foremost focus on empowering more women within its own bureaucracy. 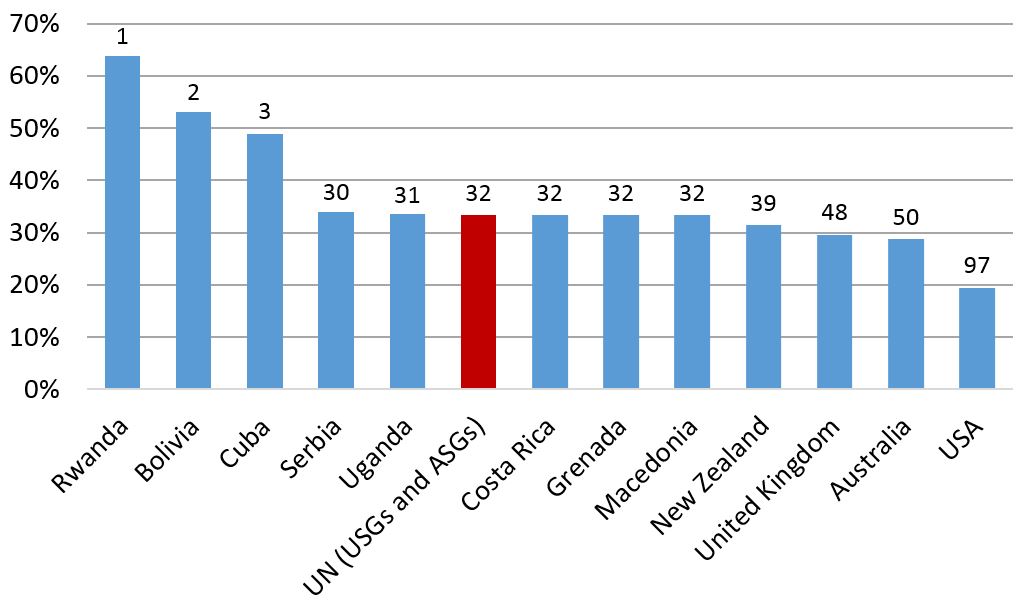 This is not to say that honorary standard-bearers can’t be a valuable tool in the UN’s advocacy arsenal. Celebrity or ‘goodwill ambassadors’, for example, are generally regarded as a useful way of reaching people who are not normally engaged with global development issues. Pop culture and anniversaries can also create good communication products – a successful example from earlier this year was a remake of the Spice Girls’ ‘Wannabe’ on the song’s 20th anniversary to promote SDG5. But the effectiveness of honorary ambassadors depends a lot on a) who they are and b) how they are deployed. Will Wonder Woman’s presence be limited to social media? And how will the messaging tie in with her ethos and story? A new blockbuster Wonder Woman film is set to be released in 2017 – will the actress who portrays her, Gal Gadot, make appearances or advocate on behalf of women and girls? Will there be calls for public participation and engagement, like we saw in the Spice Girls campaign?

This is also not the first time that the UN has turned to fictional characters to raise awareness. Presumably, if the UN is spending time and effort promoting such honorary ambassadorships, any formal evaluations of the impact of Winnie the Pooh, Tinker Bell, or the Red the Angry Bird’s tenures must have been favourable. But equally, the causes that these prior fictional ambassadors represented – International Day of Friendship, children’s environmental awareness, and the International Day of Happiness – seem rather lightweight relative to the issues of women’s empowerment and gender-based violence. If, as has been suggested, the use of celebrity ambassadors can lead to a ‘trivialisation’ of the cause they seek to promote, what effect does employing fictional celebrities as ambassadors have?

Even if deployed effectively, there will always be limits to what celebrity ambassadors, fictional or not, can do and who they can reach. To that end, the choice of a cartoon character as honorary ambassador neglects the many real life ‘wonder women’ and girls who have taken the floor at the UN, taken world leaders to task, and passionately argued for tangible and real change.

At the 1992 Rio Earth Summit, then 12-year-old Severn Cullis-Suzuki of Canada, who had started an environmental organisation with her friends at the age of nine and fundraised to attend the Summit, delivered an impassioned and highly memorable plea to leaders to act on issues of environmental degradation.

In 1995, the hopefully soon-to-be first female president of the United States spoke at the Beijing Conference on Women about the need for gender equality to be something that we must progress together, both women and men.

In recent years, we’ve of course had the inspirational Malala Yousafzai and famous faces like Emma Watson championing gender equality and access to education for girls. (Real life celebrity ambassadors, such as Watson and Angelina Jolie, can speak to the causes they are passionate about and the inequalities that they themselves see – fictional ambassadors perhaps do not have this same power).

And there’s also a growing number of emerging feminist voices from countries around the world finding a platform, such as Aya Chebbi, who spoke at CSW59 last year, and Marshallese poet Kathy Jetnil-Kijiner, who spoke at the 2014 Climate Leaders Summit.

There are also the many, many other women who are yet to have their voices and stories heard on an international stage, but who continue to push for change and make massive contributions to their countries, communities and families – and who may, therefore, have greater reach and more immediate tangibility within their countries and cultures than Wonder Woman will. Unlike Wonder Woman, they’ve also come from the real world where men and women co-exist, and where structural gender inequalities persist.

It’s 2016. Gender equality shouldn’t need to draw on fictional characters to find a message. If Wonder Woman can attract some attention to gender equality among the noise (and abuse) online, perhaps that’s OK, but the real women of the real world need real power — not just a superhuman mascot to cheer for them.