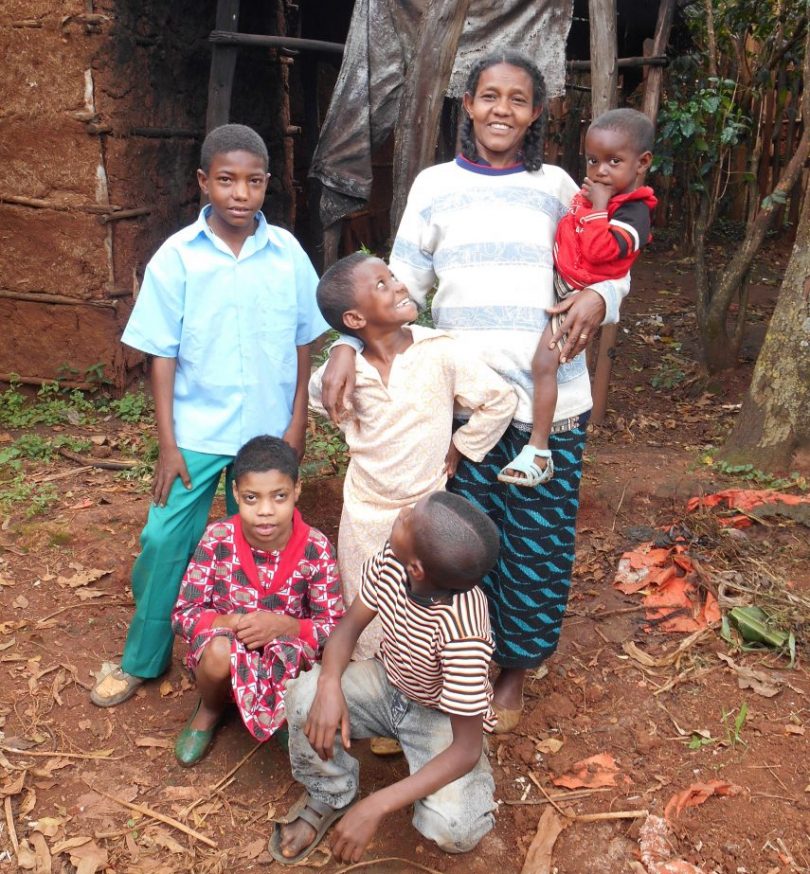 Sara and her children (Ruth Jackson)

You insisted I visit your house for tea.

You walked up the steep hillside to the road the moment I was walking past. There was a large bundle of washing on your back.

You greeted me in English. English! How did you learn English in this Amharic and Sidama-speaking part of Ethiopia?

By going to school and finishing Grade 12.

Why was I so surprised?

Because I didn’t expect anyone to speak to me in English? Certainly. Your English was as good as my Amharic.

I’d walked to the edge of town and was walking back along the main stone-cobbled street in Aleta Wondo, Sidama Zone, Southern Nations Nationalities and People’s Region, Ethiopia. Crowded rectangular houses of mud, many painted seafoam green with rusting corrugated roofs lined both sides of the road. From a distance, all the spaces between the houses, tree-filled. Flame trees with bright red flowers commonly known as Dire Dawa zaf or ‘Tree of Dire Dawa’ as the streets of faraway Dire Dawa are lined with jacarandas and flamboyant trees (Delonix regia). Eucalypts and other trees I didn’t know. And enset (Ensete ventricosum), a large, thick, single-stemmed banana-like plant widely used in southern Ethiopia as a source of carbohydrate from the false stem (pseudostem) and an underground bulb or corm.

You invited me to your home for tea. You insisted! You sold tea from the front room of the house. People sat on long wooden benches up against the mud-smooth walls. Newspapers and magazine pictures wallpapered the walls. Sweet spice tea in tiny cups and biscot – lumps of fried bread dough that always tasted more than half fat – served in plastic woven baskets on rough wooden tables.

Your children were all there. The youngest, a little girl, almost three (you were still breastfeeding her and she’d been sick a lot), to the eldest who had cerebral palsy and spent most of her time in the bedroom. Five children. And all the visiting neighbour’s children who came to see a ferengi, a foreigner, drinking tea.

On another visit, your second child, a boy of 12, showed me the fuel-efficient charcoal burner he’d made using parts of a bicycle pump and other bits and pieces that he’d found in the street. It had electrical switches and ran on batteries. The two of you had been experimenting with sugarcane waste and cow dung as fuel. (I was thoroughly impressed and quietly suggested that adding plastic bags wasn’t a good idea as the fumes were toxic.)

You were always terribly busy Sara. Sometimes when I visited, the children sold the tea and biscot. Or if you were at home and needed to go somewhere, you would just walk out the door without saying anything to me or the children. You seemed busy with church activities too, but never proselytised.

(I never told you I grew up in Ethiopia and that my parents had been Protestant missionaries in the southwest. And at least once a day I still think about Ethiopia and how the voices of missionaries and evangelists drowned out around the possibility of voices of women like you Sara, women who do not need ‘saving’ or ‘development’.)

You were responsible for 20 orphans who were supported by an Ethiopian non-government organisation that sponsored them to live with relatives or other families. One day I bumped into you in the street and you were going from house to house visiting the children and writing their names on a list so they could get new shoes before the new school term.

You, Sara, were 35. You told me you desperately wanted to do more study. You cannot afford to study, and women at your age don’t normally go to vocational education or university in Ethiopia.

Your energy and skills – I remember thinking you have the potential to be a leader – a great leader in your community – beyond the leadership skills you already exhibit.

Sara, I remember thinking you would make a great Prime Minister for Ethiopia because of your intelligence, agility, selflessness and versatility.

You prioritise your family and community needs over your own. You have the capacity to define your goals and the ability to make many decisions about your own life more than many women I’ve met, but you aren’t able to make the one strategic life choice you desire the most.

There’s nothing stereotypical about you Sara.

I’m sorry that your leadership roles will not lead to better educational opportunities for you.

Organisations like the Malala Fund and the Campaign for Female Education support girls education but I’ve never heard of anyone wanting to support 35-year-old women to further their education.

Actually … I started university study as a mature-age student of 37 and eventually graduated with a PhD 13 years later. My fieldwork on maternal health was in Kafa Zone – the same place where my parents were based when I was a child. Another time, I stayed in the guest house on the hill not far from my childhood home for a month, to take time out from the rest of the world. I’ve written elsewhere that that year felt like the first time I learnt how to live and how to walk – like I was now walking down the main road.

This time, I was in Aleta Wondo to train Health Extension Workers (HEWs) to interview women about maternal health and the barriers they faced to giving birth in health facilities. The first workshop was scheduled the day after I met Sara, and I was feeling apprehensive as I’d never run a workshop like this before. And getting to know HEWs here (and later in three other parts of Ethiopia) was another life-changing experience. HEWs are all female and make up almost half of the entire health workforce.

In Ethiopia, women’s lives have been primarily constructed as mothers and the division of labour in the home is defined along gender lines: even women employed outside the home bear almost all the responsibility for domestic and caring tasks. Traditionally, women also faced cultural constraints on mobility and did not have the same freedom to occupy and move around public spaces that men enjoyed. Nowadays, gender equality and women’s empowerment are explicit objectives in many development projects. For example, some projects are based on the premise that poultry management can easily be combined with other household activities and that women have limited access to other agricultural products in rural areas. Some argue that “the highly gendered cultural and symbolic construction of ‘the farmer’” is reinforced when agricultural extension programs for women only support agricultural activities that are traditionally women’s work such as poultry and backyard vegetable gardening. Others argue that when women raise chickens it enables them an opportunity to direct their own journeys for empowerment, alleviates food insecurity and provides access to cash if unexpected costs appear.

I think there’s truth in both arguments. The HEWs I met were ‘empowered’ like other women in Ethiopia, ‘to take more responsibility for their own health’. At the same time they were ‘dissatisfied with having limited or no opportunities to contribute to planning or decision-making in health service delivery’. HEWs provide 16 health packages to mostly rural communities with an emphasis on reducing high levels of maternal, newborn and child health mortality and morbidity as well as on reducing infections and communicable diseases. But they inhabit a gendered space and place at home and work. There can be unexpected consequences for them that accommodate existing gender inequalities, that are blind to them and that perhaps even generate new forms of exploitation.

Writing this, I recalled an interview with another Ethiopian woman, Abaynesh, many years ago. Before we started, her husband brought a small padlocked bag to where we were sitting outside. He struggled and fumbled nervously to open it. Inside he found a small card which had the date for his wife’s next appointment at Bonga Hospital. After 12 pregnancies they had decided not to have any more children. Every three months, Abaynesh walked almost two hours to the hospital for her Depo-Provera injection rather than go to the nearby health post because she did not have to pay for the syringe at the hospital, only for the Depo-Provera. Because everyone in the family was illiterate – they were too poor to buy uniforms, pens and exercise books for the children to go to school – they did not know how many days were left before the appointment (there were 15 days left).

Education and empowerment. Decision-making and leadership. Every time I return to Ethiopia, I meet women like Sara and Abaynesh, and think about the meanings of the words we use to express changes in ourselves and others, and of these women’s unfinished stories.

Some names have been changed.