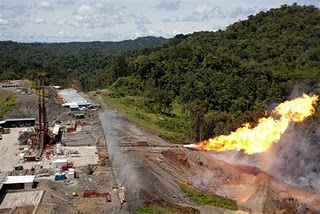 This is a guest post by Russell Hangatt and Clara Momoi of the Department of National Planning and Monitoring in Papua New Guinea.

The Papua New Guinea Development Strategic Plan (PNGDSP) 2010-2030 maps out a path to transform PNG into a middle income country. It answers the questions of “where is PNG now?”, “where do we want it to be in 2030?” and “how will PNG get there?”. This is the first time PNG has taken a long term focus on development planning and is the first time planning has been fully home grown with donors shut out of the formulation of the PNGDSP. It is the first time we see clearly articulated targets – targets that set middle income standards, that are achievable, and that can be monitored. Importantly it aims to transform poverty corridors into economic corridors with the 10 corridors planned for development covering some of the poorest areas of PNG.

The PNGDSP will be implemented through four 5-year medium term development plans (MTDPs) – the first of which is the MTDP 2011-2015. Key to the MTDP is the planning of resource allocation for achieving targets by 2015 that set a pace of progress consistent with the 2030 targets in the PNGDSP. The MTDP 2011-2015 has now been set in motion in the 2011 Budget.

In 1975, PNG, Botswana and Malaysia were at a similar level of development as measured by their GDP per capita (chart 1). Like PNG, Botswana and Malaysia are countries rich in natural resources. However, unlike PNG, these countries have escalated to a higher level with GDP per capita, health and education indicators now at the level of middle income countries. Why not PNG? The answer to this question can be found in the different approaches to development planning. Planning in these countries has been with ambition and aspiration with a long term focus built around long term development strategies and with economic development the key. In PNG, planning has been short run focused, donor dominated, without ambition, and without an economic development focus. The government of PNG has taken a big step forward to come up with the PNGDSP and has now set the scene for a new and unprecedented era of economic development. 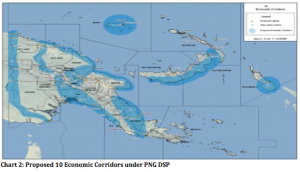 The economic Corridor Concept aims at converting corridors of poverty into economic corridors. The objective is to bring economic prosperity to remote areas of PNG where government and infrastructure services do not reach the people, but are areas that have strong economic potential. As such this concept has been adopted to act as a main vehicle through which the PNGDSP will be implemented to improve the standard of living for the disadvantaged in rural areas of PNG. This will be done by setting a well planned zoning system built around the economic potential of the area, a comprehensive and effective network of transport and utilities, and quality education and health services in regions of the country. Ten Economic Corridors have been identified under the PNGDSP from which the Petroleum Resource Area Economic Corridor (PREAC) along the PNG Liquefied Natural Gas (LNG) project is the first one to be implemented under the PNGDSP. The corridors are highlighted by the blue shaded areas.

The PNGDSP is based on comprehensive analysis including the economic modeling of many strategies and scenarios using the PNG General Equilibrium Model (PNGGEM). The model tells us that the economic impacts on all sectors will be massive under the PNGDSP strategies. The key projected gains far outweigh the costs for implementing this revolutionary plan. GDP will increase from K23 billion to K98 billion, GNI will increase from K20 billion to K73 billion, tax revenue will increase from K6 billion to K33 billion and GDP per capita will increase from K3,700 to K10,000 by 2030. This will create at least 2 million additional jobs. With or without the PNGDSP, the population will expand to over 9 million by 2030. Without jobs, they will be forced to turn to crime and other unfortunate activities just to survive. The PNGDSP will ensure they are either employed, in education, in vocational training or in the informal business sector.

Transport infrastructure in PNG has been poorly managed and maintained. About 2600 kilometres of roads are in poor condition in national, provincial and district levels. This has contributed poorly to service delivery by the government to the 85 per cent of the Papua New Guineans in rural areas. Only 2700 kilometres of roads are in fair condition and another 2700 kilometres are in good condition. The PNGDSP target is to make sure that by 2030 all roads (national, provincial and district) should be in good condition so that there will be an effective and efficient service delivery to the rural majority. In addition, the national road network will be tripled in size to 25,000 kilometres. Airports will be rehabilitated and upgraded to meet international standard to meet the large expansion of tourist and business travel that is expected. The domestic capacity in water transport will be upgraded and expanded to accommodate the rapid expansion in trade envisioned in the PNGDSP as well as an expansion in ferry services.

With 97 per cent of the land in PNG customarily owned, a priority of the PNGDSP is to unlock opportunities for customary land owners to open up their land for development. Under the PNGDSP, 20 per cent of the land is targeted to be converted into bankable assets. Landowners will gain more benefits not only in rentals and royalties but become equity partners without risking one’s traditional land status.

The health sector is one of the key enablers of socio- economic development in PNG in the lifespan of the PNGDSP 2010-2030. There were considerable health gains in the two decades after PNG gained its independence in 1975, but progress in a number of key health indicators such as maternal mortality and infant/child mortality rates have slowed down in the mid 1990s. Thus, PNG aims through PNGDSP at making substantial inroads in health indicators with 2030 targets in line with a middle income country. For example, the under five mortality target for 2030 is below 20 per 1000 live births and the maternal mortality target is below 100 per 100,000 live births. To support these targets, by 2030, 20,000 nurses and 5000 physicians will be employed, hospitals will be upgraded and expanded, and 7500 aid posts will be in place across PNG.

Currently the youth literacy rate is less than 64 per cent and numeracy standards are also poor in PNG due to the majority of school age children not attending schools at the primary and secondary school levels. By 2030, through PNGDSP, PNG aims to increase the net admission rate close to 70 per cent and completion rate to level 8 close to 100 per cent. On the other hand the higher education institutions, including universities and other tertiary institutions, are currently not producing enough skilled people to meet the labour force demand in all sector of the economy as well as to be competitive at the international level. Therefore, over the next 20 years, PNG is aiming at increasing the quality  and capacity of spaces at tertiary levels to achieve 17,500 graduates per year from the current 6500 graduates. This will require a total of 45,000 tertiary spaces in 2030.

According to a number of surveys done in PNG, the law and order problem stands out to be by far the greatest impediment to business and investment – more than infrastructure, governance, regulatory and urban land issues. About 9 per cent of business revenues are consumed by law and order problems. The law and order problem is considered a critical area of concern in the PNGDSP for the overall socio-economic development of the country. The target under the PNGDSP is that by the year 2030, the crime rate will be reduced by 55 percent from the current average victimisation rate of 9.7 per cent. To achieve this, the capacity in law and order services will need to be raised substantially, including a 5-fold increase in the number of police officers to 24,000.

In PNG, the main economic sectors are agriculture, fisheries, forestry, petroleum, mineral, informal sectors, manufacturing and tourism. An overall aim of the PNGDSP is to diversify the economy beyond mining and petroleum by laying the foundations for prosperity in each of these sectors. Agriculture, including downstream processing is the most important sector as it relies on the factors readily available to the people – land and labour. As a result, ambitious targets are set for agriculture with substantial public investments for raising the viability of agriculture. The biggest employer in the economy will continue to be agriculture, but manufacturing and tourism are planned in the PNGDSP to accommodate substantial employment growth. The target for 2030 is for 1.5 million tourists to be visiting PNG each year. The economic impact of achieving the targets for tourism is expected to be K7.3 billion a year, compared with K7.2 billion for agriculture and K5.8 billion for manufacturing. By comparison, the target of 3 gas projects by 2030 will contribute K9.7 billion. In terms of employment, tourism is expected to generate an additional 310,000 jobs by 2030, agriculture an extra 270,000 jobs, manufacturing 180,000 jobs, and mining and petroleum 100,000 jobs.

The PNGDSP incorporates cross cutting issues that cut across all other sectors. Population, youth, gender, HIV/AIDS, vulnerable and disadvantaged groups, environment, climate change, natural disaster management, public sector management, national statistic systems, international relations and security, foreign policy, immigration, foreign aid, and defence and security are all cross cutting issues in the PNGDSP. The important issues are to provide public service machinery within the public service in order to effectively deliver other government services to meet the security of PNG. An important sector to address in general is the population of PNG. In 2000 census, the population reached 5.2 million and was estimated over 6 million in 2009. The productive youth population is currently the main target of HIV/AIDs reduction where the Health Department has recorded that most young people are tested HIV/AIDs. The lack of education opportunities has hampered teaching of  issues such as maternal health and HIV/AIDs.

The collaborative effort by the system of government, development partners, churches and non government organisation is very important and crucial in implementing PNGDSP. That means all their plans and programmes should be aligned to the PNGDSP and MTDPs to achieve the main goal of the PNGDSP. Development partners in particular will be required to align to these plans and so will need strong and decisive leadership in driving the aid program forward to achieve the PNGDSP goals of sustainable economic growth. This will require a substantial reduction in technical assistance whilst continuing to welcome initiatives of development partners to fund PNGDSP and MTDP investments and essential services. Churches will provide effective health, education and community service delivery through a close and sustainable partnership with government and develop strategies for strengthening service delivery through partnership by implementing and further developing the policy framework that guides the partnership between the state and the churches. This will contribute to the goals of the PNGDSP.

Implementation of the PNGDSP requires effective mobilisation of physical and financial resources. This will be done through interventions at sectoral and provincial levels requiring careful scoping to achieve the greatest benefits from the limited available resources. The PNGDSP will require very large amounts of money, but will be self financing to the extent that PNGDSP initiatives will generate tax revenues as a direct result of the expected surge in economic activity. More jobs will result in additional income tax and higher household incomes will lead to higher government revenue in the form of GST. The estimates of both the costs of implementation and revenue earnings indicate that the funding of the PNGDSP will not require a long term expansion in government debt. Furthermore, policy measures can be implemented to deliver efficiencies and greater budget savings. 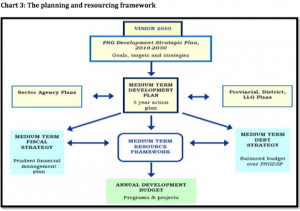 The successful implementation of the PNGDSP depends on whether

How will the Government monitor and evaluate the progress of projects and programmes? There will be two levels for monitoring, reporting and evaluating.