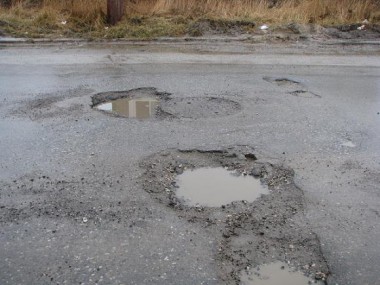 The obvious answer is lack of funding. Governments in developing countries commonly have less financial resources, and have pressing expenditure priorities such as extension of infrastructure into both rural areas and urban squatter settlements.

But governments in developing countries do find the money for new infrastructure projects. In Fiji for example, the government recently upgraded the last unpaved section of the King’s Highway, linking Fiji’s two biggest cities along the northern coastal road (this was done in several stages, with the final stage funded using a loan from Exim Bank Malaysia). In the meantime, the much used Queens Highway, which was originally constructed with donor funds and links the east and west of Viti Levu along the southern coast, is decaying. Many roads in Suva are in worse condition, with potholes everywhere. Why is the government funding new highways while failing to maintain existing roads? The answer cannot solely be about funding.

A more convincing set of arguments relate to the incentives of those in government. This was the argument of Elinor Ostrom (the 2009 Nobel Prize winner), Larry Schroeder and Susan Wynne, in a book they co-authored in 1993. Governments in developing countries, they argued, have political incentives to build new infrastructure; new infrastructure is widely publicised and benefits particular constituencies. The same is not true for maintenance. Maintenance of existing infrastructure – generally built by previous governments – simply does not attract the attention of the media, nor does it win votes.

Similar arguments are made by the World Bank in relation to the Pacific. In the 2006 Pacific Infrastructure Challenge report, the Bank noted that: “In the Pacific, governments have often focused on building new infrastructure, rather than investing in sustainable infrastructure operations and maintenance” (p36). The report argued that donor aid is partially responsible:

“Aid dependence … weakens accountability and risk management. When an infrastructure asset is created with aid money, the normal disciplines of valuing the asset and providing for its replacement in the future can be avoided … making capital free may have contributed to poor governance and poor management over time by removing the pressure to have to pay for valuable assets or provide for their eventual replacement in the absence of donor aid” (p25).

The implication is that aid dependence weakens governance.

The problem is also the result of the way that donors operate. Donors have traditionally funded new infrastructure projects instead of maintenance of existing infrastructure. In part this is due to the view that aid is not permanent. Donor aid for infrastructure is instead provided in order to spur economic growth, often in poor regions, with the idea being that this growth will subsequently be self-sustaining (as will maintenance of infrastructure). In the Pacific, this view of aid has recently been challenged in a discussion note by the World Bank (see this blog for a summary).

How can such problems be addressed?

In all cases, the key to success involves a combination of adequate funding and establishing appropriate incentives for maintenance. Importantly, for private sector involvement to be successful, the government must have the capacity to establish appropriate incentives for private sector stakeholders. This capacity is sometimes lacking in line agencies in the Pacific – as it was in the case of rural electrification in Fiji.

Maintenance can also be incorporated into donor-funded infrastructure projects. This is being done by some donors in the region, and is consistent with the Paris Declaration’s emphasis on improving the capacity of partner government bureaucracies and ensuring that aid generates sustainable results.

Another example of successful integration of maintenance into infrastructure programs is the transport infrastructure schedule to the Papua New Guinea – Australia Partnership for Development, which draws on PNG’s Medium Term Development Plan (2011-15). The schedule states:

“The Governments of Papua New Guinea and Australia acknowledge that, as a general rule, the returns from maintenance and rehabilitation of roads are higher than those from the construction of new roads” (p4).

It subsequently commits the Australia and PNG Governments to rehabilitating key roads in PNG and putting in place systems that will ensure their continued maintenance. No new roads are included in the document, although it does provide scope for “assessment of future transport needs”.

Unfortunately, similar approaches have not yet been adopted by all donors in the region. In one of the least sustainable infrastructure projects in recent years in the Pacific, the Chinese Government provided funding for construction of the US$12.9 million Samoa Aquatic Centre for the Pacific Games – one of only three certified Olympic swimming complexes in the region (the other two are in Australia, New Zealand has none). The centre originally included a statue of a white elephant, although this has since been re-painted yellow. An article in the Samoa Observer two years after the Games laments the fact that no international competitions have since been held in the complex, and observes that the pool is beginning to rust.

Donors clearly need to ensure that maintenance is provided to the physical infrastructure that they finance.