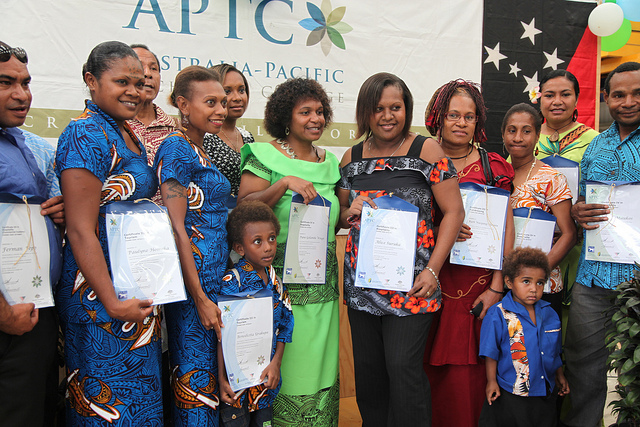 Few countries use their aid program to induce migration from developing countries. The opposite is much more common. There are a myriad of examples, such as the British Government’s 2016 £100 million package announced by Theresa May aimed at preventing Somalis from leaving their country.

The Australia-Pacific Technical College (APTC) is an exception. Launched in 2007, the Australian-aid-funded APTC has had from the start two goals: to develop skills and promote labour mobility. Today the APTC offers a total of 33 qualifications across 14 Pacific countries. Over its lifetime, it has graduated some 10,000 students.

Whatever APTC has done in terms of improving skills, it has not promoted labour mobility. As observed by Michael Clemens, Colum Graham and Stephen Howes in 2014, APTC graduates had an emigration rate of only 1.5 per cent. The authors found a high demand to emigrate by APTC graduates but significant barriers limiting the supply of migration opportunities.

APTC funding is about to run out, but was always going to be replenished. Whatever its technical merits and deficiencies, it is appreciated by both Australian and regional governments as one of the aid program’s more tangible contributions to development in the region. But would the second phase just carry on from the first, which would mean dropping the unsuccessful labour mobility objective, or would it retain the labour mobility objective, and make changes to achieve it? DFAT’s own APTC evaluation undertaken in 2014 confirmed the findings of the earlier Clemens et al. study regarding poor labour mobility outcomes and questioned whether as a result APTC delivered value for money. It requested that DFAT “clarify its expectations” regarding labour mobility. DFAT responded, equally mildly, that it would consider the issue.

Recent documents from DFAT (a concept note from November 2016 and a PowerPoint presentation from March 2017, both on the same webpage) confirm that this process of consideration has now been resolved, in favour of the latter option.

The labour mobility objective for APTC Phase Two is articulated clearly (as it was the first time round). The first proposed objective is that “APTC’s skills training is demand-led and inclusive.” The second is that “APTC graduates [are] qualified for, and connected to, labour migration pathways.”

Two reforms give hope that the prospects of achieving such an objective will be higher the second time round.

The first departure from Phase One is the creation of two streams or tracks: home-track and away-track. The former group are students who plan to work at home, and the latter “are those with the explicit attention of migrating for work”. This is critical. Most APTC students already have a job and are released by their employer to attend the College. Employers will not release students whom they think will migrate. Away-track students will not be sponsored by employers. More generally, having two tracks will help mitigate concerns about APTC promoting brain drain. With this approach, the College can respond that it is promoting labour mobility with the away-track but that it is also supporting local businesses with the home-track.

The second proposed change is the creation of “labour mobility capability” with the responsibility “for identifying and promoting labour mobility opportunities for Pacific migrants in Australia” and perhaps New Zealand. This facility would “have responsibility for establishing links to employers and facilitating the migration process, including for APTC graduates”. The design leaves it open whether this capability would be developed within APTC or not (the suggestion is not), but that is a secondary issue. In the first phase of APTC, it became obvious that promoting labour mobility involved a lot more than providing Pacific islanders with Australian qualifications. It required providing students with information about Australia’s complex migration rules and, most importantly, linking them with Australian employers and providing them with Australian work experience. APTC did none of that: now it will, or someone will for it.

These are welcome changes. But the challenges should not be underestimated. This project is literally a world first. Michael Clemens has argued for “global skills partnerships”, but as far as we are aware APTC is the only prospective one.

In APTC Phase Two, Australia has the chance not only to deliver massive benefits through labour mobility to the Pacific but to be a world leader.

Professor Stephen Howes is the Director of the Development Policy Centre. Last year, he served as a member of the Reference Group established by DFAT last year in relation to the design of the second phase. Henry Sherrell is a Research Officer at the Centre.