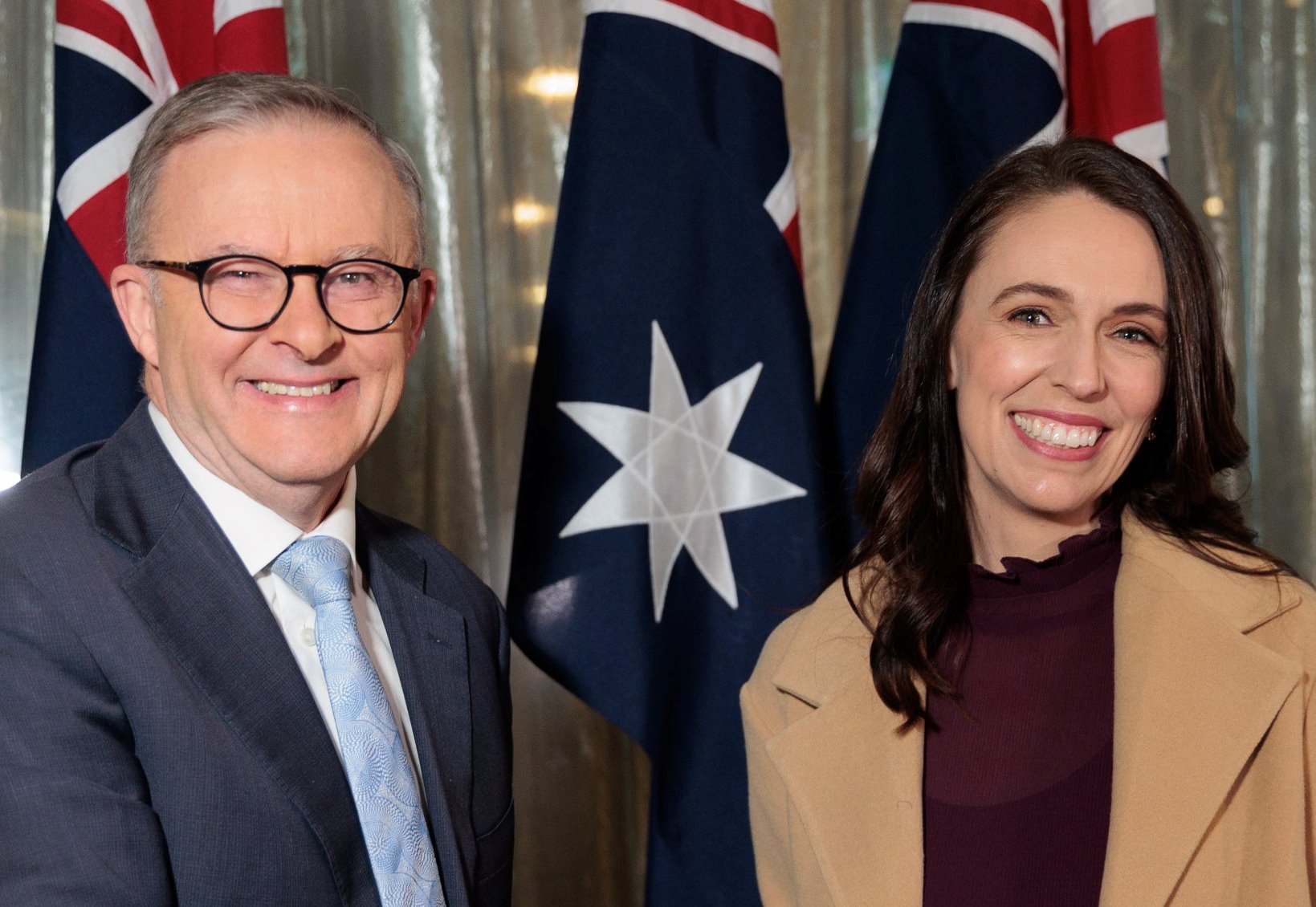 The Australian and New Zealand prime ministers meeting in June 2022

Australia and New Zealand in the Pacific: the difference is migration policy

During her recent visit to Fiji, new Foreign Minister Penny Wong announced that the Australian government would create a Pacific Engagement Visa, providing a pathway to permanent residency for Pacific Islanders and their families. The visa, she explained, would be modelled on an existing visa scheme in New Zealand (NZ), the Pacific Access Category Resident Visa.

How does that scheme fit into the bigger picture of Australia’s and NZ’s migration policies vis-à-vis the Pacific? In a recent article, I explored some significant longer term differences between Australia’s and NZ’s Pacific policies that exist alongside the many important similarities of the two Australasian countries’ approaches towards the region.

Arguably, the most pronounced difference between Australia’s and NZ’s Pacific policies concerns migration. Whereas Australia has created special schemes for bringing in seasonal workers from the region, it has shied away from facilitating the permanent migration of Pacific peoples. As a result, Australia’s Pacific population is miniscule.

For historical and constitutional reasons, pathways to permanent residence from the region do, however, exist in NZ, contributing to a very different Pacific population profile on the other side of the Tasman. NZ’s proximity to parts of the Pacific, constitutional commitments to the Cook Islands, Niue and Tokelau, and its sizeable Māori population (originating from the Pacific) underlie NZ’s claim to being not only ‘in’ but ‘of’ the Pacific. Even more importantly, tagata Pasifika (‘Pacific peoples’) constitute the country’s fourth-largest ethnic group, accounting for 8% of the population in 2018. Pasifika are also well represented in parliament in Wellington, especially in the Labour caucus. A substantial domestic constituency for pro-Pacific policies thus exists in NZ.

NZ’s sizeable Pasifika population contrasts with the small size of Australia’s equivalent demographic segment. According to the 2016 census, only around 200,000 people – or less than 1% of Australia’s total population – originate from the Pacific. Interestingly, that group is dominated by Polynesian communities whose members found their way to Australia in most cases via NZ.

Australia’s nearest Melanesian neighbours, Papua New Guinea (PNG), Solomon Islands and Vanuatu, on the other hand, are seriously underrepresented – even though Melanesian countries have a much bigger resident population (around 11 million compared to approximately 600,000 in Polynesia). As James Batley notes, more Australians claimed Cook Islands than PNG ancestry in 2016 – despite PNG’s population being around 500 times larger than that of the Cook Islands.

Different migration pathways underlie Australia’s and NZ’s very different Pacific population profiles. Whereas only slightly more than 2,000 Pacific people lived in NZ in 1945, their number grew to close to 300,000 by 2013. Around 30% of Pasifika at that time were Cook Islanders, Niueans and Tokelauans, enjoying free access to NZ by virtue of their dual citizenship, belonging to the Realm of NZ. As NZ was the former colonial administrator, large numbers of Samoans have also migrated to NZ since the early 20th century. They do not enjoy the right to automatic NZ citizenship, but a preferential migration regime is in place, first set up under the Treaty of Friendship in 1962 at Independence. In 2000, the Samoan Quota Scheme was introduced, under which 1,100 Samoans are annually granted permanent NZ residence. In 2018, around 200,000 people of Samoan descent lived in NZ, making it the largest Samoan diaspora in the world.

Since 1984, Pacific communities in NZ have even had their own ministry: the Ministry for Pacific People. Health and education aside, signature policies driven by Pacific people-related agendas have included NZ’s apology to Samoa for its colonial past, the country’s nuclear-free policy, and the Recognised Seasonal Employer (RSE) scheme.

Easy access for people from the Realm and the Samoan quota aside, there is the above-mentioned Pacific Access Category Resident Visa scheme. This, like the Samoa Access Quota, is essentially a vastly oversubscribed annual visa lottery. Currently 75 Kiribati citizens, 75 Tuvaluans, 250 Tongans and 250 Fijians (plus their partners and young dependants) gain rights to reside in the country, conditional on finding employment. Eligibility for the annual ballot is confined to Pacific people from the named countries aged 18 to 45 years. This ‘US Green Card’-style migrant labour scheme has opened an additional pathway for Pacific Islanders to permanently migrate to NZ.

Finally, since 2007, there has been the RSE scheme which allows NZ’s horticulture and viticulture businesses to recruit workers from nine Pacific island countries (PICs) for seasonal work. The scheme, originally capped at 5,000 places per year, has since grown to 16,000.

In contrast – at least until now – no distinct pathways to permanent residence for Pacific people have existed in Australia. In line with the White Australia policy, most Pacific Islanders working as indentured labourers in Queensland and New South Wales were deported in the early years of the early 20th century: “[I]n an effort to ‘racially purify’ the new Australian nation […]. The Pacific Island Labourers Act of 1901 authorised these deportations and banned further recruitment after 1903.”

The Holt government quietly started to dismantle the White Australia policy in 1966, but parliamentary and cabinet-level discussions in 1966 and 1968 about getting people from the then-administered territory of PNG to Australia led nowhere. Even when the Whitlam government in the early 1970s officially replaced the White Australia policy by a non-discriminatory migration regime, special access to Australia for Pacific workers remained taboo. Graeme Dobell notes that after PNG’s independence in 1975, Australia’s Pacific policy “became about diplomacy, defence and aid – not the people who were the responsibility of [the] newly independent nations [in the region].”

Only in the middle of the new century’s first decade, under the Rudd government, would Australia, faced with pressure from both PICs and domestic farmers, for the first time follow NZ’s lead and start a pilot scheme for up to 2,500 seasonal workers per year from Kiribati, PNG, Tonga and Vanuatu. The scheme was made permanent in 2012 as the Seasonal Worker Program (SWP). The SWP has provided more than 40,000 seasonal jobs to workers from the Pacific and Timor-Leste. Finally, as part of the Pacific Step-up, the Australian government added in 2018 the Pacific Labour Scheme (PLS), open to all PICs, allowing workers from the Pacific to be employed in regional areas for up to four years.

While some 25,000 Pacific workers are now in Australia under the SWP and the PLS, the two schemes remain modest ones in numerical terms, and involve problems in terms of family separation as well as bureaucratic demands on sending countries. Moreover, by not leading to permanent migration pathways, they do nothing to boost the Pacific diaspora in Australia. Repeated recommendations by Australian academics and the World Bank to copy NZ’s residence visa lottery for Pacific Islanders were for a long time not heeded, being dismissed as “too radical” by the government.

Recent parliamentary hearings on Australia’s relationships with PICs again saw suggestions to copy NZ’s lottery scheme. In March 2022, one of these parliamentary committees recommended consideration of the creation of “a dedicated Pacific component within Australia’s permanent migration intake, similar to the New Zealand model.” And now the new Labor government has announced a new Pacific Engagement Visa, precisely along these lines.

The de facto absence of regular permanent migration options has long been a sticking point in Australia’s relations with PICs. Pacific leaders have also not forgotten that Australia has for years used the region as a dumping ground for unwanted refugees, putting them in detention camps in Nauru and on Manus Island under its ‘Pacific Solution’ and ‘Operation Sovereign Borders’ schemes. The new visa for Pacific Islanders will not alleviate all such concerns. However, it constitutes an overdue step in the direction of finally putting people at the centre of Australia’s relations with the Pacific.

This blog draws on the author’s recent article ‘Australia and New Zealand’s Pacific policy: aligned, not alike’ in the journal Political Science.

Patrick Köllner
Patrick Köllner is Vice President of the German Institute for Global and Area Studies (GIGA), Director of the GIGA Institute for Asian Studies, and a Professor of Political Science at the University of Hamburg. In recent years, he has worked intensively on Australia and New Zealand’s policies towards China and the Pacific.