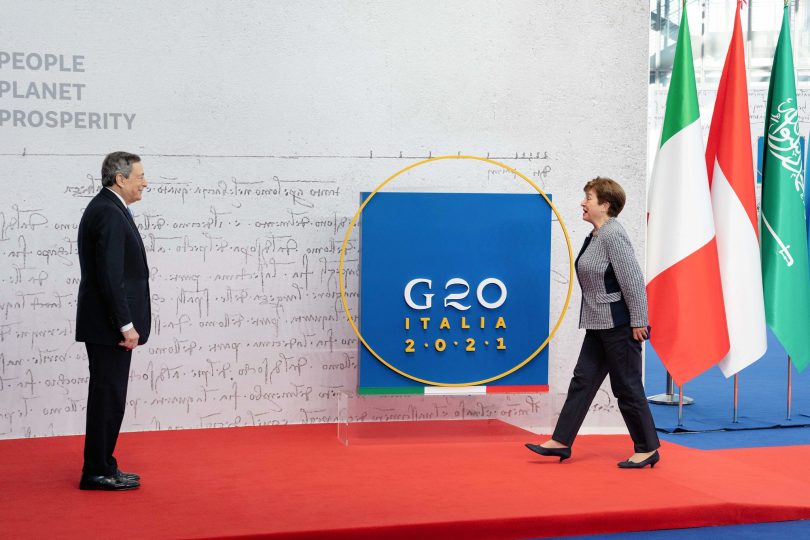 SDRs or Special Drawing Rights are, in layperson’s terms, the currency of the International Monetary Fund (IMF). In August 2021, the IMF issued a general allocation of 456 billion SDRs, equivalent to USD650 billion, to augment member countries’ official reserves and help address liquidity pressures that have arisen in facing the impact of COVID-19. This round of issuance is the largest in the IMF’s history, and more than doubled the issued stock of SDRs (SDR204 billion before the 2021 issuance).

SDRs – see this good explainer from the Reserve Bank of Australia (RBA) – are useful in boosting foreign exchange reserves in the face of balance of payment pressures. The issuance of SDRs at a time of global stress as a result of the pandemic was a good idea, but the problem is that the additional SDRs didn’t necessarily go to the countries who needed them. SDRs are distributed based on countries’ quota shares at the IMF, so high- and upper middle-income countries (based on the World Bank’s 2022 country classifications) received SDR404 billion from the new allocation, or 89%, leaving only SDR52 billion or 11% for low- and lower middle-income countries.

To make the SDR issuance work, there needs to be a redistribution from rich to poor countries. That is why participants at the G20 Summit, held in October, set a target of USD100 billion (about SDR72 billion) worth of SDRs from countries with “strong external positions” to “countries most in need”. It’s a widely agreed goal – but the question is how.

The most obvious option is to lend the SDRs back to the IMF. One IMF vehicle that allows for this is the Poverty Reduction and Growth Trust (PRGT), a lending facility at highly concessional rates, currently interest-free.

The problem with the PRGT is that it is only available to the poorest countries (specifically, 70 countries eligible to access the World Bank’s concessional lending window, the International Development Association). Furthermore, the access of eligible countries to the PRGT resources has an annual limit of 145% of their IMF SDR quota and a cumulative limit of 435%. These limits have already been increased from 100% and 300% respectively in July 2021 and, due to debt sustainability concerns, further increases are unlikely.

The IMF is looking to raise additional funding for the PRGT, a total of SDR15.4 billion up to 2024. But, even if all of that came from the additional SDR allocations, it would only take up about USD21 billion of the USD100 billion G20 redistribution commitment.

A number of G20 countries (Canada, Italy, Spain and UK) have already committed that they will redistribute 20% of their new SDR allocation, but they have all committed only around 5% of their allocations to the PRGT. In comparison Japan has committed 10%.

Alternative disbursement channels are therefore needed, and the IMF is working on a new trust fund, the Resilience and Sustainability Trust (RST), in response to the call in the G20 Rome Leaders’ Declaration. More countries would be able to access this, says the Declaration, not only low-income countries, but also “the African continent, small island developing states, and vulnerable middle-income countries”.

One might ask why the IMF should be involved with themes of resilience and sustainability, given that it was established to deal with balance of payments crises. But the IMF a long time ago moved to assist poor countries more generally. The G20 Declaration says that the new trust will “reduce risks to prospective balance of payments stability, including those stemming from pandemics and climate change”. It’s an odd way to frame these existential challenges, but it helps the IMF manoeuvre within its original, and untouchable, legal mandate.

Theoretically, SDRs could also be channelled via the World Bank or the regional banks – African countries have called for the African Development Bank to act as a conduit – or lent by countries bilaterally. However, SDRs were set up to be a reserve currency, and in some G20 countries this is embedded in legislation. As noted by the European Central Bank, this limits the ability of European countries in particular to pass on the SDRs to another country or, indeed, beyond the IMF. The fact that the G20 resolution specifically noted that the new RST would “preserve the reserve asset characteristics of the SDRs” signals how important this issue is. Whether bilateral or multilateral arrangements could be fashioned is a major uncertainty, and one that suggests that the best way to rechannel the SDRs is by handing them back to the IMF.

Australia was allocated an additional SDR6.3 billion in the August issuance. Of this additional amount, Australia has so far announced it will contribute SDR250 million, about USD350 million (AUD481 million), to the PRGT.

This contribution is a significant increase on Australia’s earlier PRGT commitment (SDR500 million), but only 4% of its additional 2021 allocation. In this regard, Australia is not too different from a number of other G20 nations (Canada, Italy, Spain, UK) which, as mentioned earlier, have also announced new contributions to the PRGT of around 5% of their new SDR allocation.

Where Australia is lagging is that it is yet to make any announcement regarding its intention to meet its fair share of the G20 USD100 billion commitment. As the above four countries have done, Australia should commit to redistributing 20% of its new SDR allocation. After all, as the RBA has pointed out, we don’t need the extra SDRs. Joining the group of G20 countries that have announced that they intend to redistribute 20% of their new allocation will cost us nothing, encourage other G20 countries to follow suit, keep the pressure on the IMF to find new disbursement mechanisms for these additional resources and, ultimately, help with global recovery.

This research was undertaken with the support of The Bill & Melinda Gates Foundation. The views are those of the authors only.