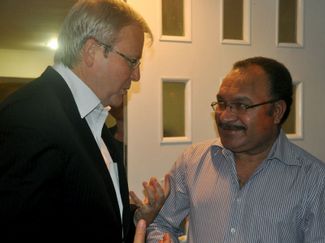 It is an important set of meetings, and not only because our Prime Ministers and Ministers don’t meet nearly often enough. PNG has recently had a change in government, and although it won’t be long before the country goes to the poll next year, the new O’Neill government does have a unique opportunity to get the country back on track after years of increasingly corrupt and paralyzed government under Somare. One of the mistakes made by the previous PNG government was not to make enough of its relationship with Australia. It’s encouraging to see PNG’s new PM come to press his country’s case. (And we’re looking forward to hear him speak at the ANU Wednesday afternoon).

What should be on the agenda for this week’s meetings? Here are my four suggestions, one big and three small.

The big one is that both governments should declare time on the 1999 PNG-Australia Development Cooperation Treaty. As leaders on both sides of the relationship have recently remarked, the PNG-Australia relationship has become much broader than simply an aid one, and it makes no sense for it to be underpinned only by an aid treaty. As the 2010 PNG Aid Review (on which I worked) noted, at the time of independence aid from Australia to PNG and trade between the two countries were about equal; today trade outnumbers aid ten to one.

In fact, our Foreign Ministers (then Smith and Abal) have already agreed (back in July 2010) to “explore an umbrella economic cooperation agreement encompassing development assistance, trade and economic cooperation.” Under that agreement, proposals should have been ready for consideration more than a year ago, but progress seems to have stalled. Now is the time to take the next step. The aim should not be a free-trade agreement. That could come later. For now the model should be something like the 1976 Basic Treaty of Friendship and Cooperation between Australia and Japan. The aim should be a broad statement of principles that the two countries are partners in growth and development, and that they aspire to closer integration.

An agreement along these lines would be an important gesture that the relationship had at last matured beyond that of donor and recipient. But the politics of symbolism can only take you so far. Some practical measures are also needed to move the relationship forward, and to tackle real problems on both sides of the relationship.

The second is the release of the Garnaut-Namilau Report on Higher Education. An initiative of Rudd as PM, jointly launched with Somare in Janaury 2009, this report was completed long ago but has not been released. No one can deny that revitalizing PNG’s higher education system is critical to the country’s future. It won’t be an easy task to implement. Commissioning that report was a good first step, but one which has since been undermined by the inexplicable delay in releasing it.

The third quick win would be an undertaking by Australia to review and relax the visa regulations which currently make it so difficult for anyone from PNG to visit Australia. You only have to go onto Facebook (look for the austpngvisapolicy group) to release how unpopular that is making us, and for no good reason. Our onerous visa restrictions which make it so hard even for PNG citizens to visit their Australian relatives undermine the very goal which our government claims to support – closer ties with PNG and the Pacific – and should be overhauled.

Currently, we are only just scratching the surface of the potential of our special relationship with this country which is closer to us than New Zealand, has a bigger population, and is growing faster. Australia-NZ is the right vision for Australia-PNG. We won’t get there straight away, but we could eventually if we start moving in that direction now, through steps both big and small.

Professor Stephen Howes is Director of the Development Policy Centre at ANU’s Crawford School, and was an author of the 2010 review of Australia’s aid to PNG, commissioned by both governments.