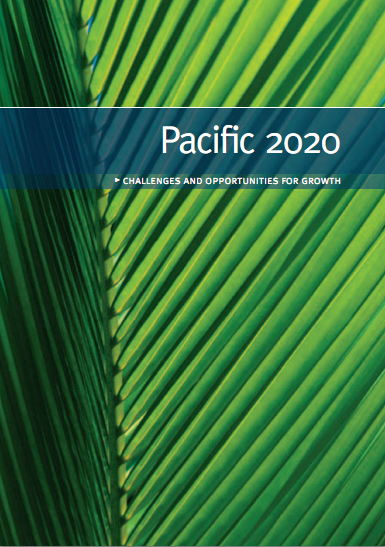 I was the main author of the 2006 AusAID publication Pacific 2020: challenges and opportunities for growth. As the name suggests, Pacific 2020 was an exercise in long-term thinking. What would the Pacific island region look like in 2020? And what could the Pacific do to make 2020 look more enticing?

Today, five years later, we are a third of the way to 2020 from the time the report was written. This blog is not so much about 2020 but about Pacific 2020. Does it look like we got it right? Is the report still relevant? Has it so far stood the test of time? Or have events already moved on?

Pacific 2020 outlined three possible scenarios: good, bad and in-between.  The bad scenario came straight from Pacific 2010, an exercise carried out by a group of ANU academics (led by Helen Hughes) in 1993. This envisaged a “doomsday” of increasing poverty and collapse. The second was a scenario of reasonably rapid growth which we argued all but perhaps the smallest Pacific islands could achieve with the right combination of policy and investments. The third was what we called a “muddling-through” scenario, which was taken from work from my ANU colleague Ron Duncan and AusAID staffer James Gilling.  This recognized that, whatever their problems, many Pacific nations received valuable support from both remittances and aid, and that, while these two sources of funds and employment were no guarantee of prosperity, they would at a minimum keep doomsday at bay.

That was, in my view, one of the most valuable insights in 2020. Many Pacific island countries are muddling through. They are not generating high levels of economic growth, they face serious budget stresses and service delivery problems. But they muddle through. Few collapse. If they do, they will be rescued, as the Solomon Islands has been by the Australia-led regional security mission, RAMSI.

Many of the policy analyses and recommendations in Pacific 2020 are also relevant today. It analyzed a range of areas from mining to forestry, from land to investment, agriculture to tourism. The report grouped together its overall findings under what were informally called the “four I’s”: institutions, infrastructure, integration, and implementation. It delivered some pretty clear messages in relation to these.  Poor institutions were holding growth back, but would only be improved by Pacific leaders themselves nurturing good governance “in a Pacific context rather than treating it as a foreign impost”. Poor infrastructure was a fundamental constraint. Integration and regional cooperation were not options but necessities. And the “single clearest message”: poor implementation was the most serious constraint to successful reform and thus rapid growth.

These conclusions remain valid today. More progress has been made on some challenges than others, with infrastructure probably the positive stand out.

At the same time, I would list five areas as ones where either the region has moved on, or where some rethinking is needed.

The first is the coup in Fiji.  2020 was written in 2006. The Fiji coup was in 2007. There were clearly signs that a coup was a possibility, but 2020 was not the place to speculate about it. Indeed, the report was positive about Fiji’s future and its many opportunities for growth as long as the problem of “political instability” was addressed. This was perhaps overly polite language, but, other than that, the right call. Looking back at Fiji’s meager growth since the coup and the lack of confidence in the economy, Fiji’s coup cycle seems very costly, in terms of both freedom and prosperity.

Second, we missed the resources boom. Pacific 2020 was written on the cusp of the resource boom. It stressed the importance of transparent and prudent management of natural resources, but it didn’t anticipate the extent to which the commodity boom would put both PNG and the Solomon Islands on rapid growth paths, even if there has been little to show for it in terms of benefits to the majority of the population.

Third, we were over-optimistic about the extent to which Pacific island countries could sustain growth. 2020 acknowledged that the smallest Pacific economies might be too small to grow.  But it thought most economies had growth potential, and it highlighted Samoa, Cook Islands and Tuvalu as three economies which had performed well economically in recent years. None has done that well since 2006 — Vanuatu has been the star performer of the non-resource economies since.  One feature of the Pacific economies is simply that they are easily shocked and thrown off course. Growth is even harder in the Pacific to sustain than it is to initiate.

Fourth, we didn’t differentiate enough between countries. Today it makes much less sense to me to think about what the Pacific will look like in 2020 than what, say, PNG will look like then or Polynesia. PNG and Fiji are both of a size that makes them unique in the Pacific, and demanding of separate treatment. Of the other countries, a key distinction is between those that have labour market access to NZ or the US (Samoa, Tonga, Cook Islands and Niue, FSM, Marshall Islands and Palau), and those which do not (Solomon Islands, Vanuatu, Nauru, Kiribati and Tuvalu). It is on this latter group, as well as PNG, because of its size, serious governance problems and high level of poverty, that Australia should focus its aid and development efforts. They are the least likely to be able to muddle through.

Fifth, Pacific 2020 doesn’t say much about what Australia needed to do to deliver a good 2020 for the Pacific. It talked a lot about labour mobility, but, being a government report, was never going to recommend that Australia make it easier for Pacific island countries to access the Australian labour market. Yet there is no more important policy challenge when it comes to the Pacific and efforts made to date by Australia have been meager indeed.

Likewise, as already noted, Pacific 2020 stressed the importance of integration and regionalism. It put a lot of faith in this area on the Pacific Plan, agreed to in 2005 by the Pacific Islands Forum, with strong backing from both Australia and New Zealand. Yet the Pacific Plan has delivered little in the subsequent six years, and the Forum is currently paralyzed by its suspension of Fiji, the regional hub and Forum host. A more pragmatic and bilateral approach to regionalism and economic integration is required today.

Overall, in my (admittedly partial) view, Pacific 2020 got a lot right. What we need now, at least in Australia, is not so much more thinking about what the Pacific island region will look like in 2020 or beyond, and what the Pacific needs to do, but rather more thinking about what Australia needs to do to make 2020 look better for the Pacific. We need to rethink integration, and rethink Pacific regionalism. And, most of all, we need to do more to promote labour mobility.