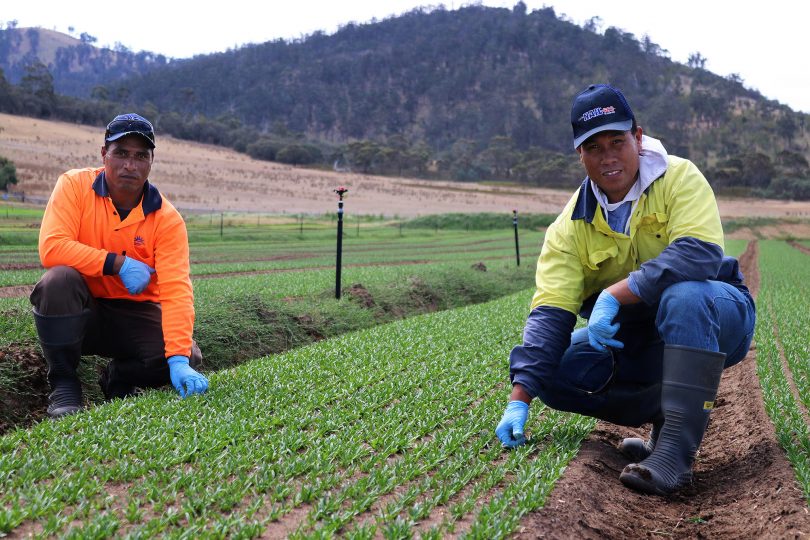 This post examines the practice of blacklisting in seasonal worker programs such as Australia’s Seasonal Worker Program (SWP) and New Zealand’s Recognised Seasonal Employer scheme (RSE). Blacklisting occurs when workers are permanently or temporarily excluded from programs. It can vary from two to five years, or be indefinite, depending on the offence. The practice of blacklisting is rarely highlighted, but should be discussed, as there are implications for all stakeholders. This blog raises these issues in the context of ni-Vanuatu in the RSE scheme.

The main impetus for this post is to highlight what happens when workers are blacklisted, some of the reasons behind this, and how growers are affected when perceived problematic workers are not reported to government labour sending units in future seasons.

Deported seasonal workers are well-documented within labour sending units. Currently in Vanuatu there are 106 workers on the Employment Services Unit (ESU) ban list and a further 1300 on the stand-down list [1]. Although this number may seem alarming, it covers both the RSE scheme and the SWP since 2007. By contrast, inappropriate behaviour by workers is not always documented, and workers are often not penalised.

Blacklisting is a grey area. Although workers have been blacklisted for justifiable reasons, I have also documented cases of when they have not. Tanya Basok wrote extensively on how blacklisting was used as a threat to maintain compliant workers in the Canadian Seasonal Agricultural Workers Program (SAWP). Many of these types of cases have been witnessed within the RSE scheme and SWP, especially the threat of being blacklisted, which is used to ensure thst workers are compliant while participating in the programs. If workers do not follow the rules of the program, or individual employers, then they are penalised through blacklisting: ‘The controlled nature of their recruitment, their fear of losing an opportunity to participate in the employment program, makes workers acquiescent’.

I have noted examples of these threats throughout my research conducted with workers in Australia and New Zealand. Examples include comments such as, ‘If they don’t like it, there are plenty more in the Pacific lined up to take their place’ (anon.); ‘… we just sent these guys to [another] farm because they were working too slowly, so keep the pace or you can be replaced too’; and ‘if you complain you can go home’. Tipples and Rawlinson highlighted an RSE mediation case where the mediator stated, ‘if you don’t go back and work this out, you are in breach of your visa and you all need to go home [and] that broke any resistance to the problem straight away’.

My research (2009, 2014) has highlighted that personality differences and various power relations between workers and their employers or supervisors jeopardise future employment opportunities. Five of my longitudinal RSE research participants have been blacklisted. Three of these were for alcohol abuse and damage to property, but the reason for the other two is more difficult to say as it has been argued that there was no evidence that their behaviours were inappropriate during their visa stays. However there was evidence of personality differences and power struggles between these men and their New Zealand supervisor, who inappropriately used his position of power to threaten the workers. One of these workers asked the Vanuatu ESU why was he blacklisted and was not given a reason.

A noticeable trend mentioned recently by New Zealand’s Deputy High Commissioner in Vanuatu, as well as a number of employers at recent RSE and SWP gatherings, is the number of long-term workers that are being blacklisted:

“I don’t know if that is due to complacency or knowing the system … if it’s the stresses placed on them from multiple visits. I am not too sure, we don’t want issues like this to derail from the positive aspects of the scheme … we can’t let the actions of a few spoil it for everyone … at the same time we have to look at the underlying reasons why issues like that happen” [2].

Control creates resistance and, as mentioned above, long-term workers do show some complacency to regulations. Even though workers accept the conditions of their employment contracts, and have various forms of coping with the restrictions, they do sometimes resist, but not usually in ways in which they will be removed from the program.

After being blacklisted from one scheme, many workers try their luck in entering the other. This is concerning for both the sending countries and, more importantly, the employer. Recently I had a conversation with an SWP employer who had concerns about a worker from a Pacific country because rumours were circulating that he had been blacklisted from the RSE scheme for inappropriate conduct. Enquiries with New Zealand’s RSE manager confirmed the rumours, yet the labour sending unit of that country was not aware of the issue with this particular worker. This is not an isolated case. It can be difficult for labour sending units to know if an applicant has been blacklisted as often they will change their name in order to seek another opportunity. I have documented this on a number of occasions.

The Vanuatu ESU requires team leaders to report back in regards to workers’ behaviours. As discussed in a previous DPA In Brief, this debriefing process needs to be improved, as it can lead to further problems with future employers when non-compliant workers are not reported. Another difficulty is that often employers remove workers from their own list, but don’t report them. Reasons for this include employers not having time for reporting, or their reliance on team leaders to do so. As a consideration to other growers, employers should take the time to report workers that have been a problem for them, not just move the problem worker to another employer. Nonetheless, to ensure their continued participation in the scheme, the Vanuatu government has clearly demonstrated that the practice of blacklisting will be used to punish those that do not comply with the schemes’ or their own regulations and expectations.

Strengthening application processes for these schemes is paramount not only for the reputation of the labour sending country but also for maintaining the supply of reliable, honest workers to growers. Reporting templates for employers and team leaders – on workers who have either not worked satisfactorily or have conducted themselves inappropriately during their time – should be mandatory. These reports should be given to sending units to manage and monitor workers. Workers should also have rights to discuss any reports made against them with the labour sending units, with a mediator if appropriate. With an increased number of workers entering into the RSE scheme and SWP, safety systems should be in place so that workers and employers can be confident of positive outcomes from participation in and management of these schemes.

This post was originally published as Department of Pacific Affairs (DPA) in brief 2018/15.

[1] Data provided by Julie Reedman, Vanuatu Employment Service. 9 April 2018. The ban list prevents workers from returning, whereas the stand-down list prevents them from doing so for a limited period of time. In 2017, Vanuatu sent approximately 6500 workers to these seasonal worker programs.