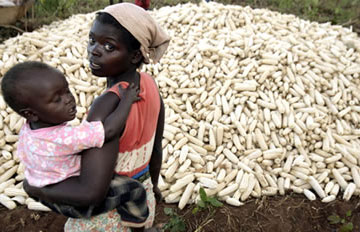 A new paper shows reason for optimism about the role social networks can play in spreading sustainable agricultural practices.

Peer influence channelled through social networks is profuse, and in recent years its power has become apparent through online networking tools. Our contacts on Facebook and Twitter influence what mutual funds we choose, how we learn about job opportunities, where our children go to school, and whether our doctors prescribe certain drugs for us. With such opportunity for influence, marketers are trying to understand how these networks operate and who has the most sway (is it the person with the most friends, early adopters, someone’s boss?). By answering similar questions, the power of peer influence can be successfully harnessed through offline social networks, which can then serve as cost-effective tools in development, where we are often looking to widely spread information using finite resources.

For example, social networks have the potential to aid in spreading sustainable agricultural practices in sub-Saharan Africa, where poverty, low yields, and unsustainable practices often go hand-in-hand. We know that African farmers learn from one another’s experiences (as do farmers all over the world), but can they be encouraged to proactively teach one another about beneficial farming practices? Such social learning would involve relatively low costs, raising the effectiveness of each dollar spent disseminating these practices. Yet few interventions to date have been able to effectively use social networks to help achieve their end goals.

To look at how agricultural interventions could more effectively leverage social networks, my colleague, Mushfiq Mobarak, and I recently conducted a field experiment in Malawi which explored two specific issues: using incentives to encourage communication and the importance of the identity of the communicators. In Malawi, most families subsist on diets of little more than maize, yet average maize yields are paltry. These farming families till their soils heavily and apply very little materials to replenish the soil’s nutrients. Using practices like planting seeds in shallow pits to conserve water or applying compost would likely improve these families’ consumption in both the short- and long-term. These practices are not new, yet very few farmers know much about them and even fewer use them.

Working together with the Malawian Ministry of Agriculture and Food Security, we provided information about beneficial farming practices to farmers in a random set of villages. In some of these villages, we also offered the initial farmers that we educated performance incentives: if they could increase knowledge about these practices or their adoption by 20% within 1-2 years, they would receive fertilizer or bags of legume seeds. In a random set of control villages, we introduced no information on these practices.

We were also looking at the importance of the identity and social position of the initially educated individuals on the spread of information and its adoption. We suspected that one reason few efforts to use social learning in agriculture had succeeded was that they typically worked with farmers who were better educated, more experienced, and had many links with others in their communities. Although these farmers seem like the best candidates for spreading information, they may in fact be seen as less comparable by others in their villages—and thus not induce much adoption. We thus experimented with different types of initial farmers: in a random set of villages, we introduced the information to “lead” farmers (similar to those in prior studies). In other villages, we provided the information to a group of five “peer” farmers who were selected in a village-wide meeting and were more representative of the average farmer in many respects. For comparison, in some villages we provided the information to the Ministry of Agriculture’s extension staff and allowed them to spread this information themselves (without the benefit of partner farmers).

Returning to these villages two years later, we found considerable evidence that knowledge of pit planting and composting had indeed spread and that there was some increase in their use. Comparing our various methods of dissemination, we found a repeated pattern: Peer farmers who were provided with performance incentives consistently outperformed others. These peer farmers raised adoption of pit planting in their villages from <1% to 10% of farms and doubled the use of composting. (Lead farmers and extension officers alone also raised the usage of these practices, but only by about half as much.) Interestingly, peer farmers only succeeded when provided with incentives: we saw no changes in usage of the practices in their villages without these incentives.

Why did peer farmers succeed? Was it because they were somewhat poorer and therefore more motivated by the incentives? Comparing peer farmers at different poverty levels, we saw no differences in performance. Was it because they were working in groups, so had less ground to cover? Comparing peer farmers in very large villages to lead farmers in smaller ones, we still saw peer farmers performing significantly better. Was it because their farms were more similar to those of other farmers? This seemed to be the best fitting explanation—one predicted by a relatively simple theory of learning, where proximity or similarity in two people’s initial conditions shapes how much one learns from the other. Those peer farmers whose farms were seen as most comparable by others in their villages (in terms of size and amount of inputs) were those who achieved the largest gains in adoption of the practices when offered incentives.

These results are quite promising, especially when we look at the gains in the maize crops of the farmers in these villages. On average, farmers in villages where incentivized peer farmers first learned about pit planting raised their maize yields by 11%—a sizable gain, implying that the 10% of farmers in these villages who actually adopted the practice likely doubled their maize yields. Partnering with peer farmers to disseminate information thus appears very cost-effective: paying roughly US$17 per family to provide the information, monitor its use, and provide incentives, we observe average gains in maize valued at US$77 per family—a 4.5:1 benefit-cost ratio. These findings suggest that by fine tuning our approach and working with farmers typical of each community (rather than those we may typically think would be influential), we can leverage their influence through their social networks and significantly stretch the impact of our aid dollars.

Ariel BenYishay is a Lecturer in Economics at the University of New South Wales, where he focuses on social learning and community building in Malawi, the Philippines, and other developing countries.

Ariel BenYishay
Ariel BenYishay is a Lecturer in Economics at the University of New South Wales, where he focuses on social learning and community building in Malawi, the Philippines, and other developing countries.