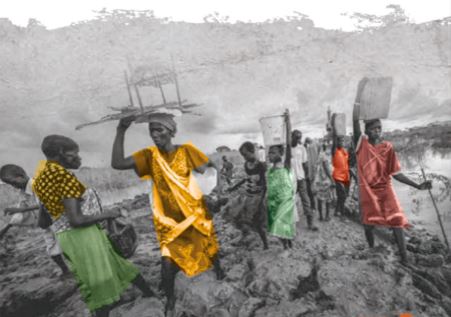 Front cover of 'No Dancing, No Dancing'

He was an angry Ayatollah; an angry anti-United States Ayatollah, and I was the head of a field office of a US NGO funded by the US government.

‘Where do you get your funding from?’ He forcefully enquired through a translator.

It was around 8pm and we had found our way through the narrow streets of old city in the centre of Najaf, stopping a few blocks from where the nephew of the Prophet Mohammad, fourth Caliph and namesake of the Shia, Imam Ali, is buried. Being late 2003, the security situation had already deteriorated in Iraq, and I was visiting ayatollahs in an attempt to explain to them what we did, so that they would then speak on our behalf to their followers. Ayatollah Sheikh Bashir al-Najafi had just accused me of being a CIA spy sent to assess the layout of his compound. Somehow, thankfully, we had managed to move on from that and onto where our money came from.

I began with a very basic overview of the international humanitarian and development industry, ‘…some organisations take money from the Coalition Provisional Authority, some have no experience and come here with little idea of what they are doing, some come to spread the word of the Bible, while others are professional independent organisations that work on the basic needs of people. We are non-religious, we are not-for-profit, and all of us came here voluntarily.’

‘Who is your funder?’ He must have had savvy advisors as he was focused on getting an answer to this question, but at least I had some time to think of a response.

‘We have different donors—average people who donate money by, for example, putting money into tin cans at supermarkets. Secondly, we get money from rich people who, when they die, donate their estate…’

Finally, something in common! I emphasised this point and mentioned it again, hoping that the direction of the conversation would change before I had to explain why we took US government money. I continued, ‘We get money from UNICEF…’

Interrupting again, he stated, ‘UNICEF is a part of the UN. They are not independent, are they?’

At this stage I decided to just get it over with and plough through. ‘We write proposals that we then offer to various donors. We are not government contractors, we include the Iraqi staff when we decide what we want to do, and then we offer a proposal to donors to see if they will give us the money for the project.’ I watched intently as the translation was delivered before adding, ‘One of our donors is the Office of Foreign Disaster Assistance. They are a part of the US government.’

In 2010 and 2011, I decided to go back to the places where I had worked to see what happened to the people and projects. The book No Dancing, No Dancing: Inside the Global Humanitarian Crisis is based upon that journey, following my return visits to Iraq, South Sudan and East Timor.

I visited the angry Ayatollah, who by that stage seemed a lot worldlier in his understanding of the international aid system. I also met hospital administrators, governors, village chiefs, former staff, and most importantly, those who were at the heart of our activities.

In many cases the material output of the projects — wash points, shelters, latrines, and even health centres — had wasted away. In some cases, it was because of a lack of funding for maintenance, in others, the life span had passed or – as in the case of the Eastern Bank in Wau, South Sudan – the neglect was intentional.

The Eastern Bank Camp was established in 1998, and over the years it had developed organically, leaving it with a spaghetti logic to the layout. In 2002, I had helped set up an extensive program that included water wells, wash points, drainage and latrines. We had trained local people to maintain them and reached an agreement with the government to provide spare parts with the support of UNICEF. When I returned, very little was still operational. It was both confounding and heartbreaking.

I wanted to know where we went wrong.

I found Chief Angelo Uraya Dut sitting under a mango tree on a plastic chair. The Chief’s silver beard and faded red baseball cap were all that set him apart from the others who were dressed in a similar style.

With the help of my friend Charles, who was traveling with me, we introduced ourselves.

It took some time to get to the heart of the matter. According to the chief and others sitting alongside him under the wide canopy of the mango tree, the government was intent on taking their land. Wau had grown since the peace and the Eastern Bank Camp was in a prime location. Their fears were that if they improved the land by maintaining the infrastructure then it would become even more attractive for the government.

Looking back at this journey and meetings with people such as the Ayatollah and Chief Angelo, one of the common themes that emerged was that it isn’t just more money that we need, but more time. The contractual constraints, along with expectations of change, force international aid workers to shoehorn projects into timeframes that are too short to see through a situation. The Eastern Bank Camp was supported for as long as the crisis was present because the funding was earmarked for humanitarian purposes, but after that the international community moved on, not knowing of the new challenge the people faced.

The Ayatollah, though, has the time. He is entrenched in his own community, as are the hundreds of staff I had engaged with through the course of a decade of humanitarian work who chose to remain behind long after I had left. It was these people, like the Ayatollah, who are continuing to lead change. People like Osorio who accompanied me on my journey through East Timor had become an advisor to a Minister in East Timor or Nawal, who I reconnected with when visiting Najaf, was at that time a leading female politician in Iraq. Others started businesses or took up senior positions in the government, taking with them ideas that they learned and embraced while working for us.

Despite finding some failed projects, I came away with a sense of optimism, knowing that we had contributed to sustainable change through a focus on empowerment of the staff by providing training and elevating them into decision-making roles.

Similarly, I look back at my engagement with community leaders such as the Ayatollah, and suspect that such conversations had a much more lasting impact than many of the bricks and mortar projects.

Although focusing on staff and building relationships with the community may lack easily measurable outcome indicators, it is through these efforts, and not bricks and mortar projects, that sustainable change will be entrenched.