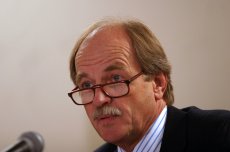 Christiaan (Chrik) Poortman is Chair of the Interim Board of the Construction Sector Transparency Initiative (CoST), the pilot phase of which was launched in 2008. Until recently he was Director of Global Programs at Transparency International (TI). Most of his career was spent at the World Bank: he was Regional Vice President for the Middle East and North Africa when he left the Bank in 2006. Chrik visited Australia in February 2013 to participate in a Griffith University workshop on the governance of international organisations.  Robin Davies was there, and interviewed him about CoST’s objectives and progress.

Robin: What problem is CoST seeking to address?

Chrik: It’s estimated that infrastructure investment will grow to something like $US12 trillion a year toward the end of this decade. It will account for a major part of countries’ public investment programs, some 30 per cent on average. In a business-as-usual scenario, something like 10 to 30 per cent of that money will end up not being spent for the purposes originally intended, for a variety of reasons. One of those could be corruption, but it could just be inefficiencies, mismanagement or what have you.  So there’s very significant scope to achieve savings or, looking at it another way, to improve the efficiency of investment. And that is really the focus of CoST—better value for money in infrastructure investment.

Robin: Tell me about the genesis of CoST.

Chrik: The genesis of CoST really lies with the Department for International Development (DFID) in the UK, who had earlier been instrumental in launching the Extractive Industries Transparency Initiative (EITI). After the launch of EITI, they said, “Look, are there other critical sectors where we could take a similar type of approach?” And they came up with two: public construction and pharmaceuticals. Both were tackled initially through pilot operations, namely CoST and the Medicines Transparency Alliance (MeTA), and both have now moved into full implementation. The general idea is that if you look at the resources that are being absorbed by a sector, and if you can do something to address major resource mis-allocations, you can have a significant impact on an economy. Whether you are talking about developed or developing countries, there is a direct link between investment efficiency and investment growth. So DFID put £4.5 million into the pilot phase of CoST, and the World Bank also provided a great deal of technical support.

Robin: Does it make sense to compartmentalise transparency initiatives by sector, or do you see them ultimately converging?

Chrik: Clearly from the standpoint of an organisation like Transparency International, sector-specific approaches are in a sense sub-optimal. I mean, the eventual goal is to have full transparency and accountability in the economy at large, and in society. So I personally see CoST as a step towards broad-based access to information. It’s not a first-best option, but it’s nevertheless an option to get countries on that track. And hopefully if you’ve done it for extractive industries, and you’ve done it for public construction, then perhaps people will be a little less worried about extending it further.

Robin: Where does CoST work?

Chrik: Eight countries were selected to participate in the pilot phase of CoST. We ended up with a reasonably interesting distribution: four in Africa, two in Asia—Vietnam and the Philippines—one in Latin America—Guatemala—and the UK itself. So we cover four continents and very different political systems and economies. It’s worth emphasising that the UK isn’t just there for best-practice reasons; it’s learning something from the process about costs associated with inefficiency and mismanagement. In fact, the Institute of Civil Engineers and some major construction companies in the UK have actually said that this is something that they want to see taken much further. Having the UK involved is also important if we want to be able to talk to countries like Mexico and Brazil, as  the UK experience is most relevant to them.

Robin: How does CoST actually work at the country level?

Chrik: Well, the best way in which I can explain it is that there are two sides to the process. You have a supply of, and a demand for, information. On the supply side, CoST promotes disclosure of what we call “material project information”, which covers about 32 categories of information that should be made available on all public construction projects.

CoST also helps to make this information available in a way that is most appropriate for the demand side to use. It has to be made available in a format that stakeholders can easily digest. It’s tailored for particular groups of people through what we call an “assessment process”. Say it relates to a water project; the information has to be related to the broader issues in the water sector that consumers need to be concerned about. This process of manipulating the data in a constructive sense is very important in building effective demand for information. So CoST is about promoting both the disclosure of public infrastructure information, and strengthening the demand side, so that the powers that be are held accountable for what they’re doing.

I should add that the process in each country is managed by a multi-stakeholder group, as in the case of EITI. This is a grouping of the three major stakeholders: the public sector, the private sector and civil society. It’s supported by a secretariat which deals with the day-to-day issues, and is also the main point of contact with the CoST international secretariat. This multi-stakeholder group is basically running the show in each country. Usually one of the stakeholders takes the initiative: in some countries it’s the government, in others it’s the private sector or civil society. Basically it just takes a nucleus of people to come together and say to us, “Look, we’re interested in forming a multi-stakeholder group and starting CoST implementation.” Then we give technical assistance to have that multi-stakeholder group formally set up with a local secretariat that has sufficient capacity. Once that’s in place, information disclosure is usually a gradual process. You start with two or three ministries, and then you expand.

Robin: It’s early days, but can you point to cases in which CoST has had a tangible effect in terms of efficiency or anti-corruption?

Chrik: Yes. At this stage the sample is relatively small, but we do have very specific instances where as a result of the disclosure process, there has been a significant improvement in an already ongoing reform. The implementation of CoST has led, in some countries, to further strengthening of procurement reform processes. In other countries, it has led to existing disclosure requirements being much better enforced and often expanded. It has, across the board, drawn significant attention to time and cost overruns, frequently associated with a particular ministry or department or sector.

There are some projects that have been completely deleted as a result of CoST. For example, a highway project in one country came to the multi-stakeholder group and they asked all sorts of questions about the design being totally “off the shelf”. Similarly, a big bridge project that was very politically inspired in another country was canned. And there were one or two other such cases. We have a paper on success stories on our web site.

The fascinating thing is that if you hear the countries themselves talk about this, they feel pretty proud of what they have achieved. That goes to the higher echelons of government and the private sector. What’s been particularly surprising for us, pleasantly so, is that the private sector has really, really come up in supporting this. They see it as a major way in which they can start to level playing fields. Big construction companies, associations of international contractors and what have you, they have all come out strongly in support of CoST because they see it as a major enhancement of the environment within which they work.

Robin: Now that you’ve moved beyond the pilot phase, what are your priorities for the next few years?

Chrik: There’s one thing that we still haven’t tested out. We have decided to create an index that allows countries to track implementation. Countries will be able to do this themselves. This is not something that is going to be centrally administered, with a view to some kind of conditionality. The primary purpose of the index is to allow countries to see whether they’re making progress or not. We already have this index designed, but we need to experiment with it. We need to finalise this so that we can really start measuring what we want to measure.

Chrik: Yes, but the beauty of it is that, rather than saying, “Oh Malawi is 30 as against the UK’s 80, on a scale of 1 -100”, you can show that Malawi starts at 25 and actually makes pretty rapid progress to, say, 45. That’s by no means perfect, but at least it shows that there is performance progression, which you can measure yourself in real time.

Robin: How far do you intend to expand country participation in CoST?

Chrik: Well, we have the eight original countries, which are now fully implementing countries. Beyond those, our focus is on bringing at least four or five countries on board every year. We want to see whether we can bring some of the G20 emerging economies on board, and at least one more OECD country, whether or not they are part of the G20. My own country, the Netherlands, for example. And we have a fair number of countries in Central America that have indicated that they’re keen to move, as well as a number of African countries that are knocking on the door.

We would also like to expand further in Asia. Indonesia is a country that we would definitely like to have on board, and we have made initial contact on that. We will need more resources than we currently have in order to establish and sustain engagement with a larger number of countries, but we are only talking about funding in the range of $US2-3 million per year, or something of that magnitude, in the short to medium term.

Robin: The G20 made passing reference to CoST back in 2011, at the Cannes summit. What are your hopes for the Brisbane summit in 2014, in terms of G20 endorsement or implementation of CoST?

Chrik: Ideally, we will see stronger support or commitment, depending on the countries concerned. This is a worthwhile initiative, and G20 members could highlight it, show that they are aware of its benefits, and in some cases say that they have actually seen some of these benefits delivered in their own countries.

This would give us a shot in the arm. I don’t expect too much from the G20 in terms of financial resources. I think it would just be good to have the political support of those countries that are actively implementing or financing CoST. It ticks a whole series of important boxes—anti-corruption, transparency and accountability, allocative efficiency, good public sector management and, ultimately, growth. It is something that, to my mind, is a no-brainer.

Christiaan (Chrik) Poortman is Chair of the Interim Board of the Construction Sector Transparency Initiative (CoST). Robin Davies is Associate Director of the Development Policy Centre.