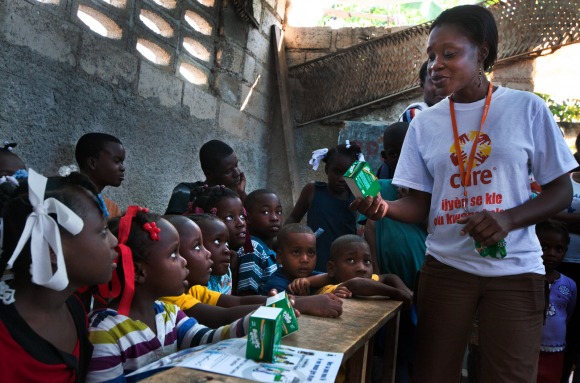 Two years have passed since the major earthquake that devastated Haiti. There have recently been a number of reflections on the adequacy of the international response to the disaster and the problems still facing the country. This Washington Post photo slideshow illustrates the current conditions in Port au Prince.

The relief effort is still ‘severely underfunded’, according to Save the Children, with half a million people living in makeshift tents. Though a camp hosting 20,000 people near the country’s presidential palace will be dismantled soon, officials said.

A cholera outbreak is causing significant problems for the country — and international diplomacy.  Blame for the outbreak has been placed on UN Peacekeepers themselves, as Haiti had not experienced cholera cases for half a century. Despite a scientific study showing the disease spread otherwise, it has still created significant resentment towards the UN presence. The outbreak is being tracked online using social media through a new study.

There is some good news for Haiti, with its addition to the list of countries eligible to participate in the United States H-2 visa program for temporary and seasonal workers. This change, championed by Michael Clemens and colleagues at the Center for Global Development has the potential to give  $400 million of additional income directly to Haitians.

Could the Horn of Africa Famine have been averted?

Why did help in the Horn of Africa arrive so late? Oxfam and Save the Children recently released a report ‘A Dangerous Delay: The cost of late response to early warnings in the 2011 drought in the Horn of Africa’ which addresses the systematic failure of humanitarian aid organisations to raise funds and respond before a crisis receives media attention. The report, which received widespread news coverage, points to early warning systems which forecast a likely emergency in August 2010, nearly a year before the full-scale response was launched.

How aid agencies deal with uncertainty is also addressed:

“Responding on the basis of forecasts instead of hard data requires a shift in dealing with uncertainty. Currently, uncertainty too often stifles action…The principles of risk reduction and management are well accepted in other fields, such as insurance and public vaccination campaigns. These principles must be embedded in short-term emergency response, longer-term development work and government investment programmes.”

You can read a summary of the report on the Oxfam blog.

A team of researchers from Oxford University published an article about the poor quality of anti-malarial medication in Africa. Of particular concern, was the proliferation of fake malaria drugs. Some counterfeit drugs contained a mixture of the wrong pharmaceutical ingredients which would initially alleviate the symptoms of malaria but fail to cure the patient. Some of the counterfeits were also likely to produce severe side effects.

As well as contributing to the 800,000 annual malaria deaths currently, these drugs could be  jeopardising future efforts against malaria by encouraging resistance to the few drugs that are effective against malaria.

Speaking of drug resistance, Indian doctors claimed to have encountered ‘totally untreatable’ Tuberculosis for the first time, but Indian authorities have rejected the claim. WHO mediates.

While it certainly isn’t as flashy as an iPad, the release of a prototype tablet computer by One Laptop Per Child this month has received a fair share of attention in tech and development blogs.  The organisation has already released 2.5 million low cost laptops into developing world classrooms, however the lower power and cost of a tablet could signal the way forward.

The rugged, weatherproof, rubber-cased tablet runs educational games and can be solar powered or recharged with a hand-crank.  The cost of production has not been announced yet as it depends on component costs, however the organisation has said that the price could be as low as $100 per machine.  You can see images of it here.

New fighting broke out in December in the world’s newest country, displacing some 20,000 people and leading to calls for more humanitarian aid. Gunmen burnt thatched huts and looted medical supplies from clinics during a conflict between two tribes. Despite the unrest, the country’s information minister has said that he guarantees the safety of international aid workers.

Given the development challenges the new country faces, some are asking whether it should be a candidate for debt relief . However, Jonathan Glennie argues that it would likely make little difference to development in the country given that current debt is not being serviced.

Development Buzz is our monthly round-up of global development issues and debates.