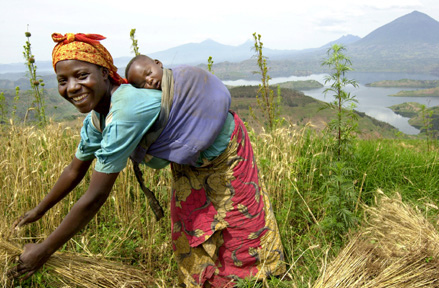 Sunday was World Food Day, bringing the attention of the globe to the crucial challenges of food security, nutrition, food supply and affordability.

The theme of this year’s event was “Food prices — from crisis to stability”. There was also a significant push by civil society organisations for the FAO to put women at the centre of its activities. The day resulted in extensive commentary across the web (as part of the 2011 Blog Action Day on food security).  Here are some of our picks:

World Food Day was perhaps made more salient by the very real food crisis continuing in the Horn of Africa, which is facing the worst drought in 60 years.

The global community has continued its response. Beijing has offered $70 million in support, while the extent of the crisis has even led to Somaliland to bring humanitarian aid to Mogadishu. The Australian government has launched a dollar-for-dollar program to encourage more donations from the public.

These resources are having an impact. However, food assistance has still only reached around half of those in need, according to the UN.

USAID has launched a new interactive web portal, called FWD: Food, War, Drought, exploring the impact of the drought through graphs and maps, encouraging visitors to spread factual information about the crisis through social media.

Those working to assist persons displaced by famine and drought are facing highly challenging environments. Last week, two Spanish aid workers with Medecins Sans Frontieres (MSF) were kidnapped from the Dadaab refugee camp and driven across the Somali border. This will only make the delivery of aid harder as aid agencies can be expected to withdraw international aid workers as a result.

Another humanitarian crisis that is not receiving nearly enough media attention is the monsoonal floods that have ravaged Pakistan. As a result, more than five million people are struggling to survive without adequate food, shelter or water.

The international response thusfar has been slow, with only some 18 percent of the money needed for the flood recovery plan pledged so far by donors. World Food Programme funds for the flood survivors will run out by the end of November, unless more money can be raised. Meanwhile, the death toll has continued to rise.

The Arab Spring uprisings have triggered the European Commission to rethink its plans for delivering aid to developing nations.

The Commission is now planning to focus on human rights and democracy in its aid projects through a form of conditionality — called “good governance and development contracts”. The EU will also reduce the number of countries and regions focused on in the program in the hope of delivering better outcomes.

In other EU news, Britain has announced that it will cut its aid to African countries that persecute gay, lesbian, bisexual and transgender people.

In a win for transparency buffs, policy wonks and data geeks alike, 3ie has recently launched its systematic review database, a virtual treasure trove of synthesised evidence on the impact of development programs.

Opening up access to these systematic reviews across sectors such as health, agriculture and education is intended to provide better information for policymaking in the development space.

A handful of donors are reportedly attempting to dilute or undermine commitments on aid transparency ahead of the 4th High Level Forum on Aid Effectiveness, which will be held in Busan, South Korea, from November 29-December 1.

According to an advocacy email circulated by Publish What You Fund, some donors are attempting to remove all references to the International Aid Transparency Initiative (IATI) from the text, as well as stepping back from time-bound commitments. An online petition is open, calling on donors to commit to transparency measures.

Development bloggers have been reading and responding to the new publication over the past few weeks. Barbara Rodriquez from the Asia Foundation sees the report as an illustration of gender equality as smart economics. Transport analyst Julie Babinard looks at how the report tackles social and physical mobility. Isobel Coleman from the Council on Foreign Relations says the report is valuable, but doesn’t bring forward new points. The report has even got the World Bank’s Chief Economist Justin Yifu Lin, a self-confessed gender skeptic, seeing gender equality as an agent of development rather than a result of economic development.

Could the US slash its foreign aid budget? While budget deliberations continue on Capitol Hill, advocates are pushing for foreign aid to be spared from drastic cuts.  The New York Times has weighed in, with an editorial supporting the work of the State Department and USAID.

A bipartisan report from the Council on Foreign Relations has called for the US to renew its trade and development agenda.

The International Day of Disaster Reduction was marked on October 13, this year with a focus on the role of children and young people in disasters.

Coinciding with this, the Center for Global Development launched a new publication on migration as a tool for disaster recovery, recommending that the US take steps to create a legal channel for people fleeing disasters overseas to be able enter the country.

CNN and Jeffrey Sachs take a look at the difference that mobile phones are making in fighting global poverty, particularly in rural areas.

The CGD has also recently released a publication on the potential for mobile money to change aid distribution and emergency relief for the better.

Meanwhile, in Indonesia, peace activists in Ambon province have tried to quell religious conflict, which had been fuelled by misinformation, by using mobile phones.

Have you read something interesting lately?  Share it with us in the comments section.