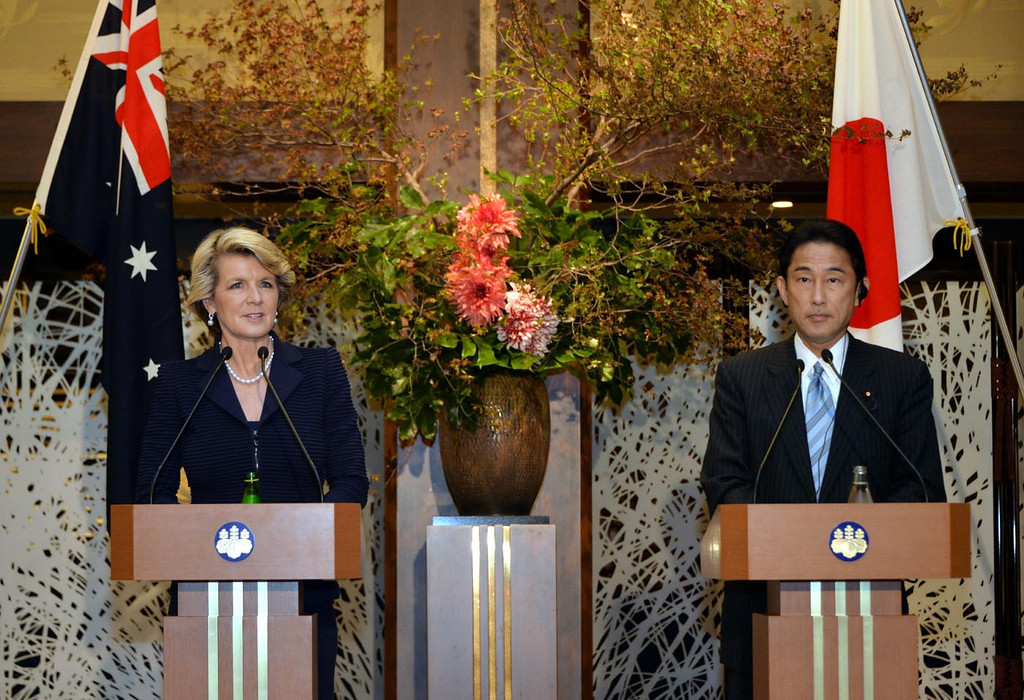 Australian Foreign Minister Julie Bishop has just returned from a seven-day trip to Asia during which, in five public appearances spanning three countries, she didn’t mention Australia’s aid program once. This wasn’t too surprising. Trade, as promised, was the undoubted focal point of this trip, complemented by the announcement-friendly New Colombo Plan initiative. And there were strong incentives for Bishop to stay on-message; the Chinese reaction to a recent US-Australia-Japan joint statement which commented on regional maritime security threatened to overshadow the trip. As it was, Australian media coverage of the trip was focused on the feasibility of the delicate strategic balancing act Australia is attempting to perform with our three biggest trading partners. But for those of us still scouring the tea leaves to get a better sense of the emerging shape of Australia’s aid policy under the Coalition Government, Bishop’s choice of Japan to elaborate on her now-familiar refrain of putting ‘economic diplomacy first’ was significant for a different reason.

Japan, of all the OECD DAC members, has been most consistently explicit about using aid to achieve economic and commercial ends. Between 1992 and 2001 – a period when Japan was the world’s largest donor – traditional donors were particularly unnerved by the ‘Japanese model’ of development assistance. Alan Rix, in his 1993 study of Japan’s foreign aid (recently republished) acknowledged that, “first and foremost, foreign aid is fundamental to Japan’s achieving its foreign policy objectives – regional prosperity and security, global peace and an open international economic system.”

The ‘development first’ philosophy propounded by other DAC members was peripheral to the Japanese approach. Instead, Rix finds, Japan saw development co-operation as an important foreign policy tool, deploying it deliberately to deepen economic and political ties in Asia. Japan stressed non-interference in the affairs of recipient states and promoted a ‘self-help’ approach which emanated from its own national experience.

As Japan’s economic woes in the early 2000s led it to dramatically reduce its aid budget, the ‘China model’ displaced the ‘Japan model’ as the primary source of apprehension for Western development experts. While it is no longer the world’s largest donor – in 2012 it ranked 5th in total aid volume – the principles driving contemporary Japanese development co-operation remain fundamentally the same as the 1990s. In her recent study, Carol Lancaster found that commercial and economic objectives still compete for primacy, trumping development objectives. The most recent DAC peer review of Japanese development co-operation reported that Japan “sees international development co-operation as in its own long-term interests and as an important component of its wider foreign policy.” Japan, the DAC recognised, “wants its aid to benefit the Japanese economy in the medium term.”

In Japan, Bishop outlined Australia’s foreign policy repeatedly. In an address to the Japan National Press Club, Bishop explained that “our foreign policy approach in government will be one that puts economic diplomacy first.” This entails “putting Australia’s international assets, including our foreign policy and our international network, to work for the benefit of Australia’s long-term economic prosperity.” Three days later, in an address to the AustCham Business Breakfast in Seoul, South Korea, Bishop described how “we will place economic diplomacy at the forefront of our foreign policy and by that I mean we will align our international assets, including the work of our diplomats and our representatives overseas to work for Australia’s long-term economic prosperity and the prosperity of our trading partners and that of the region as a whole.” And, just to make sure, in a speech at Sungkyunkwan University, also in Seoul, Bishop confirmed that “Australia’s approach to foreign and trade policy is one that puts economic diplomacy at the heart of our international engagement…[This] means putting our diplomatic assets to the service of our economic interests.”

Three things are clear from these statements. First, we should be under no illusions that Australia’s aid program – whether you think of it as an ‘international asset’, a ‘diplomatic asset’ or a component of our ‘international network’– will not be subservient to Australia’s economic interests. Second, Bishop has a very clear idea of at least the general direction in which she wants to steer Australian foreign policy. Third, it is more likely that Australia’s aid program will come to resemble Japan’s than vice versa.

What remains unclear is exactly how Bishop sees the aid program contributing to Australia’s economic diplomacy. One approach would be to view the aid program as a tool to assist Australian exporters and investors to access and profit from foreign markets. The development impact of such an approach is limited. The better approach is to use the aid program to promote an open trading system and help developing countries to effectively tap into it. Not only does this approach promise greater development impact, it also aligns with steps taken by other donors, builds upon existing achievements and allows Australia to legitimately advocate a future of ‘shared prosperity’.

As numerous commentators have pointed out, Australia is not alone in recalibrating its aid policy. In the present uncertain economic environment and global power dynamics, middle powers are increasingly deploying development assistance in ways that give greater priority to their own economic security than to poverty reduction. The norms underpinning the purposes of aid are shifting as increasing recognition is paid to the many ways wealthy nations can help poorer ones beyond simply providing aid.

The Centre for Global Development’s Commitment to Development Index is an attempt to capture how the behaviour of rich countries affects poor ones. To do so, the index scores rich countries on seven equally weighted linkages: aid, trade, investment, migration, environment, security, and technology. The index ranks Australia second in the trade ‘linkage’, behind only New Zealand. We also score well (4th out of 27) on the investment ‘linkage’, a measure of how our policies “encourage constructive investment in poor countries.” Australia can leverage this credibility by focusing on these issues in our aid program.

With Australia chairing the G20 in 2014, Bishop is also well positioned to influence the G20 development agenda. She could choose an issue to champion, such as labour mobility or trade facilitation or financial regulation or remittances, and actively integrate this with an Australian aid initiative to establish Australia’s thought leadership in this area. (Sue Harris Rimmer has some further suggestions about how Bishop might begin to chart a ‘beyond aid’ agenda here, as does this report [pdf] from the Lowy Institute’s G20 Studies Centre). Australia has an opportunity to insert itself as a broker on an issue that matters to both rich and poor countries.

For now, however, aid has not been adequately coupled to Bishop’s ‘economic diplomacy first’ agenda. In Bishop’s defence, East Asia was not the best place to explain how this relationship would work. Nonetheless, her silence on the matter has served to demonstrate how important it is to begin this discussion.

Benjamin Day (twitter @benjaminsday) is a PhD Candidate in the School of International, Political & Strategic Studies at ANU. He is researching how changes in the international system are effecting how traditional donors use foreign aid as an instrument of foreign policy.

Benjamin Day is an Associate Lecturer in the Department of International Relations at the Coral Bell School of Asia Pacific Affairs, ANU, where his research and teaching focuses on foreign policy decision making, especially around aid policy. Prior to academia, Ben spent a decade working in the development sector.