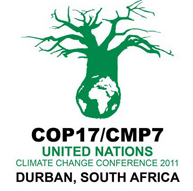 Global climate policy reached a turning point at the 2009 Copenhagen conference. Expectations of a binding global climate treaty were dashed, but instead all major countries made unilateral pledges to cut or restrain their greenhouse gas emissions. That was probably a more significant outcome than a binding, but weak, agreement might have been. What counts is what countries do, not what they sign up to.

The next conference, Cancun 2010, was of value largely because it ratified the 2009 agreement, which, due to the blocking action of a small number of countries, had been noted but not formally agreed to at Copenhagen.

And so the annual climate conference circus rolls on, this year to lovely Durban in South Africa. What should we expect of Durban?

In thinking this through, two points, often-overlooked, need to be kept in mind. The first is that we now have an agreement – forged in Copenhagen, blessed in Cancun – on the way forward for the world to combat climate change. Countries representing 80% of emissions have signed up to emissions control targets; and developed countries have promised billions of assistance to poorer countries for both mitigation and adaptation. There are still details to be worked out (and there always will be), but it is more than the frame which is now in place.

The second is that we now have a way of regularly updating and developing the agreements already in place. For better or for worse, and one can argue the case both ways, the world has decided, at least for the foreseeable future, not to negotiate a new treaty for climate change. Instead, for the time being, it relies on the less formal, but also less binding, approach of relying simply on decisions made at these annual meetings, as they are officially recorded and agreed to by all parties.

One implication of the above two points is that there will be no major breakthrough at Durban – because there is no major breakthrough to be had. Instead, successful annual climate change conferences would be those which enable further detailing of agreements already in place, and, increasingly, reporting back from countries of efforts made to meet their self-imposed targets. It is a process of building confidence and trust.

The expectations of many in the media and some in politics are very different.  There is no shortage of commentators who want to build Durban up, or rather set it up for failure, by saying that it will be a success only if there is a breakthrough.

But that we should not expect a breakthrough, and should not require one in order to judge Durban as a success, does not mean that Durban cannot fail.

The progress described above over the last few years has only been possible because disagreements on other issues have been set aside. In particular, there is a fault-line in the negotiations between those that want to see a second commitment period for the Kyoto Protocol (a so-called Kyoto II), and those that don’t. Since the first commitment period (that is, the first period in which countries commit to reduce their emissions) expires in 2012, this issue is pressing.

Those that want to see a second commitment period are the developing countries, including the powerful BASIC group of Brazil, South Africa, India and China. They view the Protocol as the cornerstone of international action of climate change, which should be sustained rather than allowed to fade away.

Those who disagree are largely those to whom the first commitment period applied, namely the rich countries. The US has never ratified Kyoto. Canada, Japan and Russia did, but have already declared they won’t take on a second commitment period. That leaves Europe, Australia and NZ. They haven’t ruled out signing on, but their support is conditional on other major emitters also promising to take on legally binding commitments. There is no sign of this happening.

EU climate commissioner Connie Hedegaard stated recently: “Some seem to think that if only Europe took a second commitment period, that would make Durban a big success. The world should not fool itself. It’s only interesting to keep Kyoto alive if somebody is following. Europe represents only 11% of global emissions. What will the other 89% do?”

That is a pretty clear statement. Europe will only sign onto Kyoto II if other countries follow. By this, the EU means it will sign Kyoto if other countries agree to sign on to a similarly binding agreement in later years, say by 2015 or 2020. But there is no sign that either the US or the BASIC countries are willing to make such a commitment. Moreover, Europe is staring in the face of possible severe recession; there are even fears of Europe breaking apart politically; and, in Germany, the number one environmental topic now is nuclear, not climate.  It seems impossible that the EU would promise to sign on to Kyoto II at this point in time. And without the EU, a Kyoto II simply won’t happen.

China has signalled  preparedness to consider developing country targets to be put on a legal basis at some point in the future. But this is conditional on Kyoto II and on the US taking on legally-binding targets. And whether China is prepared to go beyond domestic laws to a binding international treaty is still unknown.

All in all, there are so many ifs and buts that an agreement on Kyoto II is not a likely scenario, nor is it the outcome by which Durban should be judged.

The real test for Durban is whether the world can continue to entrench and progress its new-found, bottom-up approach to climate change. This does not require a reversion of global effort back to a top-down approach, but it does require avoiding an implosion of negotiations over a disagreement about what to do with Kyoto. Avoiding this will in itself mean success at Durban.

Stephen Howes is the Director of the Development Policy Centre. Frank Jotzo is a Senior Lecturer at the Crawford School of Economics and Government, ANU, and Director for the Centre for Climate Economics and Policy. An earlier version of this article also appeared in The Australian.