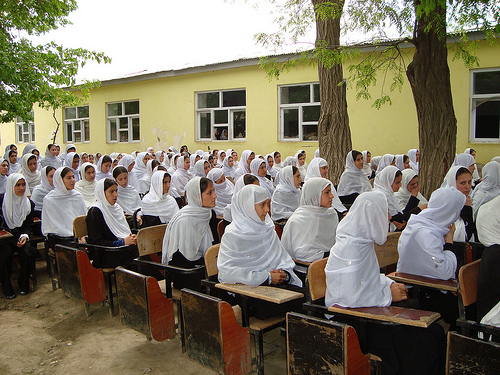 Progress in education in Afghanistan

Other reported achievements include:   community participation in school management; teachers trained in large numbers; tertiary enrolment has increased and tertiary staff increased by 25 percent; new schools built; technical and vocational training established; first-ever IT capacity built; government reforms advanced and a five-year National Education Strategic Plan developed. But how sustainable are these achievements? Like many reports on educational development there is silence on this important issue. And, of course, sustainability of achievements will be influenced by the international troop draw-down in 2014.

A World Bank policy brief shows that the impact of certification on improvements in teacher quality and student learning outcomes is limited. Although certification has led to some changes in teacher behaviour, these have not translated into improved student learning outcomes. Further analytical work needs to be done to assess whether recent changes in the policy program have gone far enough, according to the report.

Despite this criticism, the certification program is to be continued by the Ministry of Education and Culture, according to recent media reports.

Another recent World Bank publication, Teacher reform in Indonesia: The role of politics and evidence- based policymaking, previews a forthcoming World Bank book to be published in early 2013.

In response to concerns about Australian expertise in education and development, AusAID commissioned A baseline study of the current status of engagement of Australian universities and research institutions in education for development. The study was discussed at a Forum hosted by AusAID on 6 November by a group of about 40 people from universities, AusAID, NGOs, ACER and government.

The study, critiqued in this Devpolicy blog post by Robert Cannon, presents an analysis of the current status of Australian universities’ work in education for development and a review of the key issues. It argues for the building of integrative university structures to advance education for development as a field of research and teaching activity and funding over a ten-year period to build capacity in these areas.

The Forum heard presentations from University of Melbourne’s Professor Simon Marginson, co-author of the report, and from Professor Geoff Masters, Chief Executive Officer of the Australian Council for Educational Research. These speakers were joined by Professor Stephen Howes, Director of the Development Policy Centre, and Kaye Schofield, Principal Sectoral Specialist for Education at AusAID, for a final plenary where critical strategies to strengthen university engagement in education for development were proposed for AusAID to consider.

Pearson, a major US education services company, has recently published a report titled The learning curve, lessons in country performance in education. The intention of the report is to further our understanding of what leads to successful educational outcomes. It takes a “naming and shaming” approach to get countries (in particular, Mexico, Brazil and Indonesia) to lift their performance.

The research was conducted by The Economist Intelligence Unit, which may explain its significant weakness– the neglect of serious educational research and the neglect of the processes of learning and teaching. In the one page ‘Select bibliography’, of the 33 references listed, at least 19 either deal with economic issues or have been published in economics journals. Missing is almost any reference to major educational research such as that by John Hattie (here and here). Hattie’s work is based on more than 800 meta-analyses of 50,000 research articles and about 240 million students – surely worth something in a report of this kind, and an answer for the report’s appeal for more research, when clearly much of what exists is being ignored. Reliance on work such as Hattie’s would have given more attention to the processes of learning and teaching, to counter the report’s heavy input–output focus. As  Hattie argues, the greatest source of variance in learning outcomes relates to teachers.

Behavioral design: A new approach to development policy. In the November 2012 Center for Global Development Policy Paper 016, authors Saugato Datta and Sendhil Mullainathan argue that the systematic application of behavioural design should help close the gap between what policy seeks to achieve and what it actually accomplishes. This paper sketches how to use behavioural insights to design better development policy.

The paper draws on development examples from different disciplines, including education, to illustrate the value of considering a behavioural approach. For example, many governments and donors have supported policies involving reducing school fees or providing financial assistance to poor parents as ways of increasing schooling among the poor. However, there is evidence that ‘mental models’, that is, the local underlying theory parents may have about schooling and its costs, can also play an important role in school attendance. These local theories need to be identified, understood and then taken into consideration in education policy development.

NORRAG, the Network for Policy Research, Review and Advice on Education and Training, is a forum for the analysis of international cooperation in the education and training. The NORRAG NEWSBite website has listed a number of new items that discuss educational policy issues including the following:

School leadership in China and Indonesia In a Special Issue, the journal School Effectiveness and School Improvement, Volume 23, Issue 4, 2012, has published several articles of interest to those working in educational development, including: School leadership that makes a difference: international perspectives; National contexts influencing principals’ time use and allocation; Principal leadership in China: an initial review; and Conceptualizing teacher leadership in a Chinese, policy-driven context.

Research database A searchable database of more than 8,000 books, articles, conference papers and reports on various aspects of international and development education from publishers in Australia and abroad is managed by the Australian Council for Educational Research and supported by IDP. The database has been updated recently and is accessible here.

Toilets and schools November 19 was World Toilet Day. This day was intended to raise awareness of some startling statistics about sanitation: 2.5 billion people do not have access to a clean toilet and, daily, 1.1 billion people defecate in the open. The lack of private and clean facilities in schools is known to be a major impediment to girls continuing at school as discussed here in Indonesia, for example. In India, one estimate is that 23 per cent of girls drop out of school when they reach puberty and begin to menstruate—primarily due to inadequate toilet facilities at school.

The Children and Violence Evaluation Challenge Fund This Fund aims at reducing violence against children by funding evaluations of violence prevention and child protection interventions in low and middle-income countries. The Fund has announced its second call for proposals aimed at funding a new set of rigorous evaluations of violence prevention interventions. The deadline for proposals is 17 December 2012.  The physical and psychological abuse of children, including sexual exploitation, is a known – but too infrequently addressed – barrier to the continuing participation of all children and especially girls in education as discussed in this Development Policy Centre blog.

Universities and USAID partnership in development challenges The Higher Education Solutions Network, described here, is a partnership initiative between USAID and seven American and foreign universities. The Network is designed to develop innovative solutions to global development challenges. Universities will establish Development Labs that will work with USAID’s field missions and Washington staff to solve key challenges in development. At the University of California, Berkeley, a $20 million cooperative agreement with USAID will fund a new multidisciplinary laboratory to ready inventions for the developing world, train a new generation of development practitioners and innovators, and to launch a brand new field of research — Development Engineering.

Robert Cannon is an Associate of the Development Policy Centre and Colum Graham is a Researcher in the Centre.

Robert Cannon is a Visiting Fellow with the Development Policy Centre and the Research and Education Advisor at INOVASI – Innovation for Indonesia’s School Children, an Australia-Indonesia Government Partnership, which employs the problem-driven adaptation approach to the challenge of improving educational quality.