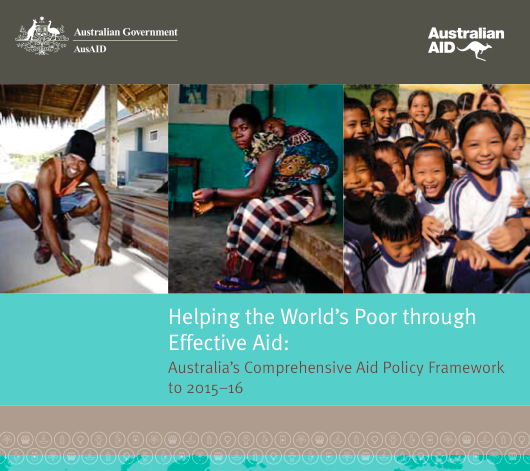 While most attention will be focused on its numbers, the 2012 aid budget was also important for a number of important aid reforms. This brief piece outlines two reforms that should improve accountability and promote a focus on results: the new Independent Evaluation Committee and the new Results Framework.

A key recommendation from the Aid Review was the establishment of an Independent Evaluation Committee to oversee the Office of Development Effectiveness (ODE) in planning, commissioning, managing and disseminating the evaluation program.  On budget night, the Government announced the establishment of the Committee, which will meet four times a year, the first time in June 2012. The Government also announced the membership of the Committee. It will be chaired by Jim Adams, a former Vice President of the World Bank for East Asia and the Pacific, and will include two other independent members –  Professor Patricia Rogers, a leading evaluation expert from RMIT, and Dr Wendy Jarvie at ADFA, and a former Deputy Secretary at DEST – and a senior AusAID representative.  It will produce a report highlighting among other things, the quality of ODE evaluations.

The importance of the committee cannot be understated.  Unlike the Independent Evaluation Groups of the World Bank and the Asian Development Bank, which reports to their Board, ODE reports to the Director-General of AusAID.  The incentive alignments in that relationship are unambiguous; some might suggest a DG would not necessarily want evaluations to show AusAID in a bad light.  An independent committee overseeing major evaluations could make an important difference.

AusAID also released a Results Framework along with the budget.  As anticipated, it includes three tiers to assess effectiveness; (1) progress against the Millennium Development Goals, (2) the contribution of Australian aid to partner country outcomes, and (3) operational and organisational effectiveness.

The first tier is self-explanatory.  The second tier goes one step further and presents headline ‘reach targets’ across its key strategic goals. For example, AusAID hopes to ensure 1 million additional births will be attended by a skilled birth attendant and more than 10 million children will be vaccinated during the next four financial years.  But the devil as always is in the detail – how does attribution work?  AusAID works through partner agencies many of which receive core funds.  Does this mean that all outputs and outcomes generated by these organisations are attributed to AusAID, regardless of AusAID’s financial contribution to those programs?  Hopefully as more details come to light, this issue of attribution will be explained further.

The third tier lists approaches that AusAID is undertaking to deliver aid efficiently and effectively across the headings ‘a clear strategy’, ‘value for money and consolidation’, ‘risk management and performance oversight’, ‘transparency and results’ and ‘Involving the Australian community’.  Some noticeable targets relating to effectiveness are that at least 75% of initiatives given a low quality effectiveness rating will be cancelled or improved within two performance cycles, and that 75% of monitored initiatives will be rated as satisfactory or high quality.

The framework presents a good overview and we look forward to the detail.  I’ve mentioned the need to understand attribution of AusAID funds to partner organisation outcomes; going one step further would involve explaining how ODE and AusAID more generally is using the most rigorous techniques to evaluate programs.  It is one thing to increase evaluations (as ODE says it will do). However if these evaluations are only qualitative and undertaken after program completion, they may not be very rigorous.  Perhaps this is something that can be taken up by the Independent Evaluation Committee.

Dinuk Jayasuriya is a post-doctoral research fellow at the Development Policy Centre. This is part of our series on the 2012 aid budget. The other two parts are available here and here.