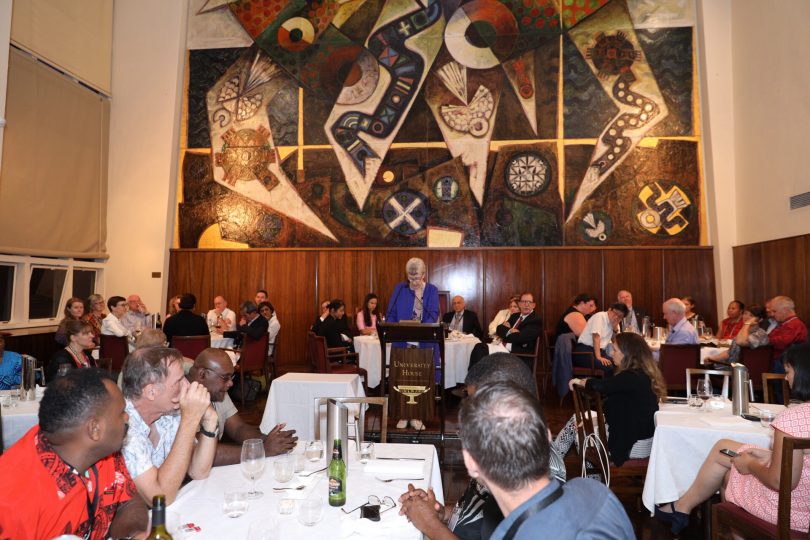 I would like to pay my respects to the Ngunnawal people, the traditional custodians of the land on which we are meeting, and especially to their elders.

I would also like to pay my respects to Harold Mitchell, after whom this Award is named, in recognition of the contributions he has made to development, internationally and in Australia. And finally I would like to thank Cleo Fleming, without whose commitment and excellent writing skills, none of this would have happened.

It is a great honour to be a recipient of this Award. It is a fairly recent innovation, but its awardees have made outstanding contributions to women’s well-being and economic security: the first awardee was Robyn Alders. Anyone who has been in a village in Africa, Asia or the Pacific will understand the importance of her work on Newcastle disease, and also avian flu, to mention just a few of her interests. The second was the Fijian Women’s Crisis Centre whose work on domestic violence and empowerment has touched the lives of countless women, and men, throughout the Pacific.

One of the interesting aspects of this Award is that you can nominate a cause to receive the $10,000 award money. I did not have to think long and hard!

Since 1998 I have been working alongside a Congregation of Catholic Sisters in PNG: the Sisters of Notre Dame. This has helped me learn some of the most important lessons of development.

In 1998 I was appointed Resident Coordinator of the United Nations system in PNG and UNDP Resident Representative. In my first week in PNG, I was fortunate enough to meet Sr Rose Bernard Groth of the Sisters of Notre Dame.

Sr Rose was a Pastoral Worker in Banz Parish in the Western Highlands. In 1985 she read an article in Time Magazine about the devastation the HIV epidemic was causing in Africa. She understood immediately the devastation it could cause in PNG.

The first case of HIV infection was reported in PNG in 1987. Sr Rose started working with and caring for people living with HIV/AIDS (PLWH) when, three years later, in 1990, two of her women parishioners were sick and Sr Rose suspected HIV. They were too ill to go to hospital to be tested so the doctors at Kudjip hospital instructed Sr Rose how to take their blood. Both women were positive. No-one came near them. No-one cared.

The National AIDS Council of PNG was established in 1997. In July 1998, we were both keynote speakers at the first national conference on HIV in PNG. Sr Rose’s presentation was on the patterns of flow of HIV infection from the Western Highlands to the coast and back again. The virus, she argued, moved with the movement of people and, in PNG, spread overwhelmingly through heterosexual sex. She had moved seamlessly from care and concern for people living with HIV, to understanding how and why the virus spreads, that is, to prevention through care and concern.

In 2002, Sr Rose opened the Shalom Care Centre, a two-bedroom house where four people living with HIV, especially newly diagnosed and traumatised women and girls, stay for a week at a time. They are taught about nutrition and healthy eating and how to counter the effects of the virus. Here, people living with HIV can come and have their fears stilled, their despair give way to hope, and their paralysis became empowerment. “I try to give them hope,” she said. “They can live perfectly normal lives. They do not have to die right away. They can have a good life even though they are infected.”

The Shalom Centre was open every other week. In between, Sr Rose went into the village to visit people living with HIV in their homes. She brought medicine and counsel: “We can’t expect them to always come to us. And when we go to the villages, we can see what they will be facing when they go home. I have to have a cover story to protect their confidentiality. I am not exactly incognito in my grey and white habit.” She said with a laugh.

Because of the social isolation and rejection experienced by people living with HIV, she decided to bring them together once every six months with a ‘Celebrate Life’ party: “We decorate it with balloons, serve refreshments, play music, people dance. Each party is for up to 65 people. But six months later, by the time of the next party, 15 to 20 of those 65 people would be dead.”

In late 2007, the PNG Sustainable Development Program began supporting Community Conversations in PNG. Sr Rose immediately understood the value and importance of a community-based methodology to address the HIV epidemic because of her work on tracing flows of infection. Up until then, all HIV prevention, and even care, programs were directed towards individuals.

Three or four year later, Sr Rose decided reluctantly to return to the USA after 48 years in country and Sr Regina, another member of the convent in Banz, took over her HIV work, including the Community Conversations and SEEF programs.

SEEF, often just called Serendipity, is a micro-grant program which funds the education of children of parents who have, or have died of, HIV. It is a magical program which brings meaning, and hope, to the lives of grief-stricken families. Children find a purpose in life. Parents become determined to live as long as possible, so that they can help their children through school, and often university, and into jobs. SEEF helps create a community of mutual support and hope.

By last year, the Sisters of Notre Dame at Banz included among their HIV work: a VCT and ART treatment centre where people can come and be tested and people living with HIV can get their treatment drugs; the Centre currently has over 300 people on ART; the Shalom Care Centre and surrounding vegetable gardens; skills training courses for PLWH who wish to earn some money to support themselves; SEEF; a ‘Celebrate Life’ party on 1 December to bring together families affected by HIV; and a new program for Shalom mothers in which they can come to the Centre on Fridays to be together to share their stories, have fun, tell jokes, have meals together, read the scriptures, do some life skills training, watch some good videos and return back to their villages on Sunday.

The continuing need for such work was born out by a 2018 study which reported HIV infection rates of almost 20 per cent in sex workers in Mt Hagan.

I have tried to sketch for you how these activities and programs have emerged as first Sr Rose and then Sr Regina listened to, and observed, what happens in communities and learnt from people living with HIV in their area.

Much is currently being written on the virtues of Adaptive Management or Doing Development Differently. Adaptive approaches generally apply to work in complex contexts, on complex issues with messy politics. Pathways to change are unpredictable and more conventional approaches have limited effectiveness.

The Sisters of Notre Dame have been managing adaptively in an extremely complex and messy area, namely the highlands of PNG. HIV work places one within a swirling cloud of emotions: fear, anger, distress, shame, despair, vengeance, loathing and blame. One must be able to work within such swirling emotions, to see patterns within them, and to find pathways to quieter spaces, for these emotional states affect people’s ability to think clearly and they shape the ways that they see the world and interact with it.

The Sisters of Notre Dame have no financial support from any development organisation or institution active in PNG. They are mainly supported by small, often one-off, donations from people who are impressed by their work.

What makes this work so effective?

Nuns in general have, I think, been overlooked as a development resource.

When I talk of nuns, I am not referring to faith based organisations, nor to ‘nuns and priests’ or brothers, but to women, women who join a community and take the simple vows of poverty, chastity and obedience.

Despite the impression I may have given, nuns do not function as individuals in the world. They are essentially embedded in a supportive structure, namely, a congregation or order, which can provide both psychological and physical security and possibly some financial and/or human resources.

On the whole, nuns are well educated, better educated that most women in their society. Many of them are trained as teachers or nurses or for working with women. Their work is shaped by the social justice framework, in this case, of the Catholic Church.

Sr Rose and Sr Regina were school teachers before turning to HIV work. They brought a resourcefulness to their HIV work. They also brought the skills necessary to choose goals and to achieve them, including planning, organisation, time management, memory and reflection. These skills are essential to adaptive management.

But, perhaps more importantly, Sr Rose and Sr Regina were knowledgeable about, and had guided and mentored their students in, the skills that guide behaviour, including control of one’s emotions, flexibility and persistence.

The fundamental skill that successful and effective HIV work demands is empathy, that is, knowing what is going on in people’s heads and hearts.

With these skills, Sr Rose and Sr Regina provide an emotional and spiritual enabling environment for reflection, for healing and for action. Within this environment, empowerment occurs, particularly for women, but also for families.

Positive change occurs at the personal level and in their relationships, particularly power relations, in the family and community. At the same time social norms and values which impact on women’s lives are being challenged and changed in the community.

They have also created an enabling environment for accountability, both individual and at the community level. They see virtues as cultivated states of character and set out to strengthen the virtues of gratitude, civility, self-control and self-reflection at the individual level; and the virtues of inclusive reflection, care, compassion and the common good, at the community level.

As Robert Chambers says so eloquently in his most recent book Can we know better? Reflections for development:

What we can do depends on who we are and where we are. Innumerable small acts mount up and reinforce one another. From whatever we and others do, large and small, we can strive to learn and find better ways of knowing and doing. Ideals like equality, justice, well-being and putting the last first will always be there for us to strive towards.

It gives me great pleasure to accept the 2019 Mitchell Humanitarian Award and, through this Award, to be able to recognise and support the work of the Sisters of Notre Dame at Banz, Jiwaka.

This speech was delivered at the 2019 Australasian Aid Conference dinner, Tuesday February 19. For more about Elizabeth and the Mitchell Humanitarian Award, click here. For infection rates among sex-workers in Mt. Hagen see Angela Kelly-Hanku et al. Kauntim mi tu (Count me too), PNG Institute for Medical Research and the Kirby Institute Australia, 2018. Elizabeth drew on the work of Sister Rose Bernard in battling HIV in PNG, read more about Sister Rose’s work and its effectiveness.

Elizabeth Reid AO, FASSA, is an Australian development practitioner, feminist and academic with a distinguished career in and significant contribution to national and international public service. She founded, established and worked with a number of pioneering and specialised United Nations institutions, government agencies and non-governmental organisations. Reid was appointed the world's first advisor on women's affairs to a head of government by the Australian Labor Government of Gough Whitlam in 1973.