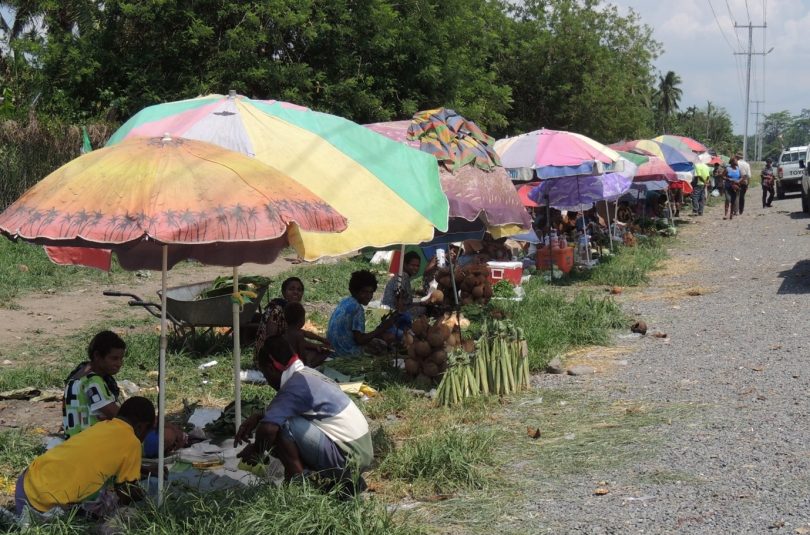 In the mid-afternoon, in an area of West Goroka in Papua New Guinea known as Lopi, women gather in front of the small, run-down trade stores near the rugby league pitch and on the other side of the rutted dirt road. They spread canvas bags and pieces of plastic on the ground, onto which they put small piles of produce they want to sell. Some of this food is grown elsewhere and brought to Goroka in trucks travelling along the Highlands Highway – potatoes from Henganofi to the east, onions from Simbu Province farther west, and betelnut and peanuts from the lowlands in Madang and Morobe provinces. But most of it – including sweet potatoes, greens, bananas, cabbages and corn – is grown by the vendors themselves in small gardens in and around West Goroka.

In the late afternoon, workers returning to their homes in the informal settlements of Council Camp and Banana Block stop to buy household items from the stores and fresh produce from the women sitting in front of the stores, as well as to chew betelnut and chat with their friends.

Similar afternoon scenes are found in more than a dozen small marketplaces around Goroka, on many street corners and at bus stops. These small ‘corner markets’ were essential in 2020 when government officials closed the main Goroka market in an attempt to stop the spread of COVID-19.

Such scenes are also common throughout urban and rural PNG. Selling fresh food in open-air marketplaces is a significant and growing part of the PNG economy, although its importance is often overlooked in official circles and reports. The country’s marketplaces have also changed considerably over the past 60 years, with particularly rapid change occurring in the past 20 years.

This transformation is documented in our recent paper in Asia & the Pacific Policy Studies, in which we review changes in PNG’s fresh food marketplaces between 1961 and 2022. We draw on studies in 20 urban centres, as well as casual observations from many other marketplaces. From the early 1960s to the mid-1980s, there was considerable research on marketplaces. Since then, there have been fewer detailed studies, but the research that exists provides snapshots of particular marketplaces at particular times. In our paper, we compile these snapshots to obtain a picture of significant changes in PNG’s open-air marketplaces – changes that have important implications for social planners and development specialists.

Some of these changes have been spatial and temporal. There has been a significant increase in the number and importance of small marketplaces in both urban and rural areas. Marketplaces have also shifted from operating one or two days each week, often coinciding with government paydays, to most marketplaces now operating six or seven days each week.

There have been changes in what is bought and sold. In the 1960s, almost all of what was sold in marketplaces was locally produced fresh food. But in the early 1970s, imported and manufactured goods were increasingly sold in some marketplaces, and now sometimes represent a high proportion of goods sold.

There has also been a shift in the gender composition of vendors. In the 1960s, both women and men sold produce, but the proportion of women vendors has increased since then, so that more than 80% of vendors are now women. In small rural marketplaces, almost all vendors are now women. Marketplace selling has now long been considered women’s work, however in recent years some men have overcome shame and embarrassment to return as vendors to the market.

Figure 1: Proportion of marketplace vendors who are women at the main marketplaces in selected PNG towns, 1961–2020 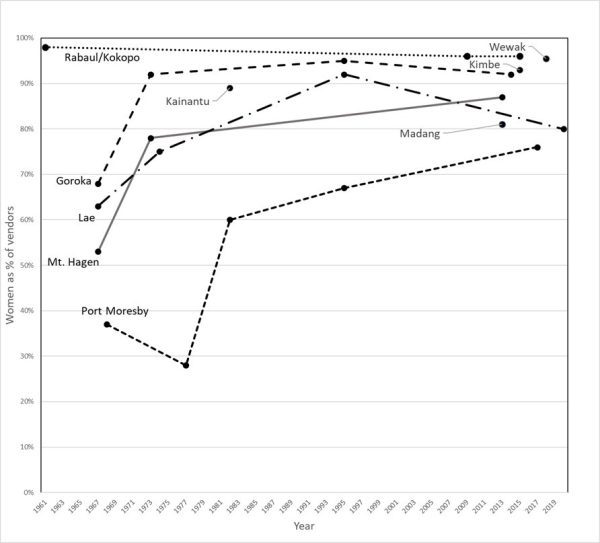 In the 1960s, transactions were most often between consumers and the people who produced the food. But since the early 1970s, there has been an increase in activity by intermediate traders and resellers. Many marketplace sellers are now heavily dependent on their market incomes. At the same time, significant volumes of fresh food are now moved within PNG, particularly from the highlands to lowland urban centres, and from the Markham and Ramu valleys to highland locations. Long-distance traders are more often men than women.

These changes we describe are all shaped by local Papua New Guinean ideas about social relationships, place, and exchange.

There are two main causes of the changes in PNG marketplaces over the last 60 years. First, demand for fresh food has grown with the increase in PNG’s urban population and the increasing affordability of local fresh foods compared with imported foods. Second, there is the search for money by both urban residents and rural villagers. The cost of living has increased for urban people, but there are limited formal employment opportunities. And rural people can buy decreasing amounts of imported food with the money they earn from the export cash crops that they grow.

These changes in PNG fresh food marketplaces have important implications for food security and PNG’s economy more generally. Most fresh food consumed in urban areas is sold through open-air marketplaces, so it is critical policy makers understand the changes that are occurring and how they may affect the supply and affordability of fresh food in the future. As urban resident resellers become more numerous in marketplaces, there is also a need for market governance, policy, and infrastructure that considers both urban resellers and rural producers.

Renewed development interest in marketplaces since the mid-2000s has physically transformed numerous marketplaces, however many of the marketplace redevelopments (such as that of Hagen’s main market) have failed to recognise the trajectory of change or have simply been outpaced by it. The development focus has also been on the main urban markets, however, despite their importance, small rural and urban corner marketplaces like that at Lopi in Goroka have received little attention.

While there have been many changes in PNG marketplaces over the last 60 years, some things have stayed the same. Produce continues to be sold in bundles, piles, or as individual items, rather than by weight. Bargaining was and is uncommon between buyers and sellers, although bargaining now occurs where fresh food resellers are active. And, as those who linger at Lopi in the late afternoon are very much aware, marketplaces remain critical social spaces as well as places to trade food.

This blog is also published on the Pacific Livelihoods website. It is based on an article in the Asia & the Pacific Policy Studies journal, ‘Market update: Sixty years of change in Papua New Guinea’s fresh food marketplaces’, by Timothy L. M. Sharp, Mark Busse and R. Michael Bourke.

This blog draws on data from numerous projects over time. The authors acknowledge funding support from the Australian Centre for International Agricultural Research, Curtin University, University of Auckland, the Royal Society of New Zealand, and The Australian National University.

Timothy Sharp is a research fellow within the Pacific Livelihoods Research Group at Curtin University, Perth.

Mark Busse is an economic anthropologist at the University of Auckland.